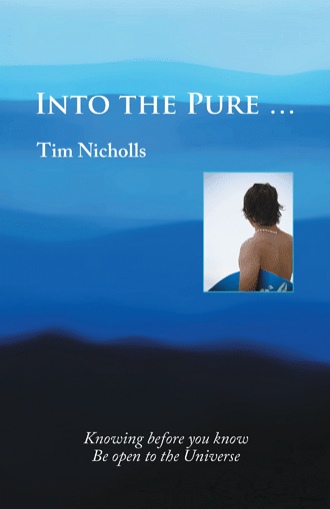 You need to live in the world that you love. I will discuss topics that give examples of empowering and enriching our lives. I came to believe that relating to people, having goals to make things happen, and wanting to be near others to help them was a great way to live your life. Power, self-importance, chaos, and intolerance is too much head stuff for me. I’m working on being grateful. Just being. Peace and happiness, please. Why not co-happiness? Understanding together. The brain and mind are distinct areas. They depend on each other. How do we get stuck on blame, self-importance, and intolerance? That’s not loving a life. Intuition is part of you, and if you want to find the way forward, this is it. Get a glimmer of something great and you latch on to the amazing power of higher intelligence! It’s the journey of communicating with your inner self. Like soulfulness and Zen, when paddling on the ocean waves. Intuition brings the peace in the midst of chaos. The ultimate philosophy is using intuition to help you know why you live and to find your place in the world. It is about nature. Sometimes in the new light of night, we find the way to be in the moment and discover a new world of existence. Einstein said it was a preview of life’s coming attractions. If you have been living in an inhospitable place, then new equality and powerfulness can empower a new life journey. I listened to and met up with the late Dr. Wayne Dyer, a clinical psychologist who helped people with self-actualization skills, yet time was to lead him to a spiritual representation of what made living alongside a spiritual world, that could provide better human endeavors. His forty-three books since his first, Your Erroneous Zones, gave new ideas to how you could structure your life. His writings were akin to earlier writings of mine, and we wrote in the same genre. On my first connection with him in Maui, I experienced challenging thoughts. We all need to be open to be guided by others. I had found new space in Hawaii, following suffering a major earthquake disaster in Christchurch City in New Zealand, and a couple of years on, after surgery of my heart to have a new artificial aortic valve put in place. Now in travels again, I found myself on the dusty drive to the cliff tops of Honolua Bay on the northwest corner of the island of Maui. Winter waves streamed from a wide ocean expanse into shallow water from volcanic rock shelves. You question being in such an environment, yet the power of nature is all supreme, and the occasion to kindle happiness with it is all-encompassing. From the cliff-top ridges you spot good surfers, powering from the right breaking point, waves ten, twelve, or twenty feet high. Not in summer though. Nature calms. But in winter it is the Holy Grail! My friends loaned me a slick yellow board—but with advice not to go out at that point. The reef will cut you to pieces, the brown sharks are big and fierce, and pro surfers will ride over you. I did go out. I had seen the website where these local sharks had been tagged and their presence noted when they surfaced from time to time. We shared the area, but as to where they were between each recorded ping was not registered. The power of the ocean’s giant waves was all-enforcing. There wasn’t room for concern. I managed to survive for a couple of days out there. Young and old surfers acknowledged we were on the wave together, body boarders with flippers had a place further along the wave, and were getting good play. On a much bigger wave day I was to be reminded that what the ocean energy gives, the laws of the ocean will take back! It had taken something of a paddle to get outside the wave break, which are big, expansive waters. I was now among the masters. Looking left, I saw a perfect wave, a surfer standing fully in tubular space, in the barrel, as it’s known, yet close to rocky coast that was impending danger while giving the wave its precious uplift. I was there, on the wave, off the wave—and then with a broken board, crashing into the reef, washing onto rocky hinterland, and certainly fearing the worst. The following waves were giants, breaking on the rocky platforms just near the surface of the embroiled water. My biggest wipeout on a surfboard! A damaged body to match the broken board. The doctor said the sea urchin spikes would find their way out, yet it took some weeks and feeling sweaty with a high temperature in a chilly New York until I realized my body was suffering. That last big reef urchin spike extended out enough to withdraw it, and oh, how the body cried relief! I rode with nature, my mojo back, a happy smile on my face, my existence joyful. It isn’t any different from listening to your inner being, and when you can devise life to focus on self, getting away from the impending torrent of ego life, then you can have a sweet nature. It’s about the being of our lives, being found through these activities and self-focus. I still have the surfboard fin in my study. Life goes on.

You have a hidden power, and with it you can learn how to create a better life. This hidden power is your intuition, and as Albert Einstein once said, “The intuitive mind is a sacred gift, and the rational mind a faithful servant. We have created a society that honors the servant and has forgotten the gift.” But how do we rediscover our intuitive minds? How can we harness this hidden power and realize our potentials?

In Into the Pure … author Tim Nicholls shares the key to his adventures, vitality, and experiences, and he explains how he unlocked the way that led him toward an intuitive understanding of spiritual empowerment. Being open to your own intuitive mind is about being open first to the spiritual dimension—the real you! And focusing on your inner self, feeling your body’s mindfulness, and developing meditative skills will give you the power to hear and interpret the intuitive messages emanating from within. From there, the spirit—the energy of life, the self—will become paramount to your understanding of your being. You will discover how it can answer all things.

Developing your intuition is about empowerment and working into the pure energy of your being, and this intuition is the way your inner self communicates. It will point the way in your life with amazing power. You need to get to know it as a close friend—as another voice in your life, shining from within.

Tim Nicholls lives in Christchurch, New Zealand, and as a Fulbright Scholar he studied media and journalism. He created the boutique hotel Off the Square, located in New Zealand, and he has a strong creative sense and has conducted business in housing development and construction. Tim has also developed his own school in New Zealand as well as a program aimed at developing youth voices around the world. You may find Tim surfing the waves in Honolua Bay, Hawaii, as Tim is a swimmer, surfer, Ironman triathlete, and multisport participant.