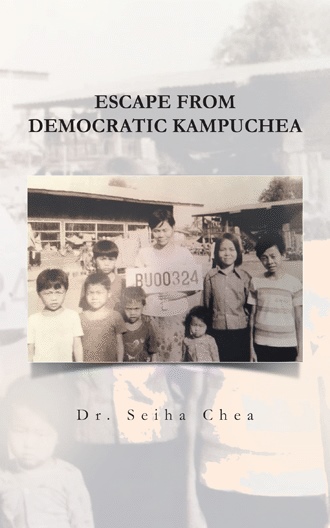 When the extreme communists known as “Khmer Rouge” marched into Phnom Penh, on April 17, 1975, the majority of Cambodians were jubilant and regarded them as heros who had just liberated the country from its political and social turmoil. Their joy and enthousiasm soon turned into shock and horror. The Khmer Rouge founded Democratic Kampuchea, a totalitarian and genocidal regime in which educated professionals (doctors, teachers, officers), merchants, entrepreneurs, the wealthy and anyone opposing or resisting their revolutionary idealogy were systematically and brutally executed. Following their four years in power, 1.7 million people (21 percent of the country’s population) died from execution, forced labor, starvation and diseases. One survived to tell his story. Dr. Seiha Chea’s predicament was doubly precarious as he was a doctor in the service of the ousted administration. Even though he was a prisoner of war whose life was constantly threatened, he dispalyed great courage and proactively helped others. When he was compelled to flee leaving behind him his wife and their seven young children, he spent weeks without food and water in the forest, alone and injured. Eventually, he ended up in Thailand, then France. In both countries, he continued to safeguard the welfare of fellow Cambodian refugees meanwhile worrying and searching for his family. This true story of his grim existence and harrowing escape from the Khmer Rouge’s reign of terror reads like a fast-paced thriller. Moreover, his experience provides a glimpse into how medicare was administered during Democratic Kampuchea. This memoir is translated from his original khmer book (2014) which has sold more than 3,000 copies.

This memoir recalls his traumatic experiences under the genocidal regime, which unfold like scenes of a fast-paced thriller. Dr. Chea is now retired and lives with his family in Phnom Penh, Cambodia. He can be reached via email at 1seihachea@gmail.com.

Dr. Seiha Chea was born in 1938 in Cambodia when it was still a French protectorate. He witnessed his country’s tumultuous transitions from a French colony to independence, absolute monarchy, Khmer Republic, Democratic Kampuchea, the People’s Republic of Kampuchea (under the Vietnamese), the state of Cambodia, and its present-day constitutional monarchy. He was a government doctor until 17 April 1975 when the Khmer Rouge seized control of the country and subsequently founded Democratic Kampuchea, which was anything but democratic. Treated as a war prisoner by the Khmer Rouge, his life was constantly under threat. Although it is commonly assumed that the Khmer Rouge completely abolished medical care (as all educated professionals, such as doctors, were massacred), Dr. Chea’s first-person account provides a glimpse into how medical care was administered in democratic Kampuchea and serves as an invaluable historical record. Circumstances compelled him to escape from the Khmer Rouge’s reign of terror. He fled to Thailand after surviving weeks without food and water in the forest, alone and injured. Subsequently, he made his way as a refugee to France. Notwithstanding health and other hazards to his own well-being, Dr. Chea actively safeguarded the welfare of the Khmer refugees in both Thailand and France. He also strove to let the world know the truth about the Khmer Rouge’s atrocities through a newsletter and association he started in Paris.