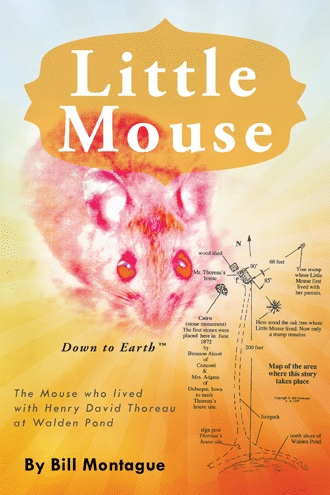 Preface This story is based on facts from Henry David Thoreau's book Walden (first published in 1854), and from his Journal. It follows his life at Walden Pond step by step in the building of his house and through the months he spent recording his thoughts. In Walden, in the chapter title Brute Neighbors, while building his house, Thoreau mentioned a mouse who became friendly with him just after he had laid down the first layer of floorboards. In Little Mouse ten of Thoreau's more interesting statements are woven into the story, then translated into words easily understood by young readers. (These quotes are printed in bold typeface.) It is my hope that this book will inspire children (and you too!) to read Walden - one of the great masterpieces of American literature. Bill Montague

“Little Mouse is a Beauty!” Walter Harding (1917-1996), renowned secretary of the Thoreau Society for 50 years and author of The Days of Henry Thoreau Had this to say: I have read your Little Mouse with delight. What is more, both my wife and mother-in-law picked it up and were as delighted with it as I was. I liked your device of having Thoreau’s more complex statements being translated into mouse talk. From a strictly factual standpoint, outside the fairy-tale framework I believe everything is historically correct. Thank you very much for letting me see your charming little tale. Best of luck with it. June 9, 1980

I grew up in Boston, Massachusetts, and moved to Concord, Massachusetts, in 1976. After finding and reading Henry David Thoreau’s book Walden, I was move by this book that I felt it needed to have a factual fairy tale to attract young readers and older readers to this great book. In Walden, under Brute Neighbors, he mentioned a little mouse that moved into his little house and soon became friends. I decide to base this story on this little mouse. But I wanted it to be factual; in other words, I wanted it to be based on what Thoreau himself learned about mice. So I went to the library and found his journal. In the index, I looked under “mouse. “ Lo and behold, there were about twenty-five places in his journal where he spoke about mice. So I copied all these pages and then proceeded to write this story based on what he had to say about mice. I self-published five thousand copies myself then started to sell them here in my retail shop in Concord Center. It took about ten years to sell them all. Then I asked the artist if she would do a new cover for the next five thousand. The date on the cover art work is 1996. A year later, on September 11, 1997, as I opened my front door to my gallery at about 9:30 a.m. here on Walden Street, there stood a little mouse on the sidewalk! Something took my attention away; perhaps the phone rang. Well, I forgot all about this little mouse. The very next morning, as I opened my front door again, there was that little mouse standing there on the sidewalk. This time, it got my full attention. I walked back into my gallery and grabbed my 35 mm film camera with a telephoto lens and went outside. By this time, it started to walk up the alley next to my gallery that led to a parking lot. I started to take a few photos as it walked away from me. Then I said out loud, “Stand still so I can take your photo.” Well, it stopped and turned around and faced me. I zoomed in with my telephoto lens and took a picture. Then it turned around and continued to walk up the alley and out of sight. I never saw it again. About two weeks later, I had my film developed as this was before digital cameras. When I looked at the photo where the mouse posed for me, it somehow looked familiar. I held it up to the painting that Maxine Payne did for my new cover. They matched perfectly! You can see by the photo below. How did this little mouse know how to pose so it would match the cover painting on my book? It’s one of the mysteries of life that we just have no answer for. Bill Montague