When Time and Eternity Kiss

A Bold New vision of Human Destiny, God, and the Bible 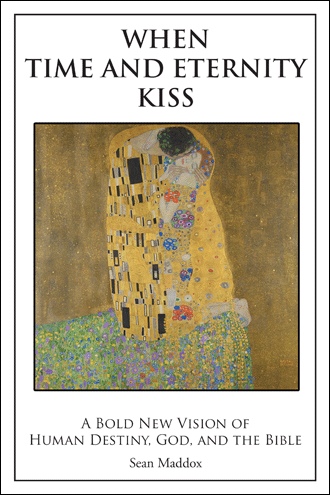 THE NAMES OF GOD
THE GENESIS OF CONCEALMENT
“You are indeed a God who concealed Himself.”
Isaiah 45:15
“God is One, but many are the names,” states a Hindu proverb. This idea is true of the Bible’s God as well. For thousands of years poets, philosophers, theologians, and authors of the world’s sacred texts have wrestled with the matter of how to express the multifaceted natures of the “Great Mystery” with words. The Bible’s authors confronted the same daunting problem of presenting the many concepts of divinity without suggesting a pantheon of deities or assigning limiting constraints on God.
The Bible’s authors solved the problem in highly imaginative ways. They selected metaphors and archetypal symbols both to reveal and conceal the Masculine and Feminine sides of divinity as they become manifest in corporeal life. The primary biblical symbols for the Masculine Principle include the following: air, sky, breath, wind, eagles, fire, the Sun and day. Symbols for the Feminine Principle include: water, seas, wells, caves, mountains, the Earth, the Moon, the night, the Deep and wisdom.
The Bible’s authors also chose to paint the innumerable “faces” and natures of the Bible’s God with names, although they understood clearly that ultimately God cannot be defined or named. Of the Bible’s numerous Hebrew names for God, Elohim, YHVH Elohim, and YHVH are the best-known. The other names include the following:  El Shaddai, El Elyon, El Olam, El Berith, El Roi, Eloah and Yahveh Sabaoth. The most curious of these, El Shaddai, which generically translates as “God Almighty” in English, literally translates as “The God of or with Breasts.” Of the oldest of God’s names, it is the most direct reference to the Goddess in the Bible. The first reference to El Shaddai occurs in Genesis 17:1, in which She addresses an aged Abram:
“When Abram was ninety-nine years old, the LORD appeared to Abram and said to him, “I am El Shaddai. Walk in My ways and be blameless. I will establish My covenant between Me and you, and I will make you exceedingly numerous.”
The three most celebrated and prolific names for God in the Hebrew Bible follow. ELOHIM refers to the Creator in Genesis One and is key to understanding why God shattered the peace of the Eternal to create life in time and space. The name is intriguingly plural and both masculine and feminine. YHVH ELOHIM is the anthropomorphic potter-Creator of the first man and woman, Adam and Eve, in the Garden of Eden in Genesis Two. YHVH, known as the Tetragrammaton, appears alone and without ELOHIM only after Adam and Eve are expelled from the Garden of Eden. ELOHIM appears 2,500 times in the Bible and is second only to YHVH, who appears more than 6,800 times.
YHVH is Judaism’s most revered name for God. The mysterious name is translated both as “I Am” and “I Will Be Who I Will Be.” (Ex. 3:14) “I Am” embodies the deity’s eternal state of “Being,” whereas “I Will Be Who I Will Be” clearly expresses God’s dynamic “Becoming,” which is realized in time and space. While religious Jews never pronounce or write God’s Holiest Name, Christians add the vowels “a” and “e” and transform the purposely unpronounceable consonants YHVH into Yahveh or Yahweh. Through a faulty and inaccurate mistranslation of the 16th century CE, many Christians call YHVH “Jehovah,” an appellation that unfortunately captures nothing of God’s mysterious natures and persists as a glaring and erroneous mistranslation from the Hebrew to the present day.
By ensuring that YHVH is unpronounceable, the Hebrew authors brilliantly overcame two major problems inherent in naming God: names define natures and establish limits. By transforming the four consonants YHVH into “Yahveh,” divinity is anthropomorphized and God’s name concretized. This change undermines the esoteric intent of the writers who chose YHVH to express the inexhaustible and ultimately inexpressible dynamic creative energy of the Ineffable, Unnamable Mystery of Life of which YHVH is a singularly grand incarnation.
Of paramount importance, the authors used the Tetragrammaton both to conceal and reveal God’s balanced masculine and feminine attributes. The four consonants left open the possibilities that the addition of vowels restrict. Yahveh is neither as enigmatic as YHVH nor is it a revelation of God’s two-gender nature, as is YHVH.
YHVH reflects divinity’s masculine and feminine sides: “Y” and “V” are masculine, while the two “Hs” are feminine. Kabbalah (mystical Judaism) holds that the first H stands for “Mother,” while the second represents “daughter.” Together the “Hs” are analogous to the archetypal mother-daughter connection or “mother line” that links all women back to the primordial Great Mother Herself. The Kabbalists define the four letters as a quaternity of divinity, each letter symbolizing a member of the Primal Holy Family:
•    Y is called Father and represents wisdom
•    H stands for the Supernal Mother and represents understanding
•    V is their son
•    H is their daughter
With a repertoire of stories, poems, legends, mythological motifs, and fragments of history, biblical authors engage God’s many names to create the presence of a single God of myriad natures to be known, experienced, and integrated by readers. Through our developing consciousness, the esoteric and ineffable Hebrew names for God offer us vision into and revelations of God’s highly complex and paradoxical natures. Without a knowledge of these original names, profound and invaluable insight would be utterly lost to the reader. The generic translations, “God” and “LORD God,” are, alas, entirely inadequate for a comprehensive and astute study of both God and the Bible.

A LIFE-CHANGING SPIRITUAL MASTERWORK
ON GOD, HUMAN DESTINY, AND THE BIBLE
A UNIQUE SPIRITUAL JOURNEY GUIDE

When Time and Eternity Kiss is a boldly provocative and highly original new interpretation of the Bible--a page-turner for believers, seekers, skeptics, and secularists alike. By harmonizing the Bible with 21st c. quantum physics and the "Big Bang" theory, Maddox leads us into the labyrinth of God's mind.

What are we? Where do we come from? Do we have a destiny? The Bible proclaims: "You are gods." What does that mean? Is there an objective reality or just the illusion of one, as Eastern spiritual traditions assert, quantum physics theorizes, and Einstein suggested?

In When Time and Eternity Kiss, author Sean Maddox argues passionately that the Bible answers life's most perplexing questions. He supports his propositions by integrating wisdom and insight from mythologies, biblical Hebrew, Kabbalah, Hindu Chakras, Buddhism, psychology, archetypal symbolism, dream work, and quantum physics. His multidisciplinary perspective allows readers to see with new eyes how the Bible is the spiritual guide par excellence to the psycho-spiritual evolution of divine and human consciousness.

INSPIRED, GROUNDBREAKING SCHOLARSHIP
This revolutionary work is the culmination of the author's twenty-five-year journey of psycho-spiritual inquiry, study, and singular personal sacrifices. Maddox emerges as a daringly independent scholar and visionary who peers into the Bible's riveting mysteries and reveals God's Feminine Side in the texts. Aptly titled, When Time and Eternity Kiss is a passionate cosmic love story from start to finish.

At the climax of the book, Maddox upends traditional interpretations as he illuminates the two Genesis Creation stories and shares his vision of why God shattered the silence of Eternity to create life in time and space. In radiant lucid prose, Maddox restores the Bible to 21st c. relevancy as the cornerstone of Western civilization.

Author Sean Maddox enjoyed a spiritually abundant but financially impoverished childhood on an Oklahoma farm. At age fourteen his family moved to Colorado. After majoring in theatre at the University of Colorado, he joined the U.S. Air Force. Following discharge, Maddox married and relocated to Toronto with his Canadian wife. In less than two years he became the managing director of Toronto’s highly acclaimed International Caravan Festival, produced multicultural presentations for Queen Elizabeth II and former Prime Minister Pierre Trudeau. Maddox later served as executive director of Theatre Ontario, publishing a monthly theatre magazine, producing theatre festivals, and managing professional theatre training programs. A decade later he returned to Colorado with his wife and son.

Unable to find work in his field, Maddox transitioned successfully to business, working twenty years for two major American corporations. As he approached the apex of his career, he suffered a near-fatal fall from a ladder and a midlife crisis, which launched his spiritual journey and extensive studies in mythology, depth psychology, Kabbalism, and world religions. He was ultimately inspired to write When Time and Eternity Kiss, which is the first in a unique trilogy of books on the Bible that proves the Bible is the spiritual journey guide book par excellence. Sean lives with his wife, Susanne, in the San Francisco Bay area.