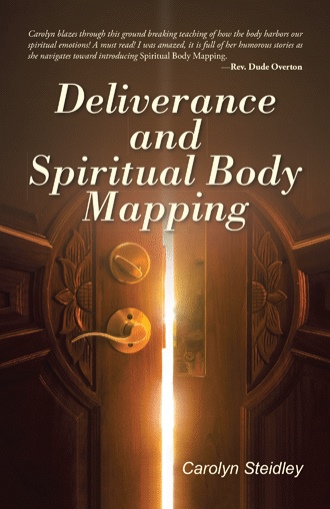 I have to laugh when I recall the first time I was asked to do a deliverance situation without one of my teachers. I received a phone call about 10:00 pm one night. It was my cousin’s husband. He said Denise; my cousin was at work at the hospital that night and every time she would talk to someone about the Lord she would double over in pain. The pain was intense, and she needed my help. What? My help? “Ok,” I said, “Come over.” I hung up the phone and thought to myself, ‘what am I going to do?’ I immediately went into the bedroom and told my husband, “I am not sure, but I don’t think you should be sleeping while we do a deliverance.” Now, you have to understand, my husband was still bartending and had not accepted Jesus as his savior yet. To be honest, this deliverance stuff freaked him out. I heard the knock on the door, and I opened it to see Jeff supporting a slouched-over Denise. My mind raced, “Lord, what do I do?” I sat her in a chair and looked at Jeff. “Jeff, you are going to have to help me.” “No problem.” came his answer. We began with the renunciation and forgiveness prayer, which she repeated. I then started to call out different names of spirits as the Lord gave me discernment and word of knowledge. She began to heave; I grabbed a towel! I looked over at my husband to see him sitting in a chair across the room reading the Bible. I looked closer, and the Bible was upside down! Fear froze him to the chair! He was terrified! I was a busy, and I could not worry about it at that moment. I continued working on Denise. She vomited into the towel. I asked her, "What did you have for dinner?" “fish, why?” she answered. I said because what I am looking at is not fish. What I held in the towel looked like a piece of beef liver. As soon as she threw it up, she was out of pain. In the weeks to follow, Denise was healed of a hernia! We learned deliverance and healing go hand in hand. Deliverance gets rid of the entity that causes problems in the body. Once it is cast out, then healing can begin. After this event with Jeff and Denise, the family started to understand I had not fallen into a ‘cult thing.’ They realized there was a ‘God-thing’ going on. One day, I received a phone call from a couple from the church I attended. They were having problems and wanted to talk to me. I had already discerned this couple was dealing with demonic activity but had not had the opportunity to minister. The husband wanted to know when I could come to their house. I told him I would need to get back to him and called my mother for help. Mom was very hesitant at the thought of actually getting involved in deliverance. So she made me promise that I would not do a deliverance while she was there; that we would just go to counsel the couple. I agreed. I called the couple back and set up an appointment. A few days later, mom and I pulled up to the couple’s house. It was an older small home perfect for a new couple starting out. We sat in the small living room and began to talk. They were having marital problems. But as we continued to talk, the demons in the husband began to manifest. I have learned that the children of the Lord, who know their authority in Christ, walk in an anointing that the Adversary recognizes and hates. Demons will manifest when the anointing is present. So here we were, the couple seated in two chairs across from mom and I. As the demons in the man became more prominent, the man’s ears ran up the side of his head and stood out. The man’s countenance changed and became contorted. He looked like something out of a science fiction movie! In the natural, it was unexplainable. I looked over at mom, knowing I had promised not to do deliverance. She looked startled and later told me she saw an angel standing behind the man and the angel told her it was ok. That was the beginning of mom and I becoming a team in deliverance. She has since penned a book entitled, ‘Are you Ready for War’ by Victoria Simpson Linder. Mom and I have worked for many years in this type of ministry. The deliverance ministry is something I did not seek after! It is terribly exhausting and, to say the least, dirty. But when confronted with a person who needs a deliverance - I will not back down. It is important to know the difference between deliverance and exorcism. Francis MacNutt, puts it this way, “Exorcism is a prayer to deliver someone who is possessed. Whereas, Deliverance is a prayer to deliver someone who possesses or is oppressed by an evil spirit.” _ I have been involved in both types of ministry. Through the years, the Holy Spirit began to use ways that would expedite the deliverance process. I need to preface this next chapter with, ‘please understand there are no formulas with the Lord.’ He is sovereign and will do things as he sees fit. So understand I am not giving you a ‘formula’. I am giving you something to add to your repertoire in diagnosing, freeing and releasing a person

“Will you go to hell for me?” asked the Lord. I remember standing in my living room stunned. It took me a few days to be able to answer him. I replied with a shaking, “Yes.” He then took me in a vision to the gates of hell. I could smell the sulfur and feel the heat. The gates were huge thick black iron, they swung open as I approached. I was standing on stepping stones just big enough for my feet and lava swirled around the stones. I heard the Lord’s voice, “Don’t be afraid Carolyn. I have a net around you and yours.” I looked and saw a large net all around me. I continued along the stones and then I saw it - a hand reached desperately to me out of the lava. I grabbed a hold and pulled for all I was worth! The vision ended. From that vision, I learned there are people all around us who are in the own personal hells. We are to set the captives free! The Lord gave me a way to help. It is called Spiritual Body Mapping and it works! It is an amazing way to quickly diagnose and target the strengths as well as areas that need to be addressed in an individual’s life. As you read this book, I pray for the spirit of wisdom and revelation to enlighten you. God Bless you, Carolyn Steidley

In 1982, after experiencing supernatural manifestations in my home, I was introduced to a woman who worked in the deliverance ministry and helped rid my apartment of unclean spirits. I then began to train under her and other ministers, as well as studied such teachings as the great deliverance pioneer, Derek Prince. I continued my education by attending Fresno Pacific University. The Lord has allowed me to work in almost every aspect of the church; to include working as a church custodian, church secretary, Youth Pastor, Associate Pastor, Executive Church Board member, as well as serving as an armor bearer for three different ministers. Out of this training came my ministry in healing and deliverance. Currently, my husband and I are Senior Pastors, and together we travel across the United States speaking by invitation in churches and other venues organizing and training ministry teams in healing and deliverance.