WITHOUT WINGS Book I

TO SAVE A SOUL 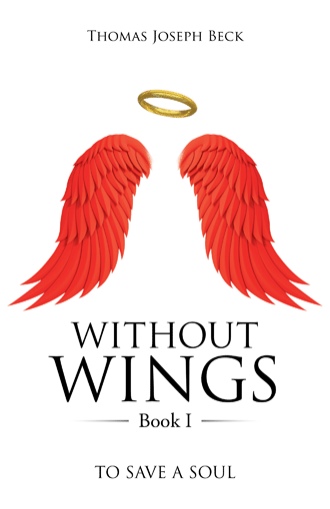 The fishing boats lined up like warships. “Get yer blues here!” the fishermen yelled from every dock, each trying to sell the day’s catch. The sun thawed the earth as it awoke from a long winter’s nap. Springtime in Sheepshead Bay, Brooklyn. down Emmons Avenue, Nicky drove his 1973 Cadillac El Dorado. This was his neighborhood, or as Nicky, Chips, and the Hump called it, “territory.” Their territory ran from Old Mill Basin to Coney Island. Old Mill Basin to Coney Island was a huge territory. There are many diverse ethnic groups. Old Mill Basin is a middle-class Italian neighborhood. This is where Nicky, Chips, and the Hump live. It ends at King’s Highway and on the other side starts Marine Park and Gerrison Beach. These are predominantly Irish. If you go down Knapp Street toward the Belt Parkway, make a right, you’re on Emmons Avenue, which for the most part looks like a small fishing village at the end of New York City. Sheepshead Bay was also Italian. Follow Emmons Avenue, make a left onto Ocean Parkway, and you’re in Coney Island. The Brooklyn Aquarium is there. When you’re finished looking at the whales you can ride the Cyclone, then go have one of the world’s greatest hotdogs for lunch. Nathan’s is one of Brooklyn’s proud landmarks. They say the Egg Cream was invented here. An Egg Cream is an invigorating drink made with chocolate or vanilla cream and seltzer. The Egg Cream doesn’t have egg in it. But on a hot summer’s day, who cares? Unfortunately, Coney Island is the poorest of neighborhoods. Nicky made a left onto Bedford Avenue. He drove past one of his favorite bars, Captain Quarter’s. Nicky, Chips, and the Hump joked that if you couldn’t get laid in Quarter’s on a Thursday night, you were either a priest or a fag. Thursday night was ladies’ night at Captain Quarter’s. All the nice, pretty Jewish girls from Brooklyn College would come. Brooklyn College was at the end of Bedford Avenue. Bedford Avenue looked like a historical destination. Huge Oak Trees lined the streets in front of all the Victorian-style homes. It’s as if you were suddenly transported back to the South, before the Civil War. Affluent Jewish families lived there. Doctors, lawyers, bankers. Their children went to college so they could become “somebody.” The girls went to college, met a future doctor or lawyer, and married him. This was their cultural heritage. But Thursday night was their chance for a brief escape. They’d put on tight bell-bottoms or a miniskirt and head down to Sheepshead Bay and Captain Quarter’s. They were going to “the other side” where the middle class lived. Quarter’s hosted various groups of people: the fishermen who worked the boats, garbage men, transit workers from the depots in Coney Island, wannabe wise guys, and the real wise guys themselves. Normally it was a volatile place, a volcano waiting to erupt. But on Thursday night, it was different. Everyone got paid from a long, hard workweek. Time to party, blow off some steam. Maybe meet one of the “nice Jewish girls,” buy her a drink, maybe shoot a game of pool. And—if you got lucky—hopefully she’d put out. For those young ladies that did, the next day they’d blame the booze. And life carried on. The Godfather was the movie to go see. Some of the young Italian men acted as if they were in the Corleone family. But not Knick Knack, Chips, and the Hump. They were already in a “Family,” the Capozzoli family. And if you wanted to stay healthy, the Capozzoli Family didn’t exist. That was the unspoken rule. You were either in or “mind your own business.” Everyone in the Family had a nickname. Nicky Vocci, Steve Dimarzo, and Sal Capozzoli were known as Knick Knack, Chips, and the Hump. These names sound like they came from a children’s book, adorable characters teaching the ABCs. These individuals, however, were vicious psychopaths, underworld urban royalty. They ruled their territory by quiet but deadly intimidation and murder. For the last ten years, they’d been on a fast track. They had money and power, and it all satarted back in the summer of 1963 with a cop named Big Al Gilinski. Big Al Gilinski was a football hero back in the forties. He’d played fullback for Madison High School and won a full scholarship to Michigan State University. But in the spring of ‘46 His father died of a heart attack. Al stayed home to take care of his mother and three sisters. In 1949, Al graduated from the academy and became a cop. He was six-feet-six-inches tall, two hundred forty pounds. Dark, thick hair and dark eyes. His face showed a hint of humor on a surface that was hard as a rock. Al was also a closet intellectual and became an expert in the study of the humanities and social science. The streets of New York City were his classrooms. In 1954, Al was made the youngest detective in the NYPD. And the biggest thrown in Salvatore Capozzoli’s side. The newspapers dubbed their continuing conflict Big Al Vs. Big Sal. Everyone but Al and Sal was amused. After nine years of this, Salvatore Capozzoli’s right-hand man, Joey Vocci, a.k.a. Joey V. had had enough. Al had just sent to jail some of their best soldiers, two judges, plus an assortment of cops who were on the payroll. Al had to go, and on a summer morning in July of 1963, Joey V. lay in waiting outside of Al Gilinski’s home. When the big cop left his home and went to get in his car, Joey V. sprang into action. He ran at him, firing his gun. Al, ever the athlete, displayed some acrobatic moves and shot Joey V. dead. That was Nicky’s father. Soon, Al would face the revenge of sins of the father from the son.

In a mob hit gone wrong, notorious gangster Nicky Vocci takes a bullet to save an innocent mother and child. The next thing he knows, he wakes up in an auditorium with six female angels. Impressed with his dying act of sacrifice they offer him the opportunity to save his wretched soul. He must help the good angels fight the demon angels, by helping troubled humans. They send him back to earth with a new body and a new name: Daniel Peter. His mission: to save Lily Flowers. The demon angel named Insecurity is tormenting Lily, pushing her down a dark path filled with alcohol, drugs, and all the wrong men. Daniel must help get her back on track, and convince her she is worthy of a good man namely Liam Patrick, a childhood friend of Lily’s, philanthropist, and all-around good guy. Their falling in love will save her. There is one small problem: Liam can’t stand Lily’s new lifestyle or the company she’s been keeping. For her own part, Lily thinks Liam has grown self-righteous and boring. Not to mention that if the demon angel Insecurity discovers who Daniel really is, he will destroy him. Other than that, it’s is a piece of cake.

My name is Thomas Beck I live in Boca Raton, Florida with my wife Elizabeth. I have been writing short stories and bad poetry for 20 years. “Without Wings” is my first published work. The novel is an allegory that I hope entertains and inspires all who read it.