Love in the Third Age

A bitter sweet story about an overweight, out-of-love, aged care worker, approaching 60, gripped by revenge and faced with the burning question – to do something about his life or decline? 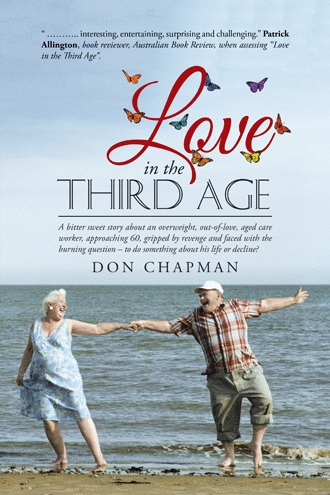 Love in the Third Age is set in the beautiful present-day Willunga Basin of South Australia at a time in Bruce River’s life when his youthful vitality has drained from his body, and all he is left with is the memory. An overweight, divorced, out-of-love, aged care worker, Bruce is about to turn sixty and coming face-to-face with the burning question—to do or to decline?

Bruce’s life is presented as a roller coaster ride of battles with a bad back, impotence, and diminishing career prospects, while at the same time telling the comic stories of his online love life and his nearest and bitterest. Some of his friends are in their third age and going through similar confronting experiences. His clients and mother are in their fourth age and having a tough time. His much younger ex-girlfriend hasn’t even thought about getting older and is bent on revenge against him and won’t take any prisoners. Other characters are equally challenged by aging, but flying brilliantly above the mess.

At times, Bruce is torn apart as he must witness the struggles of those aging before his very eyes. He is gripped by the writing on his own wall, battered and bruised by a cunning woman scorned, yet determined to find a way through the rest of his life that will bring purpose, dignity, lasting love and some kind of inner peace.

If you’re approaching, experiencing, or even worn down by aging, Love in the Third Age may just turn all that around and give you many moving and funny moments to laugh at both on your own and with others.

Don Chapman has been a freelance feature writer for Nation Review and London Australian Magazine. He is a playwright and wrote his first book, 1788: The People of the First Fleet, published by Cassell Australia, in 1981. Five of his plays have been produced in youth theatres, a London pub, and the Adelaide Fringe. In 2010, Don won the Fleurieu One Act Play Competition. Love in the Third Age is his first novel.

Don currently lives with two of his children and writes, works, walks, and loves in the Willunga Basin, just south of Adelaide, South Australia.