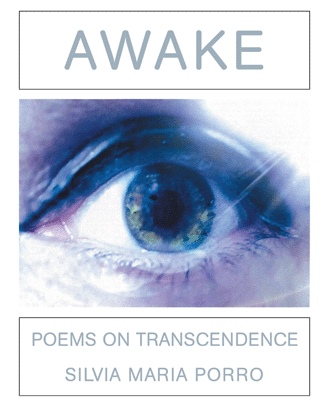 Introduction “Awake” is a collection of poems expressive of a timeless life; in sleep, transcendence and wakefulness. It is a personal journey, honoring of life, connection, reciprocity, truth and evolvement, inherent in all of us. I began this writing, at a time of deep transition, in my life. Within the pages of this book lie an expression, integration and transcendence; a living, breathing chronicle. Its unifying story is shaped by the greatest catalyst for my spiritual development; my mother.

The verse in “Awake” accedes pain and loss, in layers of consciousness and change. Thus, it is not exclusive, in its definition. The life force that carries its message travels across species and opens with “Extinct”; an ode to the largest Earth-dwelling mammal whose inter-relation with the human race carries the potentially fatal hazard of its abrogation. As such, this expression becomes its voice as well as a calling to the highest human consciousness; that which carries a knowing of the inter-relation of all living organisms. “Extinct” is the first poem of the first chapter, entitled “Sleep.” It shines a light at the unconscious nature of a yet unrealized, destructive action that is, at once, in human hands, inhumane. This awareness is also called upon through the poem entitled “Waiting.” “Waiting” reflects a depiction of human indifference toward an extraordinary canine fidelity. Its social meaning reflects a discarding of an earnest life, symbolizing a false superiority. It bears witness to the fate and irony of many animal harborages, in today’s society that cut healthy lives short. “The Blue” depicts the need for human consciousness to awake to the endangered existence of the largest breathing animal to inhabit the Earth’s oceans; The Blue Whale. Their numbers are endangered due to whaling, entanglement in long-line fishing gear, ship strikes, military sonar & weapons testing exercises, oil spills and climate change. It is in a literal, actual sense, the greatest call to life as it is, at once, potentially, the greatest blindness. In our inter-relation with animal species sharing our blue planet, human consciousness is marked both by action and its inaction. “LionHeart” depicts the transforming power of courage-an unrestricted part of the whole. I have integrated the theme of a collective consciousness in my work, over the years-both in paintings and the written word. For me, there is little else more reflective of our transcendence and evolution than our ability to connect with a living consciousness and step out of ourselves to see that connection and bridge the gap between us. This gap is where the greatest consciousness resides; the seeds of evolution. We must acknowledge the life that flows through all of us if we are to prevent its extinction.

Within the pages of this book lies the knowledge that deconstruction is a part of the change that precedes its transcendence. Also present, in this work is a vestibule of layers of sub-consciousness, consciousness and a deeper consciousness that may be interpreted as a transcendental shedding of the physical skin. It is an expression of an evolving non-physical consciousness. This living process may be internalized through the reader’s interpretation of “Ninth Sleep”, “Traveler of Space and Time” and “Moon Roving.” “A poem for my parents,” “The grandest landmass,” and “His house on the hill” pay homage to my family and my Cuban-American heritage. Chapter two is entitled “Rebirth.” It carries poems expressing a rebirth of life, transcendent love and joy. It carries moments filled with connections; the dance and fluidity of an awake life. “Each day, “S.O.S.” and “Power of Grace” give voice to social consciousness, the oppressed and their inherent liberation. “Each day” and “Power of Grace” honor the extraordinary power, love and courage of women; that which is revealed through a disarming, subtle, inter-generational sexism and transformed through the evolvement of Grace (the “Power of Grace.”)

“Each day” gives voice to the evolution of human consciousness by raising awareness surrounding the Humanitarian infallibility that supports the civil rights of life partners, regardless of gender. This book strives to express a liberation from labels, concepts and judgments that blur a reciprocity with a collective consciousness; a union with The Divine. “Each day” bears witness to a dismissed, powerful love; that which sheds light on the invisible, thereby making it, visible. It illustrates a social denial that is alienating, in the face of loss.

“Ascent of the Gods” elucidates a sacred communing with the Redwood trees that live in the forest of Muir woods, on the coast of Northern California. It shares a personal journey; bathed, centered and transformed by what may only be succinctly described as the presence and breath of God. The ancient inhabitance and requited inspiration towers over me, in sublime awareness, still......... I feel whole, supported, protected by a guiding spirit. In those moments, I live continually, in a sustaining wisdom. This poem honors this spirit by bearing witness to an omnipresent sentience, as well as the transcendence of a lower-level consciousness. This lower-level consciousness endangers the Earth as well as environmentalists protecting it. Its peril lies in the deforestation and pollution that fronts global warming. These environmentalists and investigating reporters are endangered and threatened through pecuniary manipulation (the carrot) and physical threat (the stick). The origin of this contrasting consciousness involves commercialism, upheld, through the destruction of the Earth’s natural resources. It describes one perspective surrounding the process of finding one’s deepest identity, uniting with Nature, in our journeys through the Earth, in this life span.

As such, this verse is an awakening to prevent the destruction of the planet we inhabit, and its surrounding atmosphere.

“Awake,” the last poem of the series, depicts a deep calling to transcend a progressive, powerful disease, over a span of a lifetime, on an intra-personal and inter-personal level. It acknowledges this potentiality, in all of us, in our human experience. It calls for its perseverance and knowing; that of the evolvement of a transforming, healing empowerment. It speaks to the power of the human spirit to transcend disease. Again, it is within the reader’s discernment that she/he may relate their world to come to these written words. The underlying energy that carries the message that is “Awake” is a collective consciousness that is its vehicle. As such, it is my hope that this body of work may be a means to awaken, in the reader, an evolvement of her/his deepest realizations.

The cover photo of “Awake”; a human eye, denotes a deep reflection and awake state that is, hopefully, enduring, revealing and transforming. It is a connection; a revival that opens a conscious life.

Every being I have loved lives in these pages. I consider it a great privilege to be able to express a piece of their lives, as they have united with mine. I am very grateful for all those beautiful, beloved beings who co-created this living chronicle with me. I have gained lifetimes of wisdom through the Grace of your presence, in my life. Thank You.

Awake is an expression of source—that collective consciousness that awakens, flows, evolves, and ascends through all living beings. I began to write Awake fifteen years ago. Its voice has evolved, along with my own, through awakenings that have brought into my life my most meaningful connections with source. I know they’re continually evolving in an awakened state.

The voice that is Awake travels from intimate moments of connections and the transcendence of life, love, joy, and loss to the empowerment and evolution of cultural, familial, gender, social, and sexual identities.

Her personal, spiritual transcendence has allowed her to intuitively embrace empowering, freeing truths.