A Nurse’s Journey of Healing With Angels 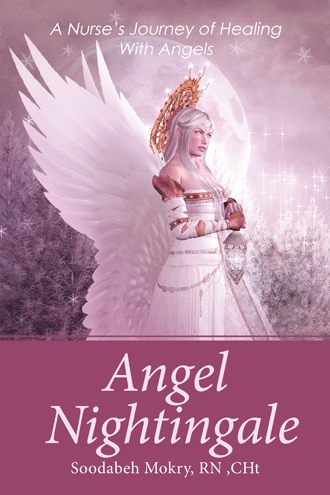 I sensed that the man before me was not sleeping but dead, yet all I could see was his thinning hair—beautiful, dark wisps over a shiny scalp. I longed to touch them. I began to feel I had touched them, that I intimately knew their curl, the stubbornly flat spots, and the way the hands of the man fussed with them. I had seen those hands, that hair, that fussing in my bathroom mirror. My husband. “Hameed!” I screamed and fell toward this dead man.

I sat up. A murmur from my lap oriented me. I was holding Azeeta, my two-year-old daughter. We were in the two-bedroom house my two kids, my two brothers, my mother, and I shared in Iran. Azeeta settled and stayed asleep, and I stood up to put her to bed. I heard the constant blare of car horns and vendor calls outside the window, which was open in a weak effort to circulate the steaming August air. It was late afternoon, and I’d fallen asleep after working a busy shift in the university hospital and taking two buses each way for the privilege.

I went into the kitchen to make dinner. Cyrus, my six-year-old son, was playing with his toys in the living room, talking to them as if they could really hear him, bursting into laughter at times.

“Cyrus, could you please be quiet? Azeeta is sleeping.”

He started walking toward me, his smiling black eyes making me smile. “Good, I am hungry,” he said. What are you making?”

“Chicken with rice, your favorite. Do you want to help me?”

Nodding, Cyrus turned and ran out of the kitchen, returning a moment later carrying his toys—red, gold, black, and blue Matchbox cars. While he played with them, he told me stories from day care. I tried to listen and interact with him while making food.

I washed the white basmati rice and put it on the stove. Then I started to fry the chicken, stirring herbs and spices such as turmeric, saffron, salt, and pepper into the pan. The aroma of the spices and olive oil made Cyrus impatient.

“I am so hungry, Mom.” His little hands rubbed his stomach, but he kept smiling. “I am really hungry! When can I eat?”

“Soon, honey. We have to wait for Grandma, Uncle Soheil, and Uncle Seamak to come home before we eat. Do you want some milk and cookies?”

Cyrus agreed to a snack and went back to playing with his cars, moving them back and forth and in a circle, talking to them. I was trying to listen to him, but his voice would fade at times as I was trying to make sense of my dream. The image of the dead man haunted me.

Could he really have been Hameed? I thought. Oh God, is he okay? I wished I could pick up the phone and call him. I missed him so much—his touch, the sound of his laughter, the way he used to play with Cyrus like he too was a kid. Tears filled my eyes, but I wiped them with my sleeve; I refused to cry in front of Cyrus.

Hameed had fled Iran three years before to set up a new and better life in America for our children and me. We talked on the phone only once a month. It was very expensive, and I couldn’t afford it, even though I was working six days a week. He was living with his sister in America, working part-time and going to school, barely making enough money to survive.

I heard Cyrus again, asking questions. “Mom, did you hear me?” He pulled my skirt with his little hand, trying to get my attention. “Mom, why don’t you answer me?”

“I am sorry, honey. I heard you. I am listening to you and trying to get the food ready. Tell me the story. What happened after that?”

My mom and brothers came home later that evening, and we ate dinner. Although I couldn’t get the awful image of the dead man who looked too much like my husband out of my head, I decided not to discuss that with anyone.

My mom looked at him and said, “Your Uncle Soson and Aunt Seema and Ali went to Rasht to see the new baby. Aunt Seema’s sister has a new baby girl. Do you remember? They are there to visit.”

Cyrus and I spoke at the same time.

“When are they coming back? I want to play with Ali,” he said, missing his three-year-old cousin.

“I didn’t know he went there. I just talked to him yesterday, and he didn’t tell me he was going there.” I said. A knot of anxiety started to grow in my stomach. “He promised me he was going to go get his passport ready to take us to Turkey.”

My brother was planning to take us to the American Embassy in Turkey, so my children and I could get visas to go to America. A year and a half year younger than I, he assumed the role of protector while Hameed was in America. He had always been very thoughtful, taking care of everyone—not just my kids and me. He even called my mom every day, making sure she was okay.

My mom answered Cyrus first. “Well, Ali and Aunt Seema are planning to stay there longer, but Uncle Soson was planning to come back this morning.” She turned to me and said, “I don’t know why he didn’t tell you—maybe he forgot. He is really busy with work, I guess. He has to make sure everything is ready before Seema has their baby.” Mom paused, and a curious look crossed her face. “He didn’t call me today.”

“Maybe he was too busy with work and travel…

The inspiring story of an Iranian woman who experienced many challenges living in Iran. She lost her father to a sudden heart attack at age thirteen. She was a victim of the Iranian government brutality; she was captured, tortured and beat into a coma at the age of nineteen. She experienced eight years of war and the death of her younger brother in a sudden car accident two months prior to leaving Iran. When she arrived in America, her marriage of ten years suddenly and unexpectedly fell apart. She was left alone with two young children, no money, no family or friends, and didn't even speak English.

Although Soodabeh managed to go back to school again to become a registered nurse in America, she never felt content. To alleviate the emotional and physical pain, she devoted her time and energy searching for answers and found peace and comfort by connecting with the angelic realm.

Her journey of healing and working with the angels started when she had a vision of her brother's death the day he suddenly died. Although she didn't understand the vision at first, she soon realized that it was the beginning of a fulfilling journey. She discovered her gift, mission, and soul's purpose as a spiritual coach and healer.

Soodabeh began to use the healing power of the angels to help her patients overcome their health issues. In this book, Soodabeh shares her heart-warming stories of faith, courage, and healing from her personal life and nursing career. The stories of healing with angels.

Soodabeh Mokry is a RN, Certified Hypnotherapist, and Certified Angle Intuitive Practitioner. She has been working as a nurse for over 30 years. Soodabeh moved to America from Iran 25 years ago. She is currently helping her clients in her private practice, Emerge Hypnosis, using energy healing, aromatherapy, angelic healing, and hypnotherapy.