by JM Ashwell, Illustrated by Kamela B. Portuges & With Katherine Hartvickson 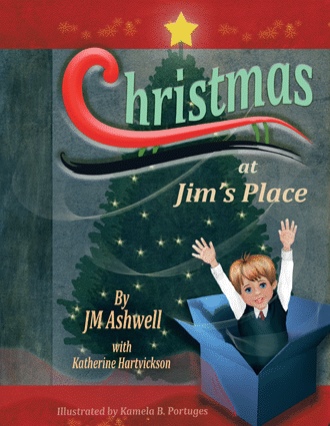 [2:02:34 PM] judymaysmith: In a world that seems to be tired and disillusioned …. Christmas at Jim’s Place shows that miracles and imagination are always out there looking for an opportunity to create new directions and new ways to connect. [2:02:51 PM] judymaysmith: It’s time to infuse a new generation with an appetite for adventure, ambition, acceptance, kindness. So often we speak of how each person can make a difference. Now it's time to build on the power of community and the genius of collaboration and excitement. [2:06:14 PM] judymaysmith: Jim put his hand on the door and hesitated. He was so excited that he could hardly breathe. Yesterday it had looked perfect. He could hardly imagine that it could get any finer. “Go inside,” Kelvin urged him gently, and Jim pushed the handle down and stepped into the room. For about five minutes, he didn’t say a word. In fact he held his breath so long that Uncle Joe had to remind him to breathe out or he might have forgotten to do so. “It’s beautiful,” he said quietly. “Just beautiful. It’s magic, Kelvin, that’s what it is. I guess I’m the luckiest kid in New York City right now.” He didn’t see the handkerchiefs behind him as he walked up and down the huge room touching things very softly, turning around and around to make sure he saw everything. Nor did he see the tear made its way down Ma’s cheek, as he folded his hands gratefully, his mouth round with surprise, his eyes twinkling with joy. “Where is Mrs. Hanover now?” Miss Turner asked carefully. Uncle Joe glanced around to make sure that Jim was not close by and lowered his voice so that the guests at the table had to listen carefully to hear what he was saying. His face was tight and pale and within seconds, soft gasps and pale faces mirrored the unhappy look on his own. He cautioned them to be quiet and not draw attention to themselves and for once he was in charge instead of them. It was not a position he enjoyed given the circumstances, and the look on his face attracted Ma’s attention. She hurried over to see if there was a problem that needed fixing. She was in time to hear the last bit of the conversation and bite down hard on her lip, as Uncle Joe stuttered to an unhappy stop. [2:06:55 PM] judymaysmith: Excerpt “A few years ago,” Ogilvy continued, “New York discovered that it could survive a disaster. When the twin towers were destroyed, many of us lost friends and family, but we learned kindness and sharing and how to pull together. Jim’s mother was in that building.” Parents leaned forward, listening intently. This was something that had affected them all, one way or another. Mr. Olanthus stopped as the children swung round and looked towards the back of the room.

A modern Christmas classic, this story is designed to bring the warmth back into our homes, connect us as families, establish new traditions and celebrate a country famous for it’s heart, imagination and innovation. It also celebrates the human spirit and shows how the best in us will always find a way to shine through. Opportunity is all around us if we are simply willing to look at the world with an open heart and a belief that everything is possible. This story shows what happens when a small boy makes a wish that turns those around him into everyday heroes and brings a community together in an unexpected way. In a world that seems to be tired and disillusioned …. Christmas at Jim’s Place shows that miracles and imagination are always out there looking for an opportunity to create new directions and new ways to manifest. It’s time to infuse a new generation with an appetite for adventure, ambition, acceptance, kindness. So often we speak of how each person can make a difference. Now it’s time to build on the power of community and the genius of collaboration and excitement.

A published author of two action thrillers, a short story in Highlights magazine, and an award-winning poet, Judy is following her heart and writing a book for children of all ages. Judy writes under the pen name of JM Ashwell. As a global leadership coach and motivational speaker, Judy’s passion is for changing the world by inspiring the best to emerge in each of us. Originally from South Africa, she resides in East Texas and she considers the world her home.