Who Said No One Has Ever Come Back To Tell Us?

Evidence From The Other Side 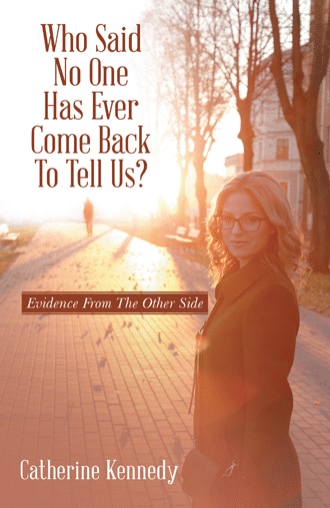 You hear it all the time – ‘No one’s ever come back to tell us.’ You know what? This is simply not true. There’s a wealth of evidence out there in the world, and if you go looking for it, you’ll find it. In this book I describe my experience of people communicating with me from the other side. I also record some of my husband Antonio’s communications from ‘deceased’ friends of his. Most of these friends I knew personally. Others I ‘met’ for the first time when they communicated with Antonio by means of automatic writing.

Our experience over many years has convinced us that life really does continue on the other side. That death is not the end is something we have proved to our own satisfaction. In this we are not unique, so I have woven into our own story the similar experiences of others known to us. I also tell of well-known people whose stories are recorded in print. Especially when viewed in isolation from one another, accounts of communications from the other side are frequently dismissed as implausible hearsay. But considered as a whole, they constitute a substantial and growing body of evidence that cannot simply be ignored or explained away.

We know there are people who scoff at any suggestion that there is life after death. ‘When you’re dead, you’re dead,’ is their often scathing remark. Frequently you find that people who hold such views have never properly investigated the wealth of evidence that is out there. So I say to them, in the words of one of my favourite quotations: “There is a principle which is a bar against all information, which is proof against all arguments, and which cannot fail to keep a person in everlasting ignorance – that principle is contempt prior to investigation.” No one knows for sure who first wrote this, but it’s a principle that all of us would do well to take on board.

It all began over thirty years ago. I don’t know what made me pick up a pen and ask if there was anyone there who wished to communicate with me, but I had already had a few spiritual experiences, and perhaps this is what prompted me. At this time I was practicing spiritual healing, and was accustomed to feeling heat, energy and tingling sensations in my hands. It was a kind of ‘knowing’ that led me to pick up the pen. Immediately it started moving without any conscious decision on my part, forming quite big letters all joined together. Before long ‘I’ had written out four pages. I didn’t understand a word of what I had received, but felt that an external and intelligent force had taken control of the pen. I was holding the pen, but something - or someone - was doing the writing. I could feel the pen being taken over by an invisible hand.

Later on when Antonio came home I told him about the writing. ‘What a lot of nonsense!’ he responded. ‘How can you believe such things?’ I asked him to take a look at the writing, and amazement spread over his face. He sat down, still looking at the pages of writing, and began to draw vertical lines to mark where one word ran into another. ‘I’ had seemingly written four pages of fluent Italian, and in the dialect of a village not far from his own home in Tuscany! To this day I can’t write in fluent Italian. The spirit entity (for that is what we realised we had) signed his name as Ivo Franchi. Ivo was an Italian friend of Antonio’s who had passed over some years previously. Having established that it was Ivo, I then persuaded Antonio to take up the pen. Lo and behold, the pen began to move, and he could feel the same sensations as I had. Again it was his friend Ivo.

Ivo continued to communicate with us for many years, and brought us a lot of evidence that proved to us, beyond any shadow of doubt, that life goes on after our physical death. I was told by a medium when I was young that in looking for evidence of the afterlife I wanted jam on it. “And you know what?” she added. “Jam is what you’ll get!” This has certainly been true for me where evidence from the spirit world is concerned.

As well as having the ability to do automatic writing, I am also a spiritual healer. These two abilities – the ‘jam on it’ that the medium had predicted - have together supplied me with irrefutable evidence that there is another dimension to which we all go when we leave this earthly body, and from which those who have gone before us are able to communicate with us. Their main purpose is to reassure us that they are not dead and that there really is an afterlife. Their motivation for communicating with us is love.

Catherine Kennedy writes with candor and humor about her and her husband’s experiences over the years communicating with the spirit world in English and Italian through the medium of automatic writing—the process by which either Catherine or her husband holds a pen poised over paper and waits for spirit persons to take over and begin writing.

She describes how she and her friends have often been amazed at the way in which people in spirit let their presence be known, bringing evidence for life after death.

Sometimes it’s relatives who come through, and on other occasions friends or the relatives of friends.

Catherine offers convincing evidence that life continues on the other side and that we do not die.

Anyone with a fear of death or grieving over a loved one will find inspiration, hope, and comfort within these pages.

Catherine Kennedy is an experienced spiritual and trance healer. Here she describes how she and her husband, Antonio, talk with the spirit world through the medium of automatic writing. She was born in the West of Scotland, and along with their daughter, they now live in Fife near St. Andrews.