On the Wings of a Dove 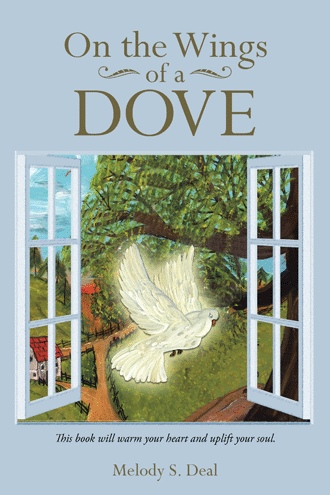 “Ma, Ma, come quick,” Josh screamed as he burst through the kitchen door. The nine year old, near exhaustion after running in the stifling heat collapsed to his knees gasping for air. The freckles that usually populated the boy’s face were lost in a mask of red flush. Sarah dipped the corner hem of her long apron in the bucket of water on the dry sink and began to bathe her son’s face. “Calm down. Take a deep breath and tell me what’s happened.” “It’s Pa. He’s taken sick or somethin’. He fell off the hay wagon and he’s just layin’ there in the field a mumblin’. Abe sent me to fetch you.” “Which field?” “The one farthest over, next to Thompson’s pond.” Sarah grabbed a wooden apple crate that she kept by the kitchen cupboard and ran out on the back porch. “Zeke, come climb up on this apple crate and start ringing the dinner bell. Don’t stop until Josh takes over.” Zeke was digging in his dirt pile under the shade of their large maple tree. “That don’t make no sense, Ma. It ain’t supper time.” “Now Ezekiel, now!” Zeke knew that when his ma called him Ezekiel he’d best be fast to respond. He dropped his shovel and ran. After climbing atop the wooden crate he grabbed the rope and started pulling. The hearing of a dinner bell at any hour other than customary meal times equaled the sounding of an alarm in the rural community. Although the details weren’t specific, the message was clear. Come quick, help is needed. Sarah hoped her neighbors would hear the frantic mid-afternoon ringing and respond. Sarah grabbed her sun bonnet. What do I need to take? Water! She snatched up the bucket of drinking water and sprinted out the door. Before Sarah took off she dispensed orders to Josh. “Stick your head under the pump and cool off. Take turns with Zeke ringing that bell until help comes. Tend to your baby sister when she wakes up from her nap and stay out of the sun.” With their team of horses out in the hayfield, Sarah had no choice but to cover the distance on foot. When the water started to slosh out of the bucket she was forced to slow her pace. Her apron and long skirt kept getting tangled between her legs. She stopped long enough to gather up her skirt and petticoat and tucked them in her waistband. Sweat soaked Sarah’s hair and streams of wetness ran down her back. She stumbled frequently on clods of earth and crop stubble lying in the field. Lashes of fear whipped painfully at her heart. She’d told Henry when he and the boys came in for dinner at noon that it had grown too hot for them continue field work. She’d pleaded with her husband to do chores around the barn and leave the hay until the next morning when it would be cooler. In her mind she replayed the scene that had taken place. The children were gathered at the table and she was standing at the sink. Henry, with his long legs on a six foot two frame had crossed the distance between the table and her in one stride. He’d wrapped his arms around her waist, nuzzled her neck and said, “It’s the last field of hay. I want to go to bed tonight knowing that I have all of it cut. We’ll be careful and rest if we get too hot. I promise to save myself plenty of energy to sashay you around the dance floor at the social tonight.” With a throaty voice, he’d whispered in her ear. “I’d better get out of here while I still can.” Sarah had felt her own yearning, leaned back and whispered. “Yes, you’d better go. Some of our children are getting old enough to catch on to these shenanigans.” “I’m goin’ with you, Pa,” Luke had said with his mouth still full of food. “Tommy Wilson helps his Pa and he ain’t even as big as me. I’ve never got to go and I just heard you tell Ma this is the last field. I won’t get me another chance to cut hay this summer.” In an attempt to intercede, Sarah said, “Henry, he’s only seven and I think he’s too young to be working in the hayfield. Especially today with it being so hot and humid.” “Sarah, I understand your concern,” Henry had responded. “I did say he could help and a promise is a promise. Luke, roll down your shirt sleeves and grab your straw hat.” Henry had motioned to Abe his eleven-year-old and Josh his nine-year-old to come stand beside him and Luke. “Boys, let’s show your Ma that we Whitcomes are tough.” Sarah giggled as her handsome husband and stair-step boys flexed their muscles and collectively gave a low growl, “Gerrrr.” “What about me, Pa? I’m gettin’ big,” Four-year-old Zeke had cried out as he jumped off his chair. Scooping him up in his arms Henry had said, “Now if you was to go, who’s gonna dig up that ground out yonder under the maple tree? You stay here and get that done and next year we’ll talk about you helpin’ with the hay. Besides, we need someone to stay back and protect these women.” He’d put the boy down then leaned over the high chair and kissed his thirteen month old daughter. “Hathaway, how about you take a long nap today. I don’t want your ma all wore out tonight.” After winking at Sarah he’d left for the field, his boys in tow, scurrying to keep up with his long strides. 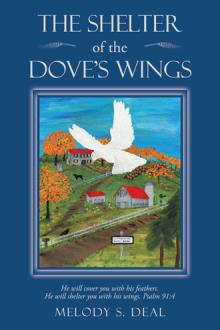 At the turn of the 20th century, Sarah Whitcome, a wife and young mother of five, is happy and content in her rural Indiana farming community. A catastrophic event thrusts her into the role of head of the household. Butting heads with social convention for a woman in 1903, Sarah faces the daunting task of maintaining their farm while finding a way to eke out a living for her family. With grit and leaning heavily on God’s grace and guidance, she puts on her full armor of faith and plows into the challenge. Sarah’s wit, wisdom and unwavering trust in her Creator make a compelling story. Read “On the Wings of a Dove” and be introduced to the Whitcomes: Sarah, her husband Henry, and their children, Abe, Luke, Josh, Zeke and Hathaway. This family’s diverse and distinctive personalities mold them into characters that jump to life from the page and steal your affections. Sprinkle in extended family, long-time friends, foes and a hired hand with a sketchy past, and you’ve got a story that will warm your heart and uplift your soul.

Melody S. Deal was raised in a quintessential, tight-knit Indiana farming community immersed in old-time religion and blessed with family, friends, and an abundance of back-fence neighbors. She draws from her memories, steeped in colloquialisms, to add flavor to her writing. Melody now lives in Camarillo, California, with her husband, Robert.