Take the Leap: What It Really Means to Be Psychic

by Michelle A. Beltran 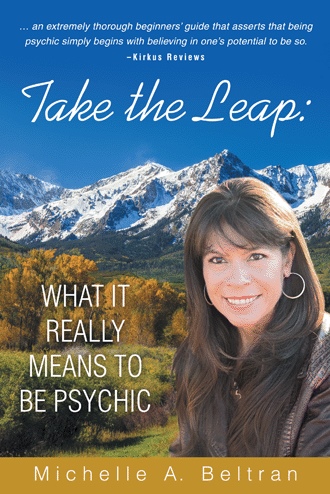 Take the Leap: What It Really Means to be Psychic The steps we take on life’s journey are fraught with ups and downs, misconceptions and falsehoods, unexpected realizations and unprecedented understandings. Life is learning. Even our ability to observe first-hand events correctly is impacted by the inability of our brains to record more than five specific facts at one time. The other facts—rightly or wrongly remembered—are filtered out of our recollection. Our observations are also influenced by our worldview and past influences, not the actual facts. The realm of the psychic and otherworldly happenings, like our observations, can’t be definitively defined. But in spite of that, the world of psychic phenomenon has thousands of followers, and the people who believe in an active unseen world practice its teachings.

What we do know about this area of life is that such belief structures are a part of our culture. The world of active spirituality, of psychic seeing, mediumship, and other psychic modalities is growing. There are just as many people interested in religious principles and inspirations as there are those interested in the mysterious realm of the supernatural. In the past, people thought something was wrong with anyone who thought about psychic or spiritual matters. Now, people are curious. They are in the midst of reconsidering any information they’ve learned about the universe and the world of the unseen. There is a new wave of investigation of such things as intuition, hunches, instinct, unusual awareness, and the possibility of a sixth sense.

Malcolm Gladwell, in his book, Blink: The Power of Thinking Without Thinking, takes a long hard look at the power and presence of the seldom-understood phenomenon we call intuition. We can’t conclusively explain intuition but researchers like Malcolm Gladwell have taken a stab at it. He presents an argument suggesting that our mental processes work quickly and automatically using an overabundance of information acquired over a lifetime. He puts forth a theory that expert judgment and instantaneous decisions are often accurate without the benefit of extensive knowledge. He also looks into the factors that prevent us from using our intuition knowingly and investigates the influences that appear to destroy this mechanism of human intuition.

Others also believe that intuition is the result of a lifetime of experiences; an exposure to information that resides in our subconscious until the accumulation of that information can be used. These people believe that our minds have the ability to archive all types of information we don’t log in on a conscious level. They believe we pick up information subconsciously, while never really comprehending it—body language, tone of voice, a particular look, or something out of place—and this is the root of intuition. However, to others, intuition is a knowing or sensing that comes from within because we are a part of a universal mind—and that it comes without the benefit of rational explanation. They believe that intuition is an unnamed something that operates beneath our layers of logic; something that works with both our conscious and unconscious minds communicating in unexpected ways—an unconscious reasoning that propels us to do things without telling us why or how. Steve Jobs called intuition, “more powerful than intellect.” Intuition, for both camps, is the sum total of our intellectual ability, acquired knowledge, past experiences, sensory perceptions; but for some, it also includes psychic input. Whatever intuition is, it is not instinct. Instinct is an internally driven, fixed pattern of behavior that is exhibited in animals in response to a specific stimulus. It is an inborn impulse—a motivation to action. Salmon swim upstream and fight strong river currents in response to a compulsion to return to their birthplace and spawn a new generation. Salmon do this in response to instinct, not intuition. Intuition is an experience unique to humans.

Intuition not only uses our mental senses to inform us, it also uses our bodies to send us unique messages. You may have heard it said, “He makes the hairs on the back of my neck stand up.” That is intuition using your physical body to signal that something may be wrong or needs your attention. It may be telling you the person or situation in question is unsafe. Intuition may be a tingle, a feeling in your stomach, or an unsettling emotion. It is intuition sending you a message.

To people like Gladwell, intuition and foreknowledge is scientific in nature. To those who believe in otherworldly existences, it is spiritual. While it may seem incompatible to forge a link between the common everyday experiences of intuition, and the trained and developed powers of a psychic, psychics tell us that intuition is the foundation upon which psychic abilities are built. Regardless of where the truth lies on this issue, our culture actively encourages us to rely on rational judgment as the only true expression of reality. We know however that pure rational assessments aren’t always accurate. We have all experienced instances where emotional input has aided in the discovery of a truth, or the reality of an event or situation. The truth of the matter is that our intuition is a worthwhile guide for evaluating situations and informing decisions. It has the ability to take us to unexpected destinations without the benefit of logic. If you have ever had a gut feeling that turned out to be true, or had a sudden impulse to do or not do something, but later discovered you should have listened, you were using the intuitive insights with which we are all endowed.

Given the fact that intuition lives in the realm of the unexplained, we may be able to conclude, in a broad sense, that you already have the foundation for acquiring psychic abilities. We were all born with a tendency toward a psychic mind whether we know it or not, or believe it or not. Psychic abilities are an integral and important part—albeit a small part—of intuition. It is quite possible for any individual to make the conscious decision to develop, rekindle, or magnify the powers of their intuitive voice—their psychic mind. This book is written to discuss what it means to be psychic. The path to the supernatural world of the psychic begins by expanding and fine-tuning intuition, and then paying close attention to both the seen and unseen world that surrounds us. Wayne Dwyer, like many in his field, believes that the current scientific investigation around the mysteries of matter and energy prove that it is quite possible that there is more beyond what our logical minds can consider. For many, religion is the answer to universal truth and a connection with supreme intelligence. Current statistics report that a majority of Americans believe angels and demons are active in world. Eighty percent believe that miracles happen and ninety-two percent believe in God. To others, cultivating and establishing psychic abilities will aid in a search for the power of a universal mind and the universal spirit that unifies us all.

The acquisition of psychic abilities is not just simply the pursuit of a psychic mind. It is more about embarking on a journey of self-discovery that awakens an innate desire to understand the universe and the unseen world we live in. It is not a question of being more intuitive than anyone else and it is not a question of being endowed with more psychic abilities than anyone else. It is only about you, and whether you want to engage in an exploration of the spirit realm or acquire psychic abilities by becoming familiar with the practices of the psychic world.

“An introductory guidebook for aspiring psychics … Beltran gives plenty of empowering advice, in the style of a self-help guide, on the benefits of tapping one’s full potential through the power of intuition …” — Kirkus Reviews

“Michelle’s book should be a must-read for all students beginning the spiritual path.” — Dr. Angela Thompson Smith, Ph.D.

“… Her grounded, systematic approach teaches us how to consciously develop, train and master our individual psychic mind. Consequently Take The Leap serves as both a training course in personal exploration and an insightful map for understanding the world of psychics and mediums. Highly recommended for people who get readings or those who want to give them!” — Bob Olson, author of Answers about the Afterlife: A Private Investigator’s 15-Year Research Unlocks the Mysteries of Life after Death

It is possible for anyone to make the conscious decision to develop, rekindle, or magnify the powers of their intuitive voice—their psychic mind. This book is written to discuss what it means to be psychic. The path to the supernatural world of the psychic begins by expanding and fine-tuning intuition, then paying close attention to both the seen and unseen world that surrounds us.

Our minds are not simply an appendage of our bodies like arms or legs. The mind is a powerful tool from which we can access universal truths and expand our understanding of our inner selves.

If you find yourself moved by a strong suspicion that there is more to life than what can be seen or easily explained, then this book is for you. If you find yourself with an overwhelming desire to explore what lies outside the realm of physical science or earthly understanding, this book will inform you. If you want to know what abilities function outside the domain of natural laws, this book will enlighten you.

Michelle A. Beltran is a psychic medium, author, and intuitive life coach. She has become a leading international authority in the spirituality arena, specializing in psychic functioning, spiritual counseling, and mediumship. She is the owner of Readings with Michelle, LLC. Michelle has studied under internationally known instructors at the nation’s top psychic training schools. She has used her gift of intuition and insight to help everyday people, entrepreneurs, thought leaders, therapists, professional athletes, CEOs, students, doctors, lawyers, celebrities, housewives, teachers, and others who are seeking to understand life and live it wholeheartedly. She recognizes that all of us seek to perfect our own humanity and to achieve lives that honor the soul.

Her life began in Northern California, where she grew up and attended elementary, high school, and college. She earned a bachelor’s degree in political science and soon after was encouraged by her father to seek a career as a law enforcement officer. While in the United States Air Force, she traveled throughout the United States and Far East and often found herself thrust into situations requiring her to manage things in an alternatively authoritative and tactful manner. As a probation officer working in different social situations, she learned to deal with human problems in a way which demanded new approaches. She came to realize there is more to the human condition than she formerly assumed. This gave her insight and understanding into the needs of different individuals, their personalities, and problems. She came to know that human beings are not only capable of great change, but they also have an infinite capacity for achievement. A former professional cyclist and lifelong fitness enthusiast, Michelle finds much of the clairvoyant information she receives is about nutrition, health, and fitness. She credits her experience of participating in a competitive sport with her gift for medical intuitiveness that she now shares with clients. She marvels at her unforgettable experiences racing abroad with the Giro Italia with Forno d’ Asolo international cycling team, as well as two invitations to the US National Development Team Camp at the Olympic Training Center in Colorado Springs, Colorado.