A Chair For All Seasons 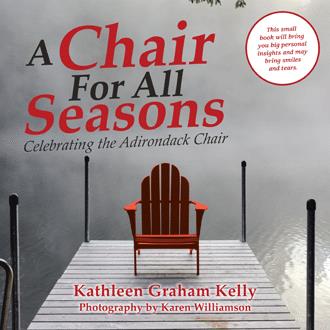 Introduction Perhaps something like this has happened to you. After I leased a red Honda CRV I began to see the same car everywhere. I never noticed so many red Hondas before, and then I began to see red cars of every make and model. Were they always on the road and I just didn’t pay attention? This noticing happened to me about Adirondack chairs. They were always in the background where I grew up in upstate New York, but once I started paying attention, they were everywhere. I started collecting examples of the image of the Adirondack chair used as a logo or sign. My collection grew to include calendars, posters, stationary, a silver pendant and earrings, playing cards, a dish towel, a fabric bag with the image of a chair embroidered in white thread. I began to notice huge, Volkswagen Beetle sized Adirondack chairs as roadside advertisements for truck stops. Rows of chairs would appear advertising a woodworking furniture shop, or a campground, or a farmers market with places for people to sit and relax. Then I began to see Adirondack chairs in advertisements for travel, for vacation loans at banks, for restaurants, for lodging, even for flooring installation. I began to wonder what the image of an Adirondack chair represents for people. What does this image evoke that it resonates and is used in so many different ways. I began asking people what the Adirondack chair image means to them and discovered paradoxical answers: solitude and togetherness, silent reflection and celebration. Other responses triggered by the image of this special chair were escape, vacation, renewal, carefree freedom. Almost every person mentioned relaxing in the outdoors, repose and tuning into the natural world. . I began to think of the chair as an iconic image, something that conveys a depth of meaning instantly, something that conveys multiple insights, triggers memories, that hit the brain beyond words. Adirondack Chair..ahhh, peace The seed of an idea for the creation of this book was born, initially inspired by a collection of photographs by Karen Williamson which feature an Adirondack chair or chairs captured in natural settings. My first vision for the book was a series of photographs of the Adirondack Chair set in different seasons. Next I added the connection to seasons of life, which made perfect sense to my academic background in life history and adult development. So the full idea emerged weaving the seasons of life with the climate seasons in the Northeastern US and with the iconic image of an Adirondack chair as the anchoring theme. Of course then I wondered, Is this a real book? It doesn’t have conflict and characters, or a factual body of knowledge. Who would buy such a book? And so the life cycle of this book took the twists and turns of the doubting artist, wondering if the idea is any good. The idea won out because it would not go away.

Reflect on your life’s collection of memories and remember moments of your special family gatherings.

Kathleen Graham Kelly is a life long educator who completed a doctorate in organizational leadership and adult development at Teacher's College, Columbia University. Kathleen in a life coach, offering individual and group coaching and growth retreats for individuals and companies through her business enterprise, Global Next Steps. She is also a lover of the Adirondack Mountains. She lives in Schroon Lake NY in the Adirondacks and Hilton Head Island, SC with her husband. She treasures her two adult children and one grandson.