Calm beyond the Reef of Self-doubts 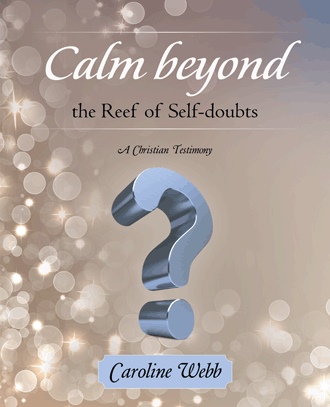 Prelude There was a very sad unhappy woman who carried a myriad of mixed emotions in her heart; they were turning her into a shadow of her real self. Her bitterness, she carried like a banner hoping they were seen, but not herself, the mask on her face was several layers thick for she wanted to hide not her emotions, herself, she didn’t want to see anyone. One day when asked if she would like to go to a Christian Fellowship meeting in a nearby town, her reply was ‘I have nothing to do so, okay’, immediately the words were out of her mouth she felt ill, for fellowship meant people. In due course the day arrived for this outing, and off two women went one happy and talkative, the other resentful and dull. The hall suddenly appeared and both, went inside to be met with happy chatter and smiling faces. The bile coming up into the mouth of the unhappy woman was to say the least very unpleasant; she was hoping it could be removed some way without spewing out of her mouth. She didn’t want the embarrassment of being noticed. Everyone was seated, and the meeting started, there was an air of expectancy, all were looking eagerly at the speaker. This is except the unhappy woman, who had gone into a world of her own bitterness, where no one could reach her or so she thought. While she sat in this room full of smiling women, a feeling of peace started, to enfold her, it was warm and comforting. She was reminiscing on some of the events in her past, paying no attention to the message being delivered in front of her, until the words ‘Here I am’ made her aware of where she was, and the speaker in front. Suddenly the woman came out of her reverie, and almost physically fell to attention, the simplicity of the words ‘Here I am’ had somehow caught her attention and as she started to listen she opened her Bible at the book Samuel 1:3. Someone was calling Samuel, the speaker and the Bible; both say ‘it was God’. The speaker was very confident in her delivery, she believed what she was saying, and as the woman listened a soft calm came over her and she found she believed as well. As she went on this biblical path with Samuel, the peace which surrounded her started a healing from the bitterness, within her heart. The following events were to lead her into a place, where the writing of her testimony was to become the book, you are going to read. The claustrophobia which had been with her as she entered the hall had gone and there was a ready smile on her face for all to see. It was at three in the afternoon on a Saturday afternoon this bitter woman at the Fellowship Meeting, in the presence of God, the Creator of all, became a ‘Born Again’ a Christian Believing Believer, she offered herself to the true one God who calls Himself the “I Am’, to do as He wished in her life. She repented of all her past sins, and the God of Grace removed the roots of each one with one vigorous swipe, then He took the cleansed branch to be grafted into, His vine to do, His will in her life. Her dedication to God, the Heavenly Father, the Creator of all, has never faltered from that day. This woman now is a Believing Believer, she believes in Jesus, and on His word, the ‘Word of the Bible’ PART ONE This story is based on my faith, and written with a renewed mind, a renewed mind, which only comes through the surrendering of self, to the creator of all, our God. I am a Believing Believer, meaning I carry with me at all times the Cross of Jesus, there is no difference to my superficial looks, the renewing is in my heart for it looks at all situations now, in the positive. I have at all times whether asleep or awake, the lover of my soul living within me. I have written this book, with love in my heart under the anointing of God my Heavenly Father. This is not my entire life story, for there are parts I have left out as they are not at all relevant, and are the everyday happenings which we all have, and as each event unravelled there have been lessons, and from these I have had time to ponder, and marvel at the awesomeness of God. There have been many times when, I have just wanted to throw my writing away, but somehow when this happened I would be given strength to look at what was written, and see it all in a new, and brighter light again, and again. Psalm 18:30, God’s timing is perfect, and the Word of the Lord is flawless, He is a shield for all who take refuge in him I learnt as I was writing to believe this scripture with all my heart. God has restored me completely; He has worked through me for His Glory and is now working through me to set captives free. Now is the time I would like to say as Paul says in, 2 Corinthians 4; 7 But we have this treasure in jars of clay to show that this all surpassing power is from God and not from us! God bless each and every one of you. 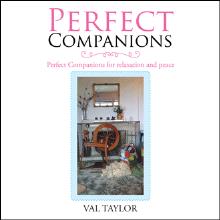 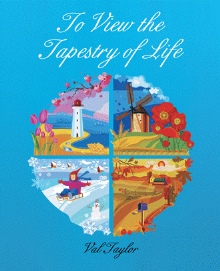 To View the Tapestry of Life
Val Taylor
£5.95 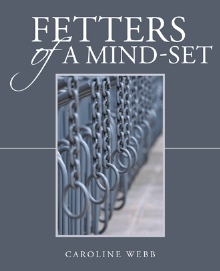 Fetters of a Mind-Set
Caroline Webb
£8.95

This story travels through the life of the author, and many have had or are in a similar crisis, for we all have trials and tribulations, and it is possible to come out of them to walk in victory, this is if there is a change in the focus of self and the situation, to a higher Authority. This story has been written about her life and the learning she had to experience before entering into a very secure safe haven, and then see the world as it really is. It is through this journey the author was to see the Way, the Truth and the Light, which led her to the ultimate, to become a child of the Heavenly Father, the creator of all. Life is but a journey and how we progress along in it depends upon whom, we have abiding in our hearts.

The Author is a gentle person with a gift of far reaching discernment with this and her sense of humour along with the love she has for everybody there is very little chance of not knowing when she is in the midst with you. Her faith is noticeable to everyone and at all times shown and felt when she is up front in church services she takes. You will find her love of God’s creations are displayed in her gardens nothing formal very relaxed and enjoyable, a very dear friend to all.