A DIMDIM IN PARADISE 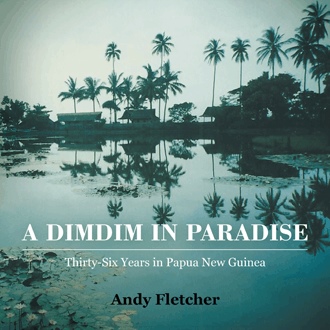 Some Saturday nights when we weren’t working on Sunday were spent at Mataruru Village. Matt and I would bring along an esky with our supplies, which we would load onto a outrigger canoe at the back of the Village, The guys would paddle us through the swamp, which was full of Water Dragons the size of small crocodiles. They would continually drop from the overhanging branches into the water as we approached, scaring the life out of us. Soon we would come out the other side, where there was a sandbar which we would have to drag the canoe over to get to the beach. It was a lovely secluded horseshoe bay with a big sweeping beach lined with Coconut Palms. This was the private beach for the Village and was completely landlocked, it could only be reached via the Swamp so was nearly always deserted. The canoe would be launched into the sea with a petrol pressure lamp tied onto the front of the platform with vines. The Mataruru guys with their home made spears at the ready, would survey the coral reef through the colorful fish filled crystal clear water, just a metre or two below us. Every now and then they would point and dive in, to return with a writhing lobster the size of a small car! Well pretty big anyway. They tried to point out to me the tentacles waving in the water from under the coral ledges that indicated the presence of a lobster, but they were too well camouflaged for my eyes. They insisted that I have a go, but despite them pointing out lobster everywhere I couldn’t see anything, eventually I spotted something. This was my chance to impress I dived in and swam down the couple of metres to the bottom, and with scant regard to my own personal safety I thrust the spear bravely at my fearsome quarry. Fortunately I got it right through the guts first time, I had speared a big black Sea Slug. As I surfaced triumphantly with my trophy, the Mataruru guys were in convulsions on the platform “hahaha Andy kisim Pislama, oooooo pilisss hahaha”. When all the buckets were filled with the catch we would head back to the beach. They were by this time shivering, as they always dived naked, and while the sea temperature was a pleasant thirty degrees Celsius, there was a sea breeze which made it a little chilly out of the water. The guys soon had a large bonfire going and the Kindams (Lobster) were dropped into a drum of boiling seawater to cook for a couple of minutes. We then lounged around on the beach scoffing freshly caught lobster, washed down with cold SP beer, telling tall stories and singing along to the music from the boom box, late into the night. Did it get any better than this? A balmy tropical night where everything was so perfect, at peace with ourselves though we were from different Cultures, we were like blood brothers sharing this wonderful experience. These Village guys had little in the way of monetary wealth but had such a simple though rich fulfilling and happy lifestyle, that I was envious of them.

I went to Papua New Guinea with Mining giant Conzinc Rio Tinto in 1970 to work for a year in their Bougainville Mine, and fell hopelessly in love with the country, and its people. This book follows my journey through the thirty six years I lived in country. Teaching in an Agricultural College, Vocational Training Centres and the Fisheries College. I attended six to six dances deep in the jungle, hid under a table in a tavern that was attacked by warring tribesmen during a tribal fight, helped remove the Apartheid system, and lived for weeks at a time in the Villages of the idyllic Tropical Duke of York Islands

Andy Fletcher was born in Adelaide South Australia on the 8th. February 1947, he was not a good student and ran away from school at the tender age of ten years. He was dragged kicking and screaming back, and completed an Apprenticeship in Automotive Engineering with the only Porsche Agents in Adelaide. He played cricket, and Australia Football, and got a job in the Bougainville Copper Mine Pit Workshop in 1970. He was very active in the local community in Papua New Guinea, where he resided for thirty six years. His family still lives in PNG, but he now resides in the Cairns suburb of Manoora where he has kidney dialysis three times a week.