Being a Christian in Sri Lanka 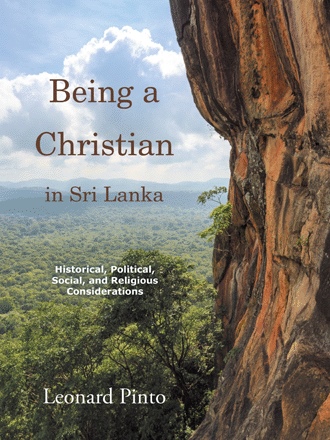 Located below the southern tip of India, Sri Lanka is well known for Ceylon tea, as a tourist destination and recently for cricket. It is a country rich in tropical vegetation, wildlife, sandy beaches and ruins of ancient cities. Known as the ‘pearl of the Indian Ocean’ in local literature, Arab traders called it Serendib, Greeks referred to it as Taprobane and western colonisers named it Ceylon. Sri Lanka was also referred to as Thambapani by the first settlers from India, because of its golden-coloured sea sand and Western writers compared it to the Garden of Eden. The English word ‘serendipity’ was inspired by Sri Lanka, by way of the Arab ‘Serendib’, because of the tranquility of the island’s environment and the occurrence of pleasant surprises.

Today, Sri Lanka is a rapidly developing Asian country with a population of about 20 million, covering an area of about 65,600 km2 (maximum length: 435 km, maximum width: 224 km) and with a Buddhist-Sinhala culture that can be traced back to more than 2,500 years. Christians make 7% of the population and have a shorter history, Catholicism being the predominant Christian denomination. However, its cultural lustre has been tarnished by a civil war between the Sinhalese majority and the Tamil minority that has claimed more than 100,000 lives. In addition, two insurrections by the Sinhalese, in 1971 and 1989, under the leadership of JVP (Janatha Vimukthi Peramuna) have claimed more than 60,000 lives. These conflicts arose from poverty, corruption, unemployment, ethno-religious nationalism, politicisation of institutions, failure in law and order and violent behaviour that was encouraged by opportunistic leftists, racists, religious extremists, nationalists and terrorists for their advantage.

The influence of Buddhism on Sri Lankan society is evident from the numerous large temples (Raja Maha Vihara) and small Bo tree shrines at every major intersection across the country’s rural and urban areas. There is an association of Buddhist temples with Hindu faith, a legacy of times when Buddhist Sinhalese kings married Hindu Indian princesses, engaged Indian States in battle or succumbed to their invasions. Respect for elders and tradition is a cultural trait among Sri Lankans; Buddhist priests are respected even above elders and are considered to be religious leaders with political power. They do not use temples to preach politics, but make eloquent speeches at political rallies, influence trade unions, demonstrate on streets and even enter the parliament. There is no doubt that Buddhist priests in recent years have shown great desire to grab worldly power, apparently to protect the nation and establish a ‘Buddhist-Sinhala’ State. Although Buddhist laity and Buddhist organisations generally support this move, the chief priests of Buddhist Chapters (Mahanayake) initially denounced it as an inordinate attachment to worldly affairs, and therefore contrary to Buddha’s teaching. However, under pressure from Buddhist nationalists and extremists, the heads of Buddhist Chapters adopted a neutral policy on the issue. In spite of justification of monks in the parliament by Deegalle (2004) and others, the move appears to be a backward step, a regression to Medieval Europe (5th-15th century) or a shift to the primitive Sri Lankan society, when State governance was influenced by priests and their religious beliefs.

Sri Lanka was biogeographically linked to India several times during the ice age when the sea level dropped, as evident from fossil records . The pre-historic records of Sri Lanka can be traced back to 300,000 BC or earlier to the period of Homo erectus. Homo sapiens emerged in the world around 143,000 BC and indications of human settlements in Sri Lanka have been found from 125,000 BC (Deraniyagala 1998). The remains of Balangoda man (Homo sapiens balangodensis) a hunter-gatherer, who roamed the Hills of Ratnapura and Horton Plains from about 38,000 BC was found first from Balangoda . Balangoda man seems to have persisted up to about 6,000 BC, taking modern features from about 34,000 BC. The skeletal remains discovered from Batadomba-lena and other caves of Sri Lanka date back to about 30,000 BC. From the skeletal records, the male Balangoda man is about 1.7 m and the female is about 1.6 m in height . According to morphometric measurements the present day Vaddhas are said to be the descendants from this line, the earliest settlers of Sri Lanka. Ancient pre-historic cave figures occur in a number of caves, including those of Thanthirimale and Tharulengala.

After 5000 BC the land connection of Sri Lanka with India was lost. The humans who came to the island thereafter had to travel to Sri Lanka by sea. By this time there was a civilisation flourishing in the Indus Valley, either as a result of Aryan invasion or the creation of Indo-Aryan civilisation by people who lived there from time immemorial. They had a complex social organisation with four castes (varnas) and were engaged in agriculture. By 600 BC iron replaced copper as the metal for tools and weapons, and the iron plough was in usage in agriculture. While the vast majority of them were farmers, a few became traders and travelled from city to city in caravans of bullock carts or sailed down the rivers in vessels buying and selling goods as they travelled. Hence, the merchants sailed down the Indus River to the western coast and along the Ganges River to the eastern coast of India, and thereafter to the open sea. It would not have taken long before the southward cruising mariners discovered a large island at the southern tip of the Indian Peninsula. The arrival of marine merchants from India to Thiriyai in Trincomalee District is agreed by both Sinhalese and Tamil historians, although its religious significance is contested by both . This supports the hypothesis that merchants from India, who came in waves colonised Sri Lanka.

Most people know something about their own religions. That knowledge is usually restricted to what is going on at the present time. When it comes to how their religions developed in their countries, their knowledge is on shakier grounds. As for religion in foreign lands, well, for many, that information is nonexistent.

Author Leonard Pinto’s Being a Christian in Sri Lanka: Historical, Political, Social, and Religious Considerations is a critique based on the observations and experience of a Sri Lankan Christian. Pinto shares the history and importance of religion in his native land. You’ll learn about Portuguese, Dutch, and British rule in the country formerly known as Ceylon, and how each affected religion there. Pinto dispels popular views about how ruling countries dealt with Christianity and other religions, and with those who practiced them. You’ll learn how religion is practiced today from someone who lives it firsthand. Pinto’s book goes beyond the boundaries of Sri Lanka in assessing the problems faced by Christianity from the corrosive effects of the Age of Enlightenment.

In Being a Christian in Sri Lanka: Historical, Political, Social, and Religious Considerations, Pinto comes to the conclusion Sri Lanka would benefit from a Sri Lankan national identity for all its citizens. Hegemony based on ethnicity and religion is dissuaded. You’ll also find Pinto’s conclusions relevant to other countries.

Leonard Pinto, PhD, is an ecologist with teaching and research experience in universities and industry in Australia, the Philippines, and Sri Lanka. He has published papers in international journals and authored Mangroves of Sri Lanka. He also studied theology and writes for newspapers and Internet sites about ethics and social justice.