Pregnancy and Parenthood in a Foreign Land

My Experience in Thailand with Useful Tips for Mothers Everywhere 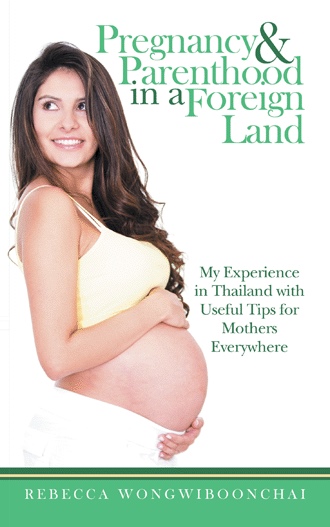 Wow! I was now a mother. We were overjoyed to have our little baby girl with us in the world. It felt great and was such a miracle to be holding my baby in my arms after carrying her for thirty-eight weeks. After feeding Tamina and enjoying our first family time together, she was taken to an enclosed area so that we could all get some rest. She was brought to us again about three hours later for a feeding. We loved having her with us, and it felt strange each time they took her away. Feeding time continued every three hours. It was always my intention to breastfeed; I did not want my baby to have any formula. My breasts were producing milk from the moment my baby was born; however, there was not very much. Due to this small supply and the fact that my baby was a bit jaundiced, the nurses wanted to give her formula to ensure that she did not become dehydrated. After consulting with my husband, I let him feed her some formula and, thankfully, she was not that interested and definitely preferred my breast. In the morning, we were asked where we wanted Tamina to have her Bacillus Calmette–Guérin (BCG) vaccination against tuberculosis: her arm or her bottom. Surprised at her having this vaccination at birth, we chose her arm as that is where we had it when we were teenagers. The first day after her birth included a breast massage, as my breasts were hard and big from the milk coming through, a heated lamp shining on my vagina for fifteen minutes, a lot of cuddles with the baby and my husband, having my temperature and blood pressure checked, and getting some rest. Each time I had a checkup, I was asked if I had a bowel movement. Due to having had an enema and not eating or drinking for twenty-four hours, I had not. Since giving birth the previous day, I was hooked up to a drip that I think was meant to help my sugar levels, but the doctors and nurses were not very clear about what it was and why it was necessary. Thankfully, some of my blood kept going up the tube rather than the liquid going into my body, so they eventually abandoned it and I was free to move around. I was also given some tablets that I was told to take to avoid infection as well as painkillers. While at the hospital, we did not need to change Tamina’s diaper except when they gave us a lesson on how to give your baby a bath and put on a cloth diaper. This was a useful session, but I relied on my husband to do the practical task and remember the steps since I was feeling tired and quite exhausted. On one occasion when Tamina was brought to us, we noticed that her nails had been cut. This made me wonder what else they did with our daughter while she was not with us, but I decided that I needed to trust the nurses and get rest while I could. After all, we would soon have her at home with just us and no nurses. Going to the toilet after giving birth was okay, and the nurses helped me with walking to the bathroom and cleaning myself after. One time when I went to the toilet, something big fell out of my vagina. Unsure of what it was and a bit worried, I asked my husband to call for a nurse. To my relief, nothing was wrong. It was just more of the placenta coming out. Over the next few days, smaller pieces kept coming out. I continued bleeding for about a week after giving birth. I had prepared myself for this with long, thick sanitary pads. Tuesday afternoon came, and it was time for us to get ready to return home now as a family of three. Before taking our baby, we had to pay for the medical care and give the receipt to the baby unit before leaving. We had brought a car seat (Maxi Cosi) and blankets. However, we did not realize that the blankets needed to be washed before use. Thankfully the hospital provided clothing and a blanket for going home. Upon departure, we were given a CD that contained photos of the hospital, us at the birthing class, the birth of Tamina, and Tamina’s first photo shoot, where she was dressed in a frilly outfit. At this time, we were unable to organize Tamina’s birth certificate as we needed to have our passports for identification. On our following visit to the hospital, we presented our identification, and the birth certificate was produced and translated into English for us at a small cost. We were ready to venture out on our own as new parents with our daughter. When we arrived home, we got organized with washing all the baby items, getting formula and bottles at the ready (although we ended up not using them), changing Tamina’s diaper, making a mess of changing her diaper, and getting ready for bed. Bedtime came. I was even more exhausted! Tamina wanted feeding often, so I had only broken sleep. My husband was also feeling tired. This felt like the most challenging night of my life thus far. I reassured myself by saying that it would not always be like this. Well, over the next week or so, I gradually caught up with my lost sleep and started to feel “human” again. Tamina fed regularly about every one to two hours. Her jaundice was improving, and when we went for a checkup on her first Friday in the world, the doctor was happy with her progress.

In Pregnancy and Parenthood in a Foreign Land: My Experience in Thailand with Useful Tips for Mothers Everywhere, Rebecca Wongwiboonchai shares her experiences of her first pregnancy, giving birth, and becoming a new parent in a foreign land. A British expat living with her husband in Thailand, the author gives us an honest and candid glimpse into her adventure from beginning to end. Each chapter is divided into two sections: “A Real-life Experience,” in which she tells the story as it happened for her (including pregnancy, labour and birth, first days of motherhood and breastfeeding, and travelling and working with a newborn) and “The Facts,” where she offers straight talk on practicalities, such as things one might like to consider when making choices, a discussion of food and diet, vaccinations, the importance of personal time, and equipment essentials. Although Wongwiboonchai’s account takes place in Thailand, the descriptions of her firsthand experiences and valuable tips are applicable to expat mothers-to-be worldwide. The author shares the lessons that she learned—oftentimes the hard way—so that you don’t have to.

Rebecca Wongwiboonchai is a mother, teacher, and life coach. In 2011 she moved from living and working in the UK to living an expat life in Thailand, where she soon became pregnant. Alongside parenting and teaching, Rebecca has a successful life-coaching business that coaches mothers in taking action to achieve their goals. She is now living happily in Bangkok with her husband and daughter, enjoying the tropical fruits of nature.