The Blanket is Blue

A story of black market adoption 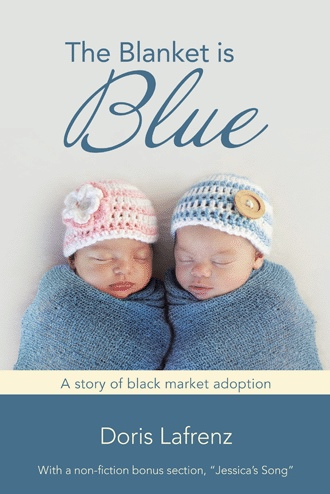 PrologueBlonde Hair and blue eyes
“Robyn, this is not a puppy you’re talking about. You’re talking about a child, a baby!” “I want a baby, Emmett.” Robyn Winslow said hurling the words at him late one night in a drunken stupor. “You’re always working. I never see you! I get lonely.”“If you’re lonely Robyn, find a hobby.”Robyn stamped her foot. “I don’t want a hobby, Emmett! I want a baby!” She stretched out her arm to show him the magazine picture she was holding in her hand. “All my friends have babies and I want one too.” “You want a baby so you can show her off to those shallow Country Club women you hang around with? That’s it, isn’t it Robyn? You want a baby so you can be a mother just like your friends.” “See this ad? Just look at it, Emmett,” She shook the magazine pages in his face.“Robyn, you’re drunk! You’re always drunk. How can you take care of a baby when you can’t even take care of yourself?”“If I had a baby, I would not drink at all. I need a baby, Emmett!” Robyn threw the magazine on the floor at his feet. “I want one!” She turned her back to him and Emmett watched her stagger up the stairs. The sound of the bedroom door slamming shut reverberated through the house. Maybe being responsible for a child is just what Robyn needs. Maybe if she had a child she would stop drinking. He leaned down and picked up the magazine Robyn had tossed so carelessly at his feet. He studied the advertisement. The next day he called the phone number listed in the ad. Two days later Emmett and Robyn sat across in the Dallas law office of George Marshall, the adoption attorney featured in the magazine ad.“We want a newborn,” Robyn Winslow said to the attorney, “a baby girl with blonde hair and blue eyes. Can you help us?” “Indeed I can,” Mr. Marshall said. “Many unwed mothers come to me for help in placing their infants when they cannot provide for the child. I went into adoption law to help these girls find suitable homes for their babies.” (***)The Voice cried out from the dark chasm, “COME!” Deception rose from his place grateful to have been chosen for such an important mission.(***)“What’s your fee?” Emmett asked Mr. Marshall.Robyn rolled her eyes and looked at Emmett. “Must you always reduce everything to dollars and cents?” “How much?” Emmett pressed the lawyer for an answer. George Marshall shifted in his chair. He was uncomfortable with the obvious acrimony between the husband and wife seated in front of him. He sensed trouble ahead, but he was not about to let this couple get away. I intend to close this deal.“As I told you on the phone, my retainer is twenty-five thousand up front, with another twenty-five thousand when I deliver the child to you, and I take only cash.” Emmett Winslow was a business man. He recognized a less than legitimate business deal when he saw one, but he pushed that thought from his mind. “The birth mothers do relinquish their infants voluntarily, don’t they? And we will receive all the necessary adoption papers along with a certificate of health from the child’s pediatrician, is that right?” “That is correct; I deal only with birth mothers who voluntarily relinquish their infants,” Marshall lied. He smiled broadly at Robyn. “I will find the infant you want. I guarantee it.” Emmett Winslow was a skeptical man by nature and he was particularly skeptical about George Marshall but he hesitated for only a brief moment. If this is what it took to satisfy Robyn and to have peace in his home then he would do it. He opened his briefcase, pulled out an envelope and handed it across the desk to Marshall. “When can we expect delivery?”“Goodness, Emmett, this is a baby, not a piece of machinery for your factory!” Robyn shifted in her chair and smiled apologetically to the lawyer.Emmett did not respond to his wife’s taunt. Mr. Marshall dropped the envelope inside his desk drawer. He would count it later. He did not want to appear too eager in front of his clients. Appearance was everything in this business.Emmett said again, “when will the child be delivered to us?” “I will start working on this right away, Mr. Winslow. Your request for a blonde, blue-eyed infant girl may take a little more time than usual, but you should have your infant in a few weeks. Marshall leaned forward on his elbows, looked into Robyn’s face and smiled another one of his award winning smiles, “I will call you the minute that I have the baby that is just right for you. Don’t worry. I’ll be in touch soon. ” Their business concluded, Marshall shook hands with the couple and ushered them out of his office. George Marshall’s Dallas office was located in a downtown office building. He furnished the office plush, conservative and comfortable. He hired a receptionist, a forty’s something motherly type, to run his front office. All these trappings lent an air of legitimacy and permanence to the practice. Mr. Marshall kept offices of this same type in six major cities, New York, Chicago, Denver, Seattle, Dallas and Los Angeles. Each office suite had the same plush furnishings. In fact, George Marshall was not even a lawyer. He was a law school dropout. He didn’t need a law degree to practice the kind of law that best suited him, and people would pay huge amounts of cash for his services.Stealing babies for illegal adoption was a profitable but risky business and Marshall had devised a network of trustworthy operatives. He surrounded himself with business associates who, for a price, knew how to keep their mouths shut and could be trusted to follow orders.

John and Stella joyfully welcome the birth of twins, Baby Boy Smith and Baby Girl Smith. Then the unthinkable happens, Baby Girl Smith is taken and John and Stella are left to grieve for the child that is lost to them. In but an instant, John and Stella are thrust into the deception and heartbreak that is black market adoption.
Emmett Winslow purchases a baby girl for his self-indulgent wife and Jennifer Smith becomes Elizabeth Winslow. Mr. Smith meets Mr. Winslow through their respective business dealings and the two families form a friendship, but no one is prepared for the devastating consequences the truth brings when it is revealed.

The truth of her identity alters everything Elizabeth has thought of as her past. Hurt and confused she runs from the truth searching for an identity that will be hers alone. One day Elizabeth finds love and that love leads her to a place of hope and forgiveness where she can reclaim her past and face her future.
This fast-paced paranormal thriller will have you sitting on the edge of your seat as the darkness of Deception and the light of Hope battle for the souls of two fathers and for the daughter they love more than their own lives.

A transplant from Iowa to California, Doris decided to follow her love of reading, by publishing her first novel in 2008.
In a recent interview Doris stated, “It is my desire that my readers will feel the time they spent reading my novel was time well spent.”