A Kingdom to Buy 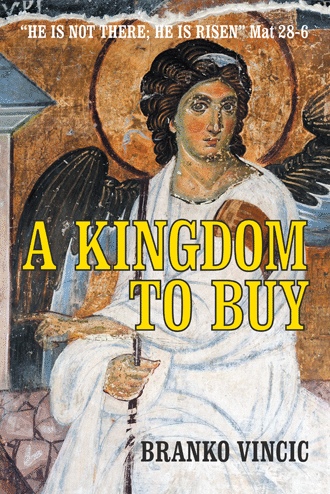 A Kingdom to Buy
By Branko Vincic
Preview
Boro was an unusual child, a day dreamer. In the warm summer nights, he would sometimes lay on the soft meadow grass, gazing at the immense heavenly canopy decorated by twinkling stars and a silvery moon. He was enchanted by its majesty and beauty, dreaming; "Wouldn`t it be wonderful to have wings like birds or angels and fly to heaven, moon, even to the stars."
Tired from this heavenly adventure he would "land "on the meadow and an unpleasant thought would strike him: "Adults say that we are all going to die and will never, ever again, see our house, valley and friends. Why is that? That is not fair."
There was no answer, no way to penetrate this mystery. Luckily, his attention would turn quickly to more joyous and pleasant things in life. That was a blessing of childhood: short memory of complicated, unpleasant things and a resurrected feeling that there would be no end to this wonderful life under the blue canopy of heaven.
Shortly after falling asleep, Boro sensed somebody standing besides his bed. Terrified, he pulled blanket over his head, hoping the apparition would disappear. To his surprise, his fear began melting, as if mysterious visitor sent him a message "Don`t be afraid. I am your friend. Uncover yourself. Look at me."
Hesitatingly, Boro uncovered his head. He saw besides his bed a tall, beautiful young man bathed in bright golden light. His fear was gone. He knew: this was a friend. Caressing Boro`s cheek, the mysterious visitor began talking to him. His pleasing and soothing "voice" entered Boro`s head, echoing in his heart: "Hello Boro, my friend. How are you?"
"Good, and how are you," answered Boro shyly.
"I am always well. You are probably wondering who am I, and why am I visiting you tonight."
"Oh yes, I am wondering."
Beautiful, mysterious visitor sat on his bed. Boro felt some strange divine power flowing from his visitor into him. He felt, happy, relaxed and light as air."
"Boro, I am an angel sent by God to be your guardian angel," declared the visitor. Little boy shouted in amazement "Wow, I have a personal guardian angel. That`s fantastic. How should I call you? What is your name?"
"How would you like to call me?" replied the angel.
Boro thought for few seconds. "Stefan, I will call you Stefan."
"What a beautiful name. I am your protector and guardian angel Stefan. I will see you soon. Bye, bye"
Mighty angel bent down, kissed Boro on the forehead and vanished.

Boro complained to Stefan: " Why do so many bad things happen to me: I chose the wrong profession, failed the exam, and got a terrible stomach ulcer. Why didn`t you, my guardian angel, prevent at least some of these bad things. Don`t you care for me?"
"I am your guardian angel and I care for you. God gave me the job to protect you guide you and guard you, so that you could fulfill the mission, destined to you by God," replied Stefan calmly.
In a sarcastic, angry voice Boro replied:" My mission? Am I going to be some prophet or wonderworker that will save the world? Good prophet material I am. I am a total failure. Please don`t joke with me any more and mention some fancy, glorious mission, some wonderful gift God bestowed on me. I don`t believe in that."
"I understand why you feel so bitter and miserable Boro. Our Heavenly Father uses some ‘sticks and carrots’ to help you in fulfilling your mission," said Stefan emphatically.
"What are you talking about? What are the sticks God applied on me?"
"God`s sticks are the unpleasant things that God allowed to happen to you: Failure at the exam, shame, humiliation, embarrassment, stomach pain. God was giving you the message that the way you acted lately was leading you off the path to your destiny and fulfillment of your God ordained mission."

"Boro, would you like to watch an angelic heaven vision show?"asked Stefan.
"Yes, I would like to watch the show. Where is the screen?"
"Boro, here is angelic production of 'This is your life show.' Watch."
Boro looked. This was not a show. He was right in the heavenly movie. He saw himself being born. He was very happy and comfortable in his mother`s womb. Nice, warm, everything provided for in his small 'world'. He sensed that a mysterious force that placed him in his 'nine months home,' was pushing him out into a new unknown world.
He felt horrified being squeezed through some tight tunnel. It hurt like crazy. As he left his nine months home he was blinded by the shining light and shocked by endless space he came into. He wanted to return to his comfortable little world, but he realized that there was no way back. In his desperation, he protested the only way he could, by crying, after he was hit on the bum by a huge scary looking giant.

Boro looked. His heart stuck in his throat. There was his beloved Jelena undressing, getting out of her old, ravaged, worn out body. An angel like Stefan assisted her to take off her old 'coat.' He used something looking like golden scissors to cut strong ties holding Jelena to her body. When all ties were cut Jelena flew out of her body. The angel gave her a heavenly shower.
Jelena emerged out of the heavenly shower looking like fifty six years ago when she was his new bride: tall, slender shapely girl with long honey color hair. The same beautiful smile, brilliant white teeth, and chocolate brown eyes.
"She is beautiful, isn`t she Boro," exclaimed Stefan. Boro sighed "Oh yes, angelic beauty. I wish I could join her now. Could you arrange that please?
No Boro, It is not yet your time to undress. God has a job for you here on earth. You must finish it."

Boro woke up that late May morning amazed that nothing hurt him. His hips, knees, back, heart, and lungs were perfect. He was able to breathe with full lungs fresh morning air scented with cherries in bloom.

He opened his eyes, got up, warmed his coffee, made himself a grilled cheese sandwich, and opened up newspapers. What more would an old man want: beautiful day, cup of hot coffee, his favourite sandwich and newspapers. And none of these darn pains, aches, check ups, biopsies, tests and pills.

A fly landed on his grilled cheese sandwich. He tried to squash the intruder with his newspaper. He missed. His back hurt, triggering a few other pains and aches to revisit him. He was again just a sickly, old man. He leant towards East, and prayed: ‘Thank you God for this short, wonderful moment of happiness in my old age. Was this a pre taste of Your Heavenly Kingdom? Please Lord; grant me more of these pain free, bright and happy days.’

Will the Lord grant Boro’s prayer before he reaches Journey’s End Valley?

Branko Vincic is a semiretired real estate agent. He co-authored the book Krajina Tragedy of a People, published by Canadian Serbian Council in Hamilton, Canada, 1998. He also published several poems in various magazines in Canada and Europe over the last thirty years. He and his wife have three children and four grandchildren. Branko lives with his wife in Stoney Creek, Ontario, Canada.