Believe in the Supreme Creator 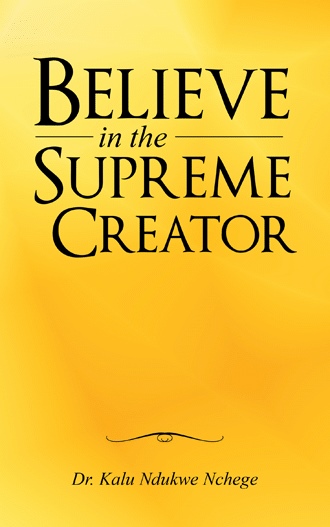 Biasaland consisted of Biasa City, Coal City, Garden City, and Aloma City. Biasa City was the capital. Throughout the year, activities were organized for the entertainment of the people. One such event was the annual dance competition for women. Women in their early twenties competed for the title “Otesu, Lead Dancer.” Each city organized its own training and selected a representative for the final dancing competition.

Dinah Nwachi, (Nwachinemere, “a child favored by God”) took dancing and singing lessons from a retired lead dancer, Gloria Chioma. Gloria had held the title for five consecutive years. She was an acclaimed leader who realized that, when all was said and done, leadership was about people. You hurt when they hurt; you rejoice when they rejoice. People regarded Gloria as a very humble woman, more so than any woman who had lived in the village around.

Dinah had always aspired to be a dancer and felt at peace when dancing. During the dance practices, she discovered that God had put something in her that evoked a desire to excel in her world of dancing and singing. She dreamed she was born to be a winner, a leader. She applied herself and worked very hard every chance she had.

As the final day of the ceremony approached, Gloria said to Dinah, “The Supreme Creator blessed you with beauty and endowed you with the gift of dancing and singing. You have to do your part to develop what is in you.”

Dinah thanked her teacher and promised to live up to expectations and more. She went home that night and prayed for the ability to improve on the gift God had set inside her.

The night before the competition, the minister of the Apostolic Church of Biasa City, Pastor Solomon Emeche, at Dinah’s request, came to the house and prayed for her success. “Let the Almighty God make the final decision. ‘In everything you do, put God first, and he will direct you and crown your efforts with success’” (Prov. 3:6, LEB). The pastor then placed his hand on her head and blessed her.

Early the next day, Gloria came to the house to get her ready. “Dinah, you are poised to show the world that you are a leader. Do not settle for anything less than excellence. Today, you will not only aim at your goal, but you will set a standard that raises the bar for everyone in the Biasa City marketplace.”

Gloria thought from previous experience that one’s enemy could sometimes surface from the woodwork at a time of sure success. She hoped that Dinah’s loving heart would bring her genuine friends to surround her. If you embarked on a lofty dream, some people, including your close friends, would be downright jealous and plan to sabotage it.

As they were preparing, Jesika, Dinah’s high school friend, knocked at the door. After they greeted, Jesika presented Dinah with an expensive wrapper, head tie, and blouse from her mother, Lydia. Jesika offered the clothing as a loan to Dinah to wear during the competition. Dinah happily received them from her. They were a perfect fit.

“Dinah, you look beautiful. God has given you the talent to excel. Shine at the arena,” Gloria said.

The group held hands, and Dinah prayed. “Faithful and loving Father, the Supreme Creator, you put the dancing dream in my heart. Lord, please guide and direct me. Open the right door, and close the wrong one. In Jesus’s name.”

Dinah left the house with confidence and trust in God.

Mr. Kalson Omepuru (“one who comes to the aid of the needy”) had established his own business and was the director of Biasaland Palm Produce Company. Through dedication and faithfulness to God, he had employed workers who carried out palm oil and palm kennel production for the company. They were dedicated workmen. Because of Kalson, the men had been able to financially take care of their families.

But Kalson wanted to do more. So one night, as he always did, he went down on his knees and prayed to God. “Lord, I have achieved an enviable level of success. Thanks to You, I am no longer content with my present level of achievement. My intention is to ascend to new heights. I am asking You, my God, the Supreme Creator, to show me how I can give the priceless seed of help to a genuinely needy human being. Shortly after I went to sleep, I had a dream. I heard a voice that said, ‘Your name is Omepuru. You have asked God to show you how you could live up to your name.’ I woke up and prayed. ‘God direct me. I have faith in You, Supreme Creator and Ruler of the Universe.’

“In the morning, I went to work. As I finished reading the morning devotional scripture, my niece Mercy told me that the Annual Women’s Dance Competition was scheduled to take place at the marketplace that day. I had witnessed the women dance before, so I was not so enthusiastic about going to watch the performance. Mercy insisted on my going and said she thought I would enjoy it. I was just about to leave the office and head to the marketplace when a friend of mine, Jacob Mazi, drove in and asked me to go with him to retrieve his car, which his driver had abandoned on the roadside because of engine malfunction. I told him I would go with him after the dance show. When Jacob saw my reluctance to go immediately, he said, ‘Kalson, it is nothing but women dance, which is not very important.’

“My mind was made up to go and witness the show, and my niece was standing there waiting for me. I decided not to allow Jacob to talk me out of the decision to go. ‘Focus on your dream,’ I said silently. But to appease Jacob, I asked my driver to go with him while I drove to the show. God’s angel was directing my movement. It was not coincidental.”

Believe in the Supreme Creator is a book about hope, trust, and belief in God. It follows the life of Dinah and her relationship with Kalson. They are faced with disappointments, betrayal, and challenges. They learn to submit to God and walk with Him in faith.

Dr. Nchege weaves a story about God and religion using biblical references and African idioms to demonstrate the power of belief and faith.

“This is an inspiring and enjoyable book by my old friend from my Nigeria days, Dr. Kalu Nchege. I am amazed and thrilled by the way he has been able to show that in all circumstances there is a Scriptural admonition or promise, if when trusted in, brings answers and blessings and a resolution to the situation. Here is hope, encouragement, and instruction for any reader who really wants to know the Supreme Creator who is revealed in the Holy Scriptures Father, Son, and Holy Spirit.”

“Through this narrative, Dr. Nchege is able to depict the need for each of us to believe in the Supreme Creator. Only one who has gotten to know how gracious and merciful God is could have delivered a piece of literature like this. Such a remarkable way to let the world know regardless of nationality, ethnic origin, or religious denomination style of worshipping, God loves each of us unconditionally and we must love Him back and be born of the Spirit of God.”

Dr. Kalu Nchege was born in Eastern Nigeria and attended Government College Umuahia. He graduated from Tuskegee Institute where he earned a doctorate in Veterinary Medicine. Married, with four children, he is retired and lives in Atlanta, Georgia. He enjoys reading, gardening and sharing stories with his grandchildren.