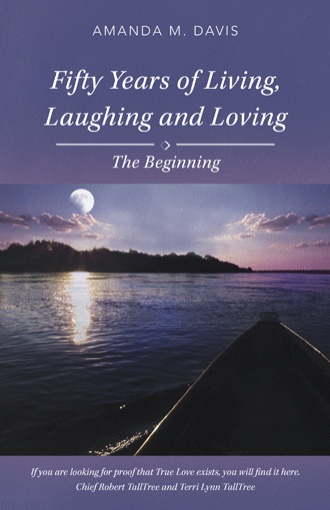 The next time I saw him I was starting a new job the next day, he was already working. He worked days and I would be working evenings including every other weekend. He was having a phone installed. We rarely saw each other and talking on the phone was difficult for me because the phone was in the kitchen, the hub of the household, and my grandmother did not feel she had to leave the room just because I was on the phone. We finally had time off at the same time. We had lunch and he was antsy the whole time. Finally he blurted out “I have a surprise to show you. I am taking you out to my trailer”. Now I had seen it outside before, a tiny little old fashioned one room plywood trailer with rounded ends. The whole thing was fourteen feet long and eight feet wide. He had told me it was all one room inside kitchen & living room, the couch folded down into a bed. Oh yes and no bathroom. Outhouse it was. Many places out in the country still used outhouses so that was no biggie.
As we drove down the road to his place I couldn't believe my eyes” There was the frame of a new building on the front of his tiny trailer. It was bigger than the whole trailer. As we got out of the car he was grinning from ear to ear and asked what do you think? Frankly I was first puzzled and then speechless as he continued on. He took both hands as if making sure I wouldn't bolt. “Amanda I want you in my life, if you'll have me, on any terms you set. I know you have been badly hurt and are not ready to make a binding commitment. I'm patient, I'll wait. Please say yes. I am building this for you so you can be comfortable here until we can get our own place.
To say I was dumbfounded would be an understatement. I didn't even think twice. I shook off his hands and practically jumped into his arms: yes Yes YES!! I didn't get the reaction I expected at all, all he said was “Oh”. He was hugging me tight, almost too tight, but it was as if he was shaking off something at the same time. I finally leaned back and looked at him, asked what is wrong and he burst out laughing and said “ I have been practicing all these arguments to convince you for days and you jumped right by all of them and now I don't know what to say.” “Tell me how you feel right now?” I suggested. He stopped laughing got very serious and very simply said “I love you”. I laughed and cried all at the same time, but when I finally got control enough so I could talk I repeated the words back to him just as seriously.
We never took those words lightly. They were never tossed out lightly but always said with consideration. Fifty years later approximately forty eight hours before he went home for the last time, from the depths of his dementia riddled mind I heard them again. I was sitting beside him, as he sat in his recliner the last time he would leave his bed. He took my hands in the same way looked at me very seriously and simply said “I love you” This time I cried even more and struggled a lot harder to gain control so I could repeat the words back to him once again. That was to be the last meaningful communication we had on this earth.

“I am nothing special, of this I am sure.
I am a common man with common thoughts and I've led a common life.
There are no monuments dedicated to me and my name will soon be forgotten,
but I've loved another with all my heart and soul,
and to me, this has always been enough..”
Nicholas Sparks

He wanted my opinion on windows and door placement in the new room. Oh what fun! We decided on how we would place the furniture first, using buckets and sawhorses so we would know where to put the windows and door. He said “We will have to go furniture shopping”.
“No we don't I have furniture in storage that will fit perfectly in here, everything we need.” Night was drawing in and neither of us wanted to end our time together. I called my grandmother and told her I would see her tomorrow. She said I suspected as much and hung up. I was going against her morals. I knew I was not being promiscuous, just jumping the gun a little. I knew in my heart of hearts we would be man and wife someday when the time was right. We were committed to one another right now. We spent a glorious night of getting to know each other physically and finally slept with bodies touching. That tiny little trailer was plenty big enough.

I’ve written this book to tell you a story of true love, perseverance, and the great satisfaction of living life in the present. I hope you will enjoy our story and learn the timeless lessons that are embedded in the stories. You do not need to look for them, just read the book and enjoy with an open mind.

Amanda has lived the stories you will read between these covers, along with her beloved Donald. The stories are all based in Maine. You won’t find the cities and towns on a Maine map, but you will be able to find most of the lakes and ponds in the northern part of the state, where they met and played. The stories are all true, and you may learn something from them. I did. She still lives in Maine on the shore of the beautiful lake they called home. She has always said “Water soothes my soul.”