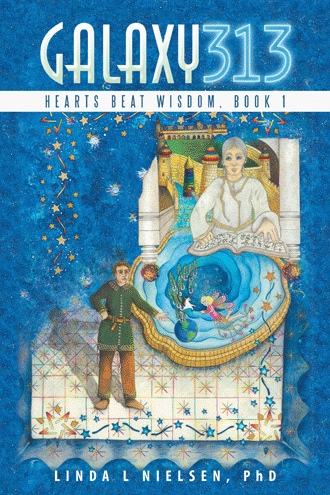 Chapter 12 - Sefron’s Teachings At the other end of the meadow an enormous tunnel of brilliant white light rotated slowly, encircling Niko in a lustrous glow. He stood still, marveling at the mystifying tunnel while basking in its radiance. Sefron sat cross-legged in front of the tunnel. The elf talked while Niko remained entranced with the soothing texture of the light surrounding him, and only half-attentive to Sefron. “This tunnel of light is here to help you understand the nature of things.” Sefron’s voice drifted into Niko’s consciousness. Suddenly aware that he might have missed something important, Sefron now had his full attention. “The nature of things?” Niko questioned. “The nature of the game of life.” “Is this tunnel part of the game?” He studied the tunnel, its light and movement, trying to understand. It didn’t help. “You might say it is the unseen part, the part that is hidden, the part that is unknown.” Sefron nodded approvingly to Niko. “It is a good sign. It does not often make itself available to seekers of knowledge, not even here in the Land of Sefron. I call it the Clear Tunnel.” “It doesn’t look clear to me. I can’t see through it.” Niko put his things down and moved closer to the tunnel. “Things are not always as they appear on the surface,” Sefron replied. “The Clear Tunnel is here for you to enter.” Niko started to step closer to the tunnel, then noticed that Sefron was still sitting down. “Aren’t you going into the tunnel with me?” “I probably will.” Sefron leaned to one side to smell a meadow flower that grew next to where he was sitting. “Probably? What do you mean by that?” “I mean there is a probability that I will enter the Clear Tunnel. Then again, there is a probability that I won’t.” “That’s no answer.” Niko glared at the elf. “It appears to me that you won’t or else you wouldn’t still be sitting.” “It might take you more time to learn than I thought.” He rubbed his hairless chin, which he did when he was considering a situation. “Everything is a probability. Pay attention. Nothing is as it appears,” Sefron responded soberly. “You just told me that,” Niko retorted. “And I thought it necessary to repeat myself,” Sefron’s dark eyes were full of knowing. “I sat down here to relax while I answer all of your questions. You see, I knew you would be true to your form and need to have a period of questions and answers before you will enter the tunnel.” He lightened the moment with a slight smile of amusement. “Where is that adventurous spirit of the hunter Niko of Quintaris?” Sefron’s statement snapped Niko to attention. “I am a hunter,” he replied recalling his training in the forest. His mind had to be clear and focused on hunting, yet he must remain alert to everything around him. Just then he noticed Sefron peering at the sky. Niko looked up to see what had caught his interest. A tiny white bird flew high in the blue sky. Niko watched intently as the bird descended, lower and lower, until it hovered above the Clear Tunnel. As he focused on the bird, images appeared in his mind, hazy at first, like fragments of a dream. All at once, the images tumbled forth stirring his memories. Niko turned to Sefron. “I had a dream about a bird like that.” He spoke quickly while images rapidly flickered through his mind. “It was in a castle, the crystal castle I saw yesterday in today. There was a crystal visioning well and a man in a long white robe.” “That wasn’t a dream, Niko. You were in Galaxy 313 early this morning. I saw you there.” Sefron nodded to the bird, “Good morning, Ra’el.” He held a finger out to the tiny white bird who flew to him chirping a warm greeting. Niko laughed. “You were asleep in the cave this morning, Sefron. You couldn’t have seen me anywhere.” “I sleep in a way you have yet to learn. The man you saw is Three Thirteen.” Sefron introduced Ra’el. “And this is Ra’el from Galaxy 313.” Studying the tiny bird, Niko shook his head, “Ra’el? No. The bird I saw had a different name.” Images continued to overlay his perception of the bird until every detail of Galaxy 313 became clear to him. “There were two white birds! Te’as and Ra’el.” And Niko remembered Annalisa. “Where is Annalisa? I wonder if she remembers. Three Thirteen said she wouldn’t remember, but she has to remember.” Niko spoke his thoughts out loud in an attempt to understand what he was remembering. Sefron listened approvingly as he heard Niko’s recollection of Galaxy 313. “Three Thirteen gave me a pouch of stardust.” Niko retrieved a small pouch from his pocket. It glistened in his hand as he continued to remember. “I wished that I would remember everything Three Thirteen told me. And I have remembered. I remember it all, Sefron!” Ra’el chirped happily and took to flight. She had succeeded in assisting Niko in remembering his journey to Galaxy 313. Sefron nodded and smiled, watching the tiny bird disappear into the depths of the blue sky. Then he turned his attention back to Niko who also watched Ra’el’s departure from the meadow. Sefron spoke in a loud voice that demanded notice, “Now that you have remembered, it is time for you to set out on a new adventure. He swiftly leapt to his feet in a swirling movement just as a lightning flash spiraled into a vortex of energy that zoomed from the tunnel. Niko jumped out of the way. “What’s it doing?” he shouted in alarm. “Do you remember how you traveled to Galaxy 313?” Sefron inquired. Niko hesitated, still examining the out-of-control spiraling light. “I…I traveled on a silver thread,” he managed to answer. “How did you do that?”

Threads of starlight weave life together in a rich saga of multidimensional tales. They are the light between shadows which is where these earth stories have been awaiting their unveiling. That time is now, whatever now in which they happen into your world. Galaxy 313: Book One of the mystical fiction series Hearts Beat Wisdom introduces the principal characters and provides an overview of events thus far. These timeless tales for ages 8 through adult open a path to enlighten the heart and soul of humanity during this time of transformation. The light of love shining within each person must unite as One with Divine Presence to restore balance and harmony to self, the earth, and all life. • Niko of Quintaris—an adventurous young man who breaks with Quintaris tradition in following his heart. • Kuma, Wisdom Keeper and Star Spinner on Galaxy 313—a rare breed of guide and teacher. • Sefron—a light-being from Galaxy 313 who assumes visible forms, primarily as an elf who is Niko’s mentor on earth. • Annalisa—the fairy princess who is given to outbursts of worry about her mission of going to earth to remember who she is. • Humbugs—interdimensional way-showers through frequencies who fill crystals with dream images to assist those on their path of awakening. In the heart of a giant crystal cluster on Galaxy 313’s Brightest Star, nestled the round, furry creature yawning and puffing up in a big Humbug stretch. He could feel a special day stirring deep within himself on Crystal Mountain and beyond. “Look!” he announced in a soft, compelling hum to all who could hear him. “Open your eyes and listen with your heart. Feel beyond disorder’s illusion. Embrace the love that awaits all life.” Also by Linda L. Nielsen, PhD Microtonal Healing: Spirit of the Healing Voice. 2004. Camarillo, CA: DeVorss Publications. Received the 2005 Visionary Award in Alternative Healing.

She can’t recall a time without stories that captivated her imagination. Stories that tickled her heart with characters who took her on journeys filled with love, wonder, magic, and everything in between. They left a lasting impression of delight and happiness continuing beyond childhood to this day, and is reflected in her mystical fiction series Hearts Beat Wisdom. In 1999, she submitted a short piece to a publisher titled “Message of the Rose”. Although it was not accepted for publication she received a thoughtful letter from the Editor. She paid heed to his salutation “Gentle Writer” and the words that followed. He was correct with regard to the road being long, nonetheless Gentle Writer was not discouraged. She loved developing and writing all of her mystical fiction books that had been flowing through her since 1979. She wrote Galaxy 313: Book One between 1979 and 1983. The publishers passed it by. She took a deep breath and continued writing six more books in the series. Galaxy 313 is now a reality, and the subsequent books are in line for final editing. Linda L. Nielsen, Ph.D. is a Social and Cultural Anthropologist, with specialization in an array of vocal healing practices. Her education includes Transpersonal Psychology, certification in Expressive Arts Therapy, and clinical hypnotherapy. All of her studies and writing have focused on spiritual/personal growth, expansion of consciousness, and Oneness with Divine Presence. Her education was accomplished during a ten year period while continuing to write mystical fiction, poetry, and pursuing other art forms. Dr. Nielsen honors the wise woman within as one who cherishes youthful memories seasoned with experience. She has facilitated guided meditations, expressive arts for children and adults, including vibrational healing with light, color, movement and sound. She practices and teaches vocal healing methods to individuals and groups to restore wellbeing in body, mind, emotions, and spirit. Overtone chanting and microtonal singing, as well as her adventures in lucid dreaming and shamanic journeying have transported her to interdimensional realms revealed in her stories. She resides in Oregon, the land of a beautiful blue coastline with powerful standing stones, unpredictable winds, and abundant rain interspersed with brief showers. Graced with the sun’s warmth and vibrant arching rainbows instills balance. Coastal life is where guidance hovers and directs the flow of her creativity. Her channeled stories invite you to experience events, and realms of expanding consciousness, places of awareness the author knows intimately. Taking time out to walk along her favorite beaches at low tide, and hike scenic coastal and mountain trails ignite her stories with environmental attention. Perfect places to nurture the spirit of life while singing to migrating whales, dolphins at play, and an occasional sunbathing otter.