Ageless Wisdom ~vs.~ The Winds of Lunacy 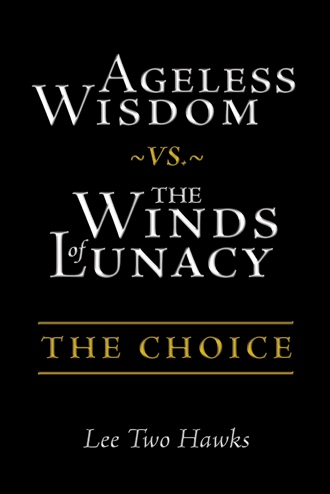 I was a stupid ugly little kid nobody wanted. I was nobody’s child.

I stood alone in the hay field and cried. I didn’t know why. I was alone in a manner which I could not express nor understand. Even with my brother, the bright outgoing kingpin of my stability, I was alone. It was unfathomable. My four year old mind could not formulate this deepness, this void, nor my heart understand this anguish. I felt haggard and aged, tired. As I dropped to the ground, heavy, burdened, sad, weeping, I felt a Presence. Though no one had ever physically hugged me, I knew this Presence was embracing me. Though I did not know the word, I knew this was love. Though I knew only turmoil, I knew this was peace.

I saw her then- this beautiful Indian woman, her long black hair brushing against my child-face, her eyes luminous with grace. I felt her move within me, about me. I felt protection, and beauty, and gratitude. She said, “The cauldron of fire purifies and strengthens. This path you have chosen is difficult, but perfect. You are the seed sheltered in the winter storm.” I had no understanding of what she spoke, but did, for the briefest of moments, know only comfort, calmness, and, yes, strength.

The Life aspect which manifests in all forms- planets, solar systems, suns, humanity, enters and attaches itself in the heart of man, through the sutratma which is not a single cord but an intertwined confluence of life and consciousness, the consciousness attaching itself in the head center.

The blood distributes the force we call Life for regeneration and coordination of the physical form. The brain responds to the consciousness force, activating and controlling the neurological pathways bringing about the awareness of the body to its multiple facets and to the environment through the sensory input. The creative thread (fused with the consciousness thread) is active today in its ability to reframe past-life consciousness into spiritual awareness and overt manasic action. This manasic (mental) action blended with pure intent, desire, and will opens the potential for the eventual building of the rainbow bridge, the antahkarana which will connect from the root chakra up the sushumna to the sutratma and hence to the upper mental plane and through great endeavor on to the Monad. This creates a direct linkage from the physical to the Soul to the Monad. Blessed, indeed, is the one who brings this into manifestation - for the greater Journey has begun.

Death, pain, fear, sorrow, anger, hate-is this truly the lot of the human family? Torture, shame, debilitation, frustration, poverty - is this truly an acceptable premise for us? Greed, despair, inequity, famine, disease - really? Corruption, manipulation, tyranny, tragedy – is this truly our vision, our ideal, our faith? Kill the animals. Kill the air. Kill each other. Kill our children.

“Whaddya got there, buddy?”

“Well, one less to fight. Let’s saddle up”

The 100 degree heat made it hard to breathe. Six months of this, six months to go. The bullet blew by my head. The RPG was a lot closer.

Train yourself to integrate everything that is useless or is in any way undesirable, for one who continues with unpleasant memories creates over and over for himself similar experiences of misery, or pain, or sorrow. The very thing he is trying to free himself from becomes that which continuously assaults.

When integration is complete, using the tools of forgiveness, forbearance, tolerance, patience and understanding, the emotional body (astral form) is peaceful and comfortable with its environment, powerful and impregnable from outer disturbances. The practice becomes the principle bringing strength and courage and fortitude to move forward.

There were five of them coming closer and closer. The explosions and rifle fire were deafening, disorienting. I was out of ammunition. When the five charged, I rushed at them madly swinging my rifle, crazed, bloodied. The bayonet ripped my side and I tumbled, tumbled…. They followed…. (I watched his eyes, as crazed as mine as he plunged the bayonet, oh, so luxuriously into my neck.)

There were five of them coming closer and closer….

There were five of them coming…..

There were five of them….

I’m tired of the nightmares, the scattered remnants of myself dissolving in grief, anger, night after night after…..

One now came closer. I could see him, smell him. I was sweating, angry, but as he charged, I stood, arms at my side. Something in my eyes made him stop. We looked at each other. He dropped his rifle, came closer. We stood toe to toe, and yes, we cried, together, we cried. We embraced. He dissolved. I dissolved. The nightmare ended, forever.

My tongue is heavy with unspoken words, swollen with the passion to express them. Language as symbol can only be a marker for a greater voice, the voice of experience, of insight, of perception. The sounding of words, though moving, exact, seeds the listener with ideation or provocative response.

My tongue is heavy with unspoken words. Words formatted out of vision, understanding, the willingness to listen, to heed. The greatest story, the most sublime wisdom of our age, lies not in the construct of language, but in listening; for there is much given beyond words. This is my experience, this story, with words. Beauty is lessened, its meaning diminished by the simple act of writing or speaking. But at this stage of evolvement, before telepathy and sensible empathy, words are the messenger and the message.

Ageless Wisdom ~ vs.~ The Winds of Lunacy has a number of objectives:

To provide methods, ideas, and tools for constructing a vital, lively, and positive lifestyle.

To assist in becoming knowledgeable about the energies and forces that are in constant movement within all substance, most notably the human.

To define and characterize terms used in everyday language in a more illumined fashion.

To inspire, with personal stories and the walk of “the road less traveled.”

To present a roadway or path to higher consciousness and expansion of awareness.

To provoke and encourage a curiosity into the research of the phenomenon of self.

To remind all who read Ageless Wisdom ~ vs.~ The Winds of Lunacy of their divinity and purpose here on Earth.

To bring into awareness the “as above, so below” connectivity that exists throughout all existence.

To show more effectively the “why.” As we find the why, the “how to” follows, and the lunacy stops.

Within the framework of this text lies a revealing secret. Within this revelation is a design or a manifesto for living a balanced and harmonious life and to enrich the mundane, illuminate the challenge of life, invoke steadfastness, discipline, and the honor of life. Are you ready?

Lee Two Hawks, a spiritual leader, specializes in teaching, lecturing, and healing energies, which traverse into the realm of cosmic laws, expanding consciousness and lighting the way by example. With his by-side Shadow Fox, he created The Sapphire Teachings, empowering, encouraging, and igniting the fire of who we are through self-validation.