by Cathy A. Corn 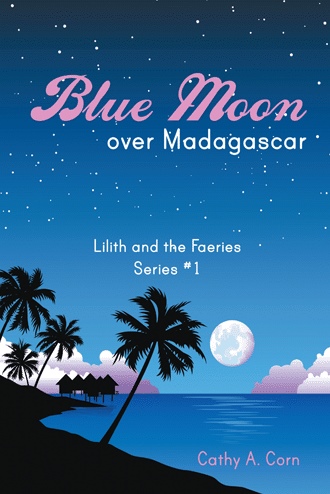 Lilith Devlin first heard shouts and a scream from the rear of the Reed and Grogan Bookstore, saw a man and several small children running up the middle aisle, and then, high above, she spied it.

“Is that another sparrow?” Peter said from the cash register beside her.

“Oh no, more exotic than that,” Lilith said. “See the webbed wings, the pointy ears? The way it flies is different, too--more erratic.”

“A bat?” Peter said, his face flushing beneath his pale, blond hair. “Won’t we all get bat fever? Shouldn’t you be doing something?”

Another employee, Noreen, ran up to the front.

“Hey, boss,” she said to Lilith. “Aren’t we taking advertising for those vampire novels a little too seriously?”

Lilith smiled--for she loved managing this store with these bright, young employees--and said, “Excuse me.”

She strode briskly to just beyond the restrooms in the back. The creature huddled near the ceiling on a large tree--a constructed one painted with Winnie the Pooh and friends. The bat could pass as part of the display if he didn’t take flight again. However, a small knot of concerned citizens on the ground would be hard to convince.

“Hello,” Lilith said to a tall man who might have been attractive without the scowl. She peered upward at the immobile creature and calculated the distance.

“I’d like to talk with the manager. There are public health issues here,” the man said.

“Oh, he looks healthy,” Lilith mumbled under her breath.

“I am the manager, sir. My name’s Lilith Devlin. It’s only an hour until closing. Pest control will take care of this after that.”

“Well, how’d it get in here, anyway? I’ve never seen a bat in a store before. It’s creepy,” he said.

“We have a few books with information about them, if you’d care to browse. They’re highly useful creatures--eat bugs and such--wouldn’t even think of hurting a person. They’d probably be household pets, except they’re nocturnal and only good to play with at night.”

The man’s lip upturned in a tiny rendition of a smile, and his looks improved dramatically. He shook his head and disappeared toward the exit.

Just then, yet another employee, a heavyset boy, appeared from a back room with a broom, waving it with wicked intent. “I’ll kill it. Step aside and I’ll whack it. Look out! I’m gonna get it!”

“Settle down, Chris, and lower your voice. Lower the broom, too. I’ve made arrangements, and someone’s coming to get the bat. If you whack at it, it might find a hiding place we can’t get it out of.” Lilith spoke calmly, fingers crossed behind her back.

“What’s going on with this store? First the sparrow flying around in here last week and now brother bat,” Noreen said, having moseyed back to check out progress.

“I wish I could explain it,” Lilith said, but she knew. Not only had her personal life begun to metamorphose, but the climate here at work was changing.

“Transition,” Peter read from a paperback book with glossy brown cover. “That’s what the bat means.”

“Animal-Speak?” Lilith said without looking. “I love that book. So that’s what this animal sign means.”

When the last customer filed out, Lilith encouraged the other employees to leave, too. “I’ll close up,” she said.

“But what about the pest control people?” Chris asked. “I can stay and guard it until they come.”

“It might be a while. Go ahead and go,” Lilith said, touched by his concern. She stood at the large glass window until the last employee pulled out of the parking lot. She sighed and turned toward the store’s rear, walking back meditatively. A minute later, she emerged from the offices with a heavy pot and a square of cardboard.

“Come down a bit, dear,” she said to the motionless being. She sent telepathic pictures to it, scenes of it moving to a lower perch, scenes of being outside in the dark, winging its way with other bats. As she connected with it, she sensed it was healthy, that it hadn’t ventured indoors because it was diseased.

Just as she toyed with the idea of a ladder, the wild one fluttered through the children’s department and landed hanging from a large, thin display book. His perch placed him within easy reach now.

She covered the misunderstood visitor with the pot and prepared to slip the cardboard beneath its rim to contain him. However, the large book made a perfect covering for her makeshift trap.

Lilith proceeded calmly, carrying the book-covered pot out the rear door of the store. She paused and inhaled the sweetness of the late August evening. Even now, after dark, the air soothed her. She listened inside the pot and heard nothing.

A few street lights illuminated the landscape. Walking up a steep hill, Lilith reached some grass and trees. “Be careful, little one. People don’t seem to understand you very well,” she said, setting the book on the ground and lifting the pot off it.

He still clung to the book and chattered at her in high-pitched “chits,” and then opened out his wings and shot into the night sky. He looped down close to her twice before disappearing into the night.

Pest control’s going to look good on my resume.

She stepped carefully down the hill, through the back door, and finished closing up the store.

Lilith drove the short distance home meditatively, by rote, until she reached Settler’s Cabin Park, on the western edge of Pittsburgh. The blinking headlights on the park’s back road woke her up, and she braked and drew even with the white truck belonging to the lights.

“Ranger Ralph. How’d you know it was me?”

“Cleo. She’s in your picture window. Always shows up right before you get home.”

“Oh, sort of like dogs who know when their owners are coming home?”

“Yep. Got yourself a serious watch cat there,” he said. “Say, I wanted you to help me look out for some kids tearing around the trails on ATV’s.”

“That’s illegal, isn’t it?” She made out his nod. “I could send Cleo after them.”

“She’s fast, but not vicious enough,” Ralph said and explained about the recent reports of mayhem in the park.

“One more thing,” he said. “How’s the magical garden?”

“Now you’re making fun of me.” He teased her mercilessly.

“Oh no, I believe in magic. I’ve seen how beautiful and lush it’s grown this year--like no one else’s. Plus all the flitters and flutterers and creeping critters you’ve attracted. I’m impressed. Something’s definitely going on there. Just wanted an update.”

“Let’s see--this week I’ve had a doe and her two fawns visiting. The babies play like puppies, hopping all about.”

“So now they’re munching on your flowers,” he said.

“Good luck with that. I’ve thought of a new name for you.”

“Quan Yin of Settler’s Cabin Park. Has a nice ring to it, doesn’t it?”

“Ha ha. Cleo waits. I’ll let you know if I see the culprits.”

Lilith Devlin is shocked when a faery appears in her Pittsburgh garden and asks her to write a faery novel and perform a mysterious mission. Though the faery promises love, she’s paralyzed by fear, for her life of working as a bookstore manager and living in seclusion with her cat will change. She balks until circumstances force her to agree.

Right away, she flies to Ireland, where Old World faeries fascinate her with their ways. While there, she meets and is strongly attracted to New York editor Adam Kramer, who expresses keen interest in her faery novel. Her romantic hopes are waylaid, however, by his wedding band and female companion.

Weeks later, she and Adam land in Antananarivo, Madagascar, to prevent slaughter of endangered lemurs—the faery mission. Mystery and romance abound as Lilith and Adam search for lemurs, battle nasty characters, and allow island moonlight and breezes to transport them to a world of passion.

Blue Moon over Madagascar, first in the Lilith and the Faeries series, can be used as a fictional “faery 101,” helping you to connect with the faeries and invite them into your life. The next two novels are Smell the Plumerias, set on the Big Island of Hawaii, and Faery: The Final Frontier.

You can learn more about Ms. Corn and her work at: www.CathyACorn.com.

Cathy Corn has explored the faery realms since reading Doreen Virtue’s Fairies 101. She connects with spirit as a massage/energy worker and Reiki Master in Pittsburgh, Pennsylvania, and happily-ever-afters there with her husband, Alan, and their critters, Missy, Cato, and Bella. Her first published work, a romantic suspense novel, is Crystal Clear.