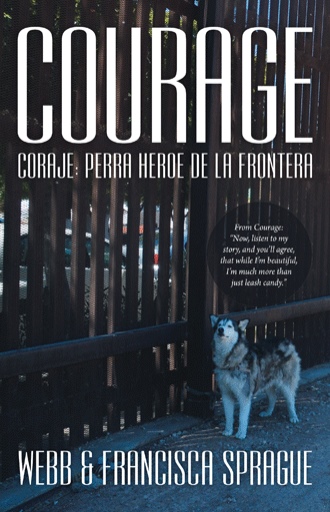 The Mexican Marines are closing in on Antonio and his fortified enclave outside El Dorado. Amid the acrid smell of teargas, sniper fire and the thunder of flash grenades he recalls seminary life:
“Bad boyze…bad boyze…what you gonna do when they come for you,” rang in his ears. Bad boyze became “bad boy” which is what the priest called him. During their sessions, the priest never removed his collar. Busy man had to say mass and hear confessions.
“I hated it,” Antonio shuddered. “Momacita wanted me to be a priest but died of cancer. Dad was killed by a crazed druggie. Statues of Guadalupe Virgin were everywhere but didn’t seem to help. That was when I got my statue of Santa Muerta, Death’s Saint. The nothingness of death gave me the strength to succeed in my studies and sleepwalk through the abuse.”

Courage is written for Americans by a Mexican and an American, about the Mexican-American borderlands: La Frontera. Follow the beautiful Siberian husky, Courage, as she leads us on a journey along the Mexican immigration and criminal path through California’s Coachella Valley, the Mexicali border crossing, Mexicali, and by the Beast—the immigrant train north—to Culiacan and a small fortress outside El Dorado. Experience pervasive corruption, bloody enforcement of criminal discipline, and the character conflict of the players in the dangerous game that costs fifteen thousand Mexicans their lives every year. Experience the dynamic of divine intervention, the selflessness of true friendship, and a profound hope for the future.

The authors met in class in 1997: Webb was an ESL teacher and Francisca his student. Fresh from earning a master of science from the University of Maine and service in the Peace Corps, Webb—a New Yorker, Columbia bachelor of arts publishing-brat and newly-minted educator—arrived in California to survive on adjunct teaching and book royalties. They both moved to the Coachella Valley in 1995: he to Palm Springs and she from Mexicali to Indio. Born in Sinaloa, Francisca grew up in Mexicali and has worked as a cleaning lady, a field worker, and in retail with Costco.
Married in 2006, they now live in Indio, the heart of the Coachella Valley, located about one hundred miles north of the border with Mexico and only a few miles from La Frontera. La Frontera is a second border; a gate to people and drugs moving north, and guns and money moving south.
Webb and Francisca cross back and forth on the border to visit Mexicali a few times a month and to visit San Felipe, Golfo de Santa Clara, and Sinaloa yearly. Their dog Courage, a beautiful Siberian husky, serves as narrator in the quest to save her humans, who are held hostage in the dark heart of Sinaloa. Our hero dog was a birthday present.