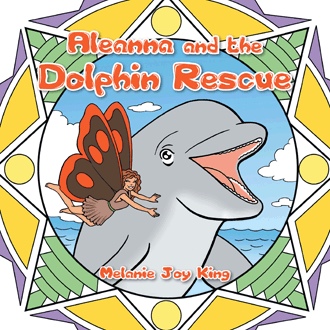 Aleanna was about to swim back to the shore when she heard a strange noise. It was a very high-pitched and frightening noise. She felt a chill go down her spine. Despite her fear, she swam towards the noise to take a closer look. A large grey shape revealed itself as she got closer. “Huh!” Aleanna gasped as she realized what was in front of her. A dolphin was entangled in a fishing net. Aleanna did not like fishing nets. The dolphin was struggling and struggling and calling out a distress call. Some other dolphins were swimming around. They seemed very anxious. She could see that the dolphin was getting tired. The dolphin was trapped. If it did not get free it would die. Aleanna knew that she had to help the dolphin very quickly. She had never used her magic to move anything so big before. She put her concerns aside. She recited the magical fairy incantation. “My special fairy magic that fairy folk can see is movement magic. So let it be.” She felt the magic build inside her tummy. It got stronger and stronger. “Alum, balay, cagic let my hands bring forth my movement magic.” Soon it moved up her body, down her arms and the hazy orange light burst out of her hands once more. It spread over the dolphin and the net. “Move the net. Let it be. Set this friendly dolphin free,” Aleanna declared. She twisted and turned her arms. She struggled and struggled. The net was too tangled around the dolphin. It would not come free. Aleanna could feel her energy weakening.

Fairy Princess Aleanna is an adventurous young fairy. Her sister Koralee is far more cautious. Together, they travel from the safety of their home, deep in a New Zealand native forest, to the beach. There, they enjoy swimming and riding the waves for a while. One last swim by Aleanna reveals a dolphin in peril. She uses some of her special fairy magic to try to save him. Aleanna does not realize that she may pay the ultimate price for this act of selflessness.

MELANIE JOY KING was born in Papakura in the upper North Island of New Zealand. She spent most of her childhood living on farms. She completed a Bachelor of Teaching in Early Childhood Education in 2007, at Unitec. She has been working with young children since then. Aleanna and the Dolphin Rescue is her first children’s book.