The TRUE HEART of a MAN

How Healthy Masculinity Will Transform Your Life, Your Relationships, and the World 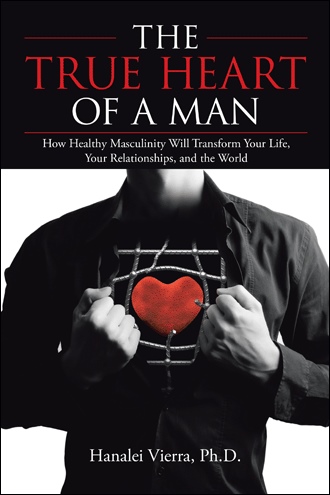 Let’s face it, most guys are still trying to figure out what the world expects of them these days in terms of what it means to “be a man”. For the past 50 years we have been caught between two different worlds of expectation that previous generations of men never had to struggle with. Our fathers and grandfathers never had to think about whether or not they had choices in how to express their masculinity. And they certainly had no question in their minds about what they would teach their sons about manly behavior. We have yet to create and even celebrate a healthier version of masculinity to teach our sons that is relevant to a 21st century planet. Our struggle thus far seems to be less about what to teach them and more about figuring out who and what we are becoming ourselves. Once we take care of this second piece we’ll be able to address the first one. All of this is because we are finally waking up and seeing the unhealthy consequences that traditional masculinity has had on our people and our planet for thousands of years. Like it or not, the “story” of traditional masculinity is in the throes of being re-written, and it is in all of our best interests to pay attention and have the courage to evolve with it. Without getting too cheesy by coining some phrase like men’s liberation, I believe that there is a need for men to set themselves free from the story they have inherited from their fathers and grandfathers about who and what a “real man” is. That traditional image of an emotionally stoic and insensitive “manly man” has devolved into a stereotype that, unfortunately, most men have successfully lived up to, and the world is no longer a better place because of it. The high personal price I believe men have paid for carrying out this malignant legacy is this: By ignoring and dismissing the truth men feel in their hearts, they ignore and dismiss their true happiness and calling in life. As men continue to carry out this limited version of masculinity, they sacrifice feeling a more authentic experience of themselves that they also keep from sharing with their loved ones. Whenever a man chooses to disregard and/or misrepresent what he feels in his True Heart, he in essence gives up his personal integrity and becomes a lesser version of himself. If there is one consistent observation I have made over the course of my 27 years of working with male clients in private practice as a marriage and family therapist, it is this: the universal definition of “masculinity” that men have identified with for millennia has become so unconsciously synonymous with their survival instinct that the two have become indistinguishable. A man’s instinctive urge to protect, provide, and procreate has evolved into a nearly equivalent expression of his “manliness.” In and of itself, this may not be a psychologically significant insight, but the ramifications appear in very specific ways when men are challenged to step beyond their survival “roles” as protectors/providers/procreators. This challenge is particularly evident in how my male clients, almost without exception, report their ignorance of how to create emotional intimacy with a woman. There is a recurring glazed-over look of cluelessness in their eyes when I ask them to describe, in even the most general terms, the “emotional connection” they have with their wife or girlfriend. I understand that I can’t generalize my anecdotal observations to describe the population of men at large, but it cannot merely be a coincidence only among the men who find their way into my office. As a clinician, I’m more interested in motivating changes in behavior rather than collecting empirical data. Still, I’m struck by the utterly consistent feedback I have seen across a wide range of men regardless of age, race, religion, and socioeconomic status. Nearly all of them seem to be confused about how to participate in their intimate relationships beyond fulfilling the protector/provider/procreator roles that they identify with coming from their survival instincts. This observation has helped me understand that naturally and unconsciously equating masculine identity with survival has an effect on men’s “access” to or understanding of their own emotional world. There is a paradox here that is subliminal, yet unavoidable, and is a direct result of this interchangeability between masculinity and survival. As a result of this phenomenon, here is what I consider to be the epic dilemma for my male brethren and me: The one thing that defines a man’s sense of masculinity in so many ways and which men are so highly skilled at and so proud of, i.e., survival, also happens to be the one thing that severely limits their depth of self-actualization and personal happiness. I call this the Survival Paradox. This, in turn, keeps them clueless about emotional intimacy: what it is, how to create it, and how to sustain it with a woman. As crucial and prevalent as it is in his awareness, a man’s instinct for survival – that primitive, fundamental, fight-or-flight urge to keep himself and his loved ones physically alive – actually constricts his ability to truly know and love himself, which then constricts his ability to truly know and love another person. Men struggle with how to create authentic, emotionally connected relationships with women because they are prisoners of the Survival Paradox. The irony here is how the men I observe almost always report feeling anxious at times about their feelings of inadequacy in their role as protector/provider/ procreators and how that inadequacy affects their desirability as relationship partners. Men assume that their competence at being adequate protector/provider/procreators is the thing a woman looks for in a potential mate, despite whether or not the woman can protect and provide for herself. This is a fundamental piece of the survival instinct of all human beings in order to successfully propagate the species. However, it is also important for men to understand that this is

MEN: Keep Your Balls, and Open Your Heart to the Woman You Love! Finally, a resource to learn how to strengthen your emotional connection with a woman in a way that can make sense to both of you. The True Heart of a Man takes you on an adventure into healthy masculinity that will rewire your knowledge of your emotional world, shatter cultural myths about what feels “manly”, and cultivate a deeper appreciation of your self-worth and personal integrity. With over 27 years of clinical experience working with men, Dr. Hanalei Vierra’s down-to-earth approach to 21st century masculine identity also offers unique insight about the emotional honesty necessary to create a healthy intimate relationship, and how a True Heart connection with a woman is truly not possible if a man compromises his authenticity and self-respect. This book will guide you to: • Identify your personal belief system about what masculinity means and evaluate all the ways it has shaped your identity both positively and negatively. • Explore how your survival instinct shuts down your ability to create emotional intimacy with others. • Learn the importance of self-care – which is different than being self-centered – and all the ways you’ve been trained as a man to take care of everyone but yourself. • Learn how to think and act more like a “we” than a “me”. • Uncover the courage necessary to live a life of authenticity, personal integrity, and self-respect. The True Heart of a Man is a guided expedition toward personal transformation as you learn to explore and appreciate the value of your own True Heart.

Dr. HANALEI VIERRA is a licensed Marriage and Family Therapist in private practice in San Diego, California. For over 27 years he has specialized in helping men access the testicular fortitude necessary to create true intimacy in relationships by freeing themselves from the prison of emotional ignorance that is traditional masculinity. Contact him at: www.hanaleivierra.com