Awakening on the Road

Book I—The East, the Story of My Travels around the World and My Discovery of the Invisible Forces of the Universe 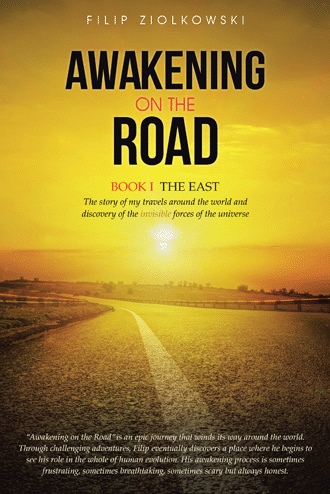 Since I had watched “The Secret” for the first time in London in 2007, I had been looking for signs to prove The Law of Attraction worked in everyday life. I also wanted to learn how to apply it in my own life. Initially I visited McLeod Ganj to participate in their ten-day course entitled “Introduction to Buddhism”. I was ready for a change of pace after months of beach bumming, partying and temple sightseeing. My goal was also to find an ashram and learn yoga and meditation but this course was as close as I could come. After visiting the Buddhist Center where the classes would be held, I decided to give it a try. I signed up for the course, which was to start in few weeks. To kill time, I took some random yoga classes with a young teacher named Krishna. I liked his sessions but soon found Agama Yoga School on the other side of town, which was recommended by my friend, Leo when we were together in Mumbai. I took the first free class to find out if it suited my needs. The course was led by Manu from Belgium and Monica born in India but raised in U.S. The very first yoga posture we practised, the spinal twist, was the one which coincidentally caused me the most pain in my hips due to my natural lack of flexibility there. It was as if this class was perfectly crafted for my health requirements. I also attended Monica’s evening classes which were about understanding, controlling and managing dreams. It was another small coincidence since I had recently been having strange dreams that I did not understand. It seemed that Agama Yoga was a good fit and a helpful way to pass the time before the Buddhism classes. I decided to move my accommodation closer to the Yoga Center. I checked in to my new room only to realize that my roommate was Krishna, my first yoga teacher in McLeod. It turned out that he had been a graphic designer as well so we had plenty to talk about. As we talked, our conversation turned to the subject of coincidences, which I had been noticing a lot of lately. He recommended that I watch a movie called “What the Bleep Do We Know?” It dealt with this subject and many more topics that were important, burning questions to me. When I watched the film, I could not beliee what I saw. Not only did this movie address the very same information that was in “The Secret”, but it did it in a way that was a bit more scientific and informative which appealed to me. The movie was based on a series of interviews with scientists and experts in the field of psychology, quantum physicists, and spirituality who explain the phenomenon of quantum physics and how it relates to our thoughts and how our thoughts in turn affect the outcomes of our lives. It was supported by a fictional story about a woman who discovers how to transform her unhappy life through tapping into the power of her own thoughts. Japanese scientist, Dr. Massaru Emoto demonstrated how water crystals take on the energy of the surroundings. It was a graphic illustration of how our thoughts impact our physical environment. Every minute I watched the movie, the more and more fascinating it became to me. In fact, I had to pause occasionally to simply take a deep breath, leave the room and stare at the mountain peaks, admire birds and enjoy the refreshing breezes from the Himalayan wind. As I had always done in my life, I asked God for a sign that this was truth. I took few deep pranayama breaths and came back with a fresh and open mind to my room to continue watching the movie. A minute later I realized that the main character in the story was a photographer who was going to a Polish wedding to take pictures. Another coincidence? How many American movies use the subject of a Polish wedding? But the truly astounding part that got my attention was who was getting married? Filip-owski and Humansky. Now, why would a script writer choose those strange names? It was a clear message for me that was the answer to my prayer. It was the sign I needed to affirm that The Law of Attraction works. Ask and it will always be given.
AWAKENING INSIGHTThrough the synchronicity of various events, it is possible to discover the answers to any question you have. It requires focus and paying attention to what happens in your life but the answer will be there. Ask and it will be given.

From that moment, I started to visualize outcomes that I desired. The results were astounding. People I wanted to pay attention to me began to be more friendly; I became attractive to a beautiful woman who had previously not even noticed me; even the primping and narcissistic ‘metrosexual’ hippies asked me to play guitar with them; I was also miraculously able to mentally control flies and mosquitos to leave me alone when I was meditating. These experiences were real proof that there is a force in the Universe that is responsible for the entire life experience on Earth. I now understood that all questions if asked with care and precision are answered either through meditation, dream, inner voice or a series of synchronistic events. We all have the potential to be super human beings, to be enlightened, to live our own ‘heaven on Earth’, to be like Jesus, Buddha, or any highly evolved spiritual being. All we have to do is ask how to peel away the dull stone layer to reveal the diamond underneath. When we ask, we simply have to listen to the inner voice that will give us guidance. The day finally arrived to begin the “ Introduction to Buddhism" course. It was just a twenty-minute walk to move from where I was staying with Krishna to the Tushita Meditation Center – just far enough to be able to enjoy the complete silence and be inspired by the beauty of the Himalayas and the wildlife that lived there. The course was designed to instruct participants in the Buddha’s teachings and to explain the steps of meditation based on Mahayana Buddhist philosophy. Initially I only wanted to learn about the basics of Buddhism so I could compare it to my Christian beliefs. I soon discovered, however, that it was a great way to detoxify from the whole outside world in which I had been so intensely immersed.At the Center, I shared a room with two friendly American students but we were not allowed to talk to each other. Each day we woke up early for meditation, ate breakfast, and then worked as volunteers in the ashram. In my case, I washed dishes. After our chores were completed, we attended a Buddha teaching class. During the instruction, I learned how to meditate by focusing on my breath. Doing so sharpened my mind and cleared my thoughts. There were also guided meditations that allowed us to get a deeper understanding of Buddhism principles. After the class, there was more meditation, which sometimes was a walking meditation. On one of these contemplative exercises, I spotted a wild bear grazing nearby and was always aware of the monkeys jumping on the roof when we meditated indoors. The close interactions with nature added a mystical dimension to the whole experience. Our teacher, a British woman who was also a monk often talked of the monkeys who interrupted our quiet meditations as the great patience teachers. I loved that expression.The meditations were followed by a one-hour group exercise. This was the only time we were allowed to speak. For the first time in my life I got the concept of unity, kindness, love and compassion for all sentient beings. I grasped the idea of love as a sincere wish for others to be happy. I finally understood the wisdom in the Buddha´s teachings, which were similar to those of Jesus’ principles. The Buddha’s lessons used different terminology and were more based on logic than faith but I found I could easily love both of these approaches. We also learned a lot about karma. By understanding the law of karma in our lives, I could see that reincarnation might be the only reasonable explanation for the injustices in the world.

“Awakening on the Road” is the story of a professional risk-taker and free-spirit citizen of the world whose epic travel adventures wind their way across the globe from the East to the West. After moving to London and burning out at a telecommunications job, Filip buys a one-way ticket to Italy. It is the first destination that begins his transformative journey to more than fifty countries as he searches for true love, authentic happiness and understanding of the invisible forces of the universe. His story is an honest account of encounters with the light and dark of humanity that contribute to profound changes in his life view. He finally stops in Cali, Colombia where - thanks to numerous spiritually awakening events- he discovers who he truly is and finds his real life purpose.
After years of backpacking and living abroad he finally decides to share his powerful travel experiences in the books:
Awakening on the Road—Book 1—The East Awakening on the Road—Book 2—The West

Filip Ziolkowski was born in Gdansk, Poland, and after two-and-a-half years of non-stop travel around the world, he decided to spend some time and take a deep breath in Cali, Colombia. It all started with an innocent weekend visit that four years later is still going on. In Cali, his life is filled with meaningful work, salsa dancing, meeting shamans, and spending time connecting with the wisdom of nature.
He currently works as a full-time professor at the University of Autonoma Occidente. He teaches advertising, marketing, design, and social media. He occasionally gives speeches about how he discovered who he really was by traveling around the world.
If you enjoy Filip’s experiences in this first book about his travels, feel free to read the sequel. You are also welcome to contact the author and learn more about his ongoing adventures on his blog: www.filipontheroad.com.