From Mormon to Mystic 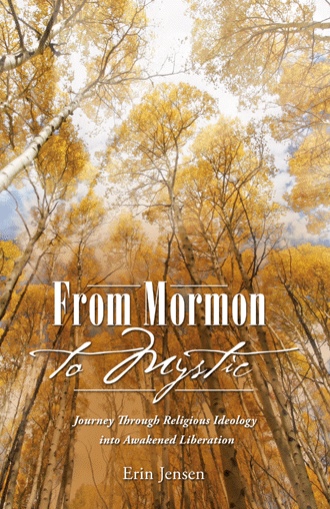 I had been immersed for years in a dysfunctional relationship with the Church. And I knew that I had to resolve my dance with Mormonism if I was ever going to move ahead in my spiritual life. I was in my fifties now and I had no time for ten year detours. I had been given a reprieve on my life when I survived, at age 39, what should have been a terminal illness. Now, watching the months tick by all too quickly, I was becoming more and more restless with unresolved issues. The bottom line was that staying stuck was more torturous for me than risking all that I was or thought I was, in order to delve into the unknown. I determined I would enter into that pathless territory that was meant for only me, what mythologist Joseph Campbell called the hero’s journey, and do whatever it took to gravitate toward and eventually immerse myself into the divine—whatever that meant. I had dragons to slay and my own shadows to contend with. What I would eventually come to understand was that I had the ability to free myself all along. When I was finally willing to take complete responsibility for my life, my world began to shift exponentially. Once I began this sojourn into the deepest fissure of my soul, coincidences began occurring every day . . . I knew instinctively that I must use the stages of faith as a backdrop for my own journey through Mormonism and into a realm that transcends all traditions, where I move ever closer to the Light, from Mormon to Mystic.

From Mormon to Mystic: Journey from Religious Disillusionment to Soulful Liberation chronicles the journey of a sixth-generation Mormon woman. She travels a path that takes her from a tightly knit and theologically strict religious community to the open expanses of a mystical understanding of reality. Erin Jensen weaves together the account of her transformation and the strands of insight that come from James Fowler’s Stages of Faith. By rooting her narrative in the vivid details of the steps she takes along the way, the author tells how she weathers her life’s challenges, including a federal court “witch” trial, and emerges from the depths of several “dark nights of the soul.” While From Mormon to Mystic immerses itself in the details of one life, it simultaneously offers guidance for anyone seeking to overcome the strictures of rigid systems of belief and behavior. In its pages, the reader will learn how to make his or her way toward freedom and wholeness by understanding how faith develops, learning to work with shadow qualities, practicing non-attachment, taking personal responsibility, trusting one’s ability to choose, appreciating the power of total forgiveness, connecting to inner sources of wisdom, and embracing a state of consciousness filled with hope, love, and peace. From Mormon to Mystic: Journey from Religious Disillusionment to Soulful Liberation offers both a narrative of one woman’s path to spiritual freedom and a guide for others who seek their own way from the confines of their current circumstances to the liberation they desire to envision for the own futures.

Erin Jensen, born a sixth-generation Mormon, grew up in Utah. With degrees in writing and communication, she specializes in interpersonal communication skills. As an educator, writer and integrative coach professional, she works with former Mormons transitioning out of the church. She and her husband, Cliff, live in Marysvale, Utah.