One Woman’s Life-Changing World Trip with her Teenage Daughter 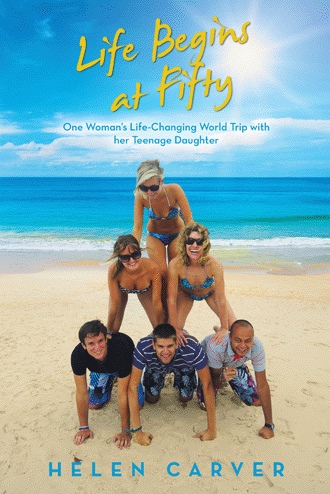 17 September 2009
It had been the shittiest of years! In fact, I couldn’t, in all of my forty nine years, remember a more annus horribulus! After thirteen years of friendly separation, there had been three years of horrible divorce shenanigans. I felt as if I’d been embroiled in a tug of war with my husband, who was procrastinating at every turn and my boyfriend who just wanted it all done and dusted and was forever ranting and raving about the ‘ridiculous’ time it was all taking. And then there was me, piggy in the middle, trying to steer everyone through these choppy waters with a modicum of calm, even though I felt like the captain of a sinking ship and on many occasions would have been quite happy to walk the plank, just to get away from it all. Believe me, divorce is excruciating painful, not only because it pitches you in battle against someone who was once your best friend and lover, but also because of the way it makes you feel. Lousy! Completely and utterly lousy!

Anyway, enough of that! Suffice to say it was the tipping point for my midlife crisis, which was LONG overdue, I can tell you. I decided I’d had enough of doing a ‘safe’ job in estate agency, plodding away ‘til six or seven at night, day after relentless day. I wanted to do something exciting that I could tell my grandchildren about. Something gob smackingly, wonderfully barmy! I blame it all on Michael Neill, really. He’d written this brilliant book called, ‘You Can Have What You Want’ * and it gave me all sorts of weird and wonderful ideas about what I could do with my life. As I turned the last page, I was seriously considering jacking in my job, renting my house out and tittling off around the world for six months. Yes, seriously. Then reality hit home of course. What about my mortgage, my job, my security?
‘Oh for God’s sake, Helen,’ I told myself. ‘Just get real, why don’t you?’

Then I got a bit cocky. I thought I’d test the idea out on my daughter, Rachel, who was toying with the idea of a gap year. (Nicola, my eldest daughter was in Bordeaux and going to Mexico soon, as part of her year out from Sheffield Uni).
‘Erm, what would you say if I suggested going off travelling around the world for six months, Rache?’ I asked nonchalantly.
‘Around the world? For six months? SIX MONTHS? Oh my God, that would be fantastic! Fantastic! Yeah! Ooh, yeah! When are we going, mum?’ she shrieked.
Oops! Me and my big mouth!
‘Well, err, I’m not sure. Err, I mean, are you sure it’s really such a good idea? I mean, what about err….’

*You Can Have What You Want by Michael Neill

‘Don’t be daft. It’ll be brill! Ben can’t make his mind up if he wants to travel or not and all my friends are going straight to Uni! Boring buggers! Yey! Ooh, wait ‘til they hear we’re going off travelling Mum.’
Bloody hell! This was more serious than I thought. Crikey! Think woman, think! Damage limitation! Aversion tactics! Do something. Anything! Quickly! So I thought… and I thought … and I thought some more ….and after a while I thought why the hell not? After all, you only live once, don’t you? And, as I’m always telling my two beautiful daughters, this life ain’t NO rehearsal. Oh, just go for it, you daft tart. Silly not to, really.

Fast forward four months and I’d planned the trip by talking to Chris (who was the oracle on just about everything,) lots of twenty year olds who’d already been around the world and Mark at STA Travel, who was an absolute gem.
‘Ooh, you organise it Mum. I don’t even know where half of these places ARE,’ Rachel would yawn.
Very helpful for a nineteen year old. Mind you, she might not know where she DID want to go but was very sure where she DIDN’T. One of her pals, Sarah told us that she’d loved South America and it was definitely worth a visit.
‘Mind you, one of my friends got off the plane in Peru and promptly puked up when the altitude hit her. Then she had to stuff tissues up her nose ‘cos it just started bleeding all over the place,’ she grimaced.
‘Ooh, we’re NOT going there,’ Rachel shrieked.

Then there was protection and no, I’m not talking safe sex. Rather protection from insects and the like. The fairly rotund and jolly vaccination nurse at our local surgery looked quite bemused as Rachel and I waltzed into her office and told her of our plans.
‘So which countries are you planning to visit, mum?’ she asked.
‘Mmm, let’s see. South Africa, Mexico, San Francisco, Hawaii, Maui, Fiji, New Zealand, Australia, Borneo, Singapore, Malaysia, Thailand, Hong Kong, China and finally Sri Lanka,’ I giggled.
‘Good golly. You two are going everywhere aren’t you?’ she smiled, before jabbing two syringes into our upper arms.
Ouch! Then her face took on a rather more serious demeanour.
‘Two women on their own, travelling round the world. You’ll have to be careful,’ she warned, as she waggled her finger at us. ‘And you, mother, you might think you’re not in any danger. Think again,’ she chided.
Crikey! I felt like a naughty sixteen year old being warned about the dangers of promiscuity. As if!

“Twenty years from now you will be more disappointed by the things you didn’t do than by the ones you did do.”
—Mark Twain

Ever wondered if there must be more to life than this?
Ever thought, “It’s now or never”?
Ever wanted to travel the world?

At the ‘ripe old age’ of fifty, I decided I wanted some fun - I wanted to live rather than just exist! I wanted some wild and whacky experiences to tell my grandchildren about in years to come.

So, after years of feeling like a hamster in a wheel, juggling work with children, I rebelled in the most spectacular way. I walked away from my job, rented my house out, went off travelling around the world for six months with my nineteen-year-old daughter, and embraced a whole new way of life.

I hope you laugh as much as we did at the crazy things that happened to us and the madcap things we tried (white-water rafting, skydiving, hiking up glaciers, jumping off waterfalls and posing naked in front of them, to name a few).

I hope it makes you realise that you only get one life, and now is the time to start living it, doing what you really want to and enjoying every precious moment. Follow your dreams—you’ll be amazed where they take you! I did, and my life has never been the same since.

For more information about Life Begins at Fifty, please go to www.lifebeginsatfifty.info

Brought up on a farm near Darlington, County Durham, Helen Carver lived a fairly average life up until the age of forty-nine, working in estate agency and bringing up her two daughters. Since travelling the world at fifty, she now inspires others to live the life of their dreams.