FACE TO FACE WITH SPIRIT

An Architect’s Journey of Discovery 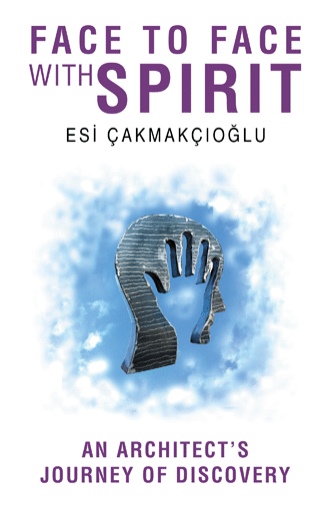 PREFACE As the plane took off, I was sitting next to my partner, trying to ignore the pain coming from my toe, which I had broken only hours before leaving Hong Kong for the last time. When we landed in London, my life would change completely. We would say goodbye and set off in different directions, never to meet again. The exciting architectural projects in hot and humid countries, the flying to different exotic places for both work and holidays, and all the travelling to and from Europe would be left behind. I didn’t want to live in the Far East any more. I missed Europe, but where could I call home? I had no idea! Could I settle in my flat in London or would it be in Istanbul? I had enjoyed such an adventurous life and experienced so many temporary homes. Until then, fixed plans for more than a month in advance were not a feature of my life. Looking back, I seemed to have travelled everywhere but never belonged anywhere! Now was the time to settle in to a job and a home, and put a plan in place. What I did not know was that Life had different plans for me! It was to be the beginning of a journey unlike any other!   INTRODUCTION Not long ago, I was presented with a plaque by the Istanbul Metropolitan Branch of the Chamber of Architects to mark my fortieth year as an architect. Yet, almost all of this span of my working life as an architect and urban designer was spent outside Turkey, covering projects in twelve countries: Europe, Saudi Arabia and Far East Asia. I have always considered myself lucky and privileged in my professional life. I’ve had a busy and adventurous life; my journey has taken me to many places and through many experiences, including the exploration of my emotional past, and a major cancer operation. As with all life journeys, some were consciously planned, some not. What wasn’t included in my plans was being introduced to Spirit —but that is what happened! I was first introduced to Spirit in 1987. Although this completely unexpected experience did cause me to question our ‘reality’, it came at a time when my life was too busy for any further consideration. It took another thirteen years until the doors into this magical world swung fully open to me. I was brought up in a family of scientists. My father’s fields were Mathematics and Astronomy, my mother's Chemistry and Physics. As children, one of our ‘playgrounds’ was my mother's laboratory at the college. I do believe that my exposure to this scientific environment gave me an enquiring and curious mind. Like any other child I was curious about the universe and life on earth. Why are we here on earth? Why was I born to be the child I was? What about my friends, my family, all these people on earth? What happens when we die? I was full of questions. Did I, however, ever think I would one day be working with the Spirit and that I would be given answers to my questions and even more? The answer would have been ‘No’ until the year 2000. On my return from the Far East in 1999, I set about re-establishing myself in the UK as an architect and urban designer with yet another home, while making regular trips to Istanbul to care for my frail mother. Throughout this time, however, I was also walking another path, which led to a completely new world full of wisdom and wonders. The spiritual world that opened in front of me showed me that there really is no death. We are all spirit, dressed temporarily in physical bodies, and ‘dying’ is simply the shedding of these physical bodies to return to the energy world that we come from. I now consider myself privileged in that I am able to communicate with the Spirit to help people in mourning by providing them with evidence that life is eternal. This I do both by communicating with and sketching the portraits of those in spirit whom they thought were lost forever. I had no expectations in terms of what all my life experiences were leading me to. Today, I am grateful to realise that I now see ‘life on earth’ in a completely new context — a framework that explains why we are here and how our lives are shaped from birth to death by the choices we make along the way. More importantly, it is this understanding that not only empowers us but also brings meaning to our lives. I hope the stories I relate and the portrait drawings I have included will lead you to the same conclusions I came to. That is, that consciousness doesn’t reside in our brains but belongs to spirit. On a recent visit to the Spiritual Association of Great Britain (SAGB) in London, one of its respected mediums, Terry Tasker, gave me a message from my late father. This is what it said: Dare to be a Daniel Dare to stand alone Dare to have a truth Dare to make it known I have never considered writing to be one of my gifts! I never kept a diary until I was introduced to the Spirit, but fascinated by this new world in which I found myself, I began to keep notes. This proved far-sighted, because my scribblings have enabled me to recall the details of the most exciting journey of my life. Encouraged by my father’s message, I started to write. Then I had a dilemma; I knew what it was that I had to make known and, further, that to be a true account it could be based only on my own experiences and what I have witnessed along the way. That is how I decided to tell my truth through my journey, in the hope that it may be a starting point for your own.

FACE TO FACE WITH SPIRIT tells the extraordinary journey of an architect whose work took her all over the globe and whose projects included designs for private clients, governments and royalty. But her horizons expanded even further when she became a medium. From drawing portraits of those in Spirit, to discovering the healing power inherent in us all, to understanding how the emotional lives and belief systems of families can affect generation after generation, this voyage took her to even more exotic locations.

Esi’s journey, told with humour and the touching stories of people she helped, reveals how her experiences freed her from the belief that we have no choices in our lives—that we are randomly born to certain families and societies, we grow up, and then die. Instead, her journey led her to a completely new way of looking at Life. FACE TO FACE WITH SPIRIT will encourage you, too, to start questioning old habits and ideas, and find the knowledge that will bring new meaning and self-empowerment into your own life.

“Just as I started to think that my adventurous life was finally settling down, a completely unplanned and most astonishing journey began, taking me to a place of wisdom and wonder. I was introduced to the world of the Spirit, but that was just the beginning!”

ESİ ÇAKMAKÇIOĞLU is an award-winning architect and urban designer with over 40 years of experience worldwide. She lives in London and for the past twelve years has been working internationally as a spiritual medium, artist, healer and clinical hypnotherapist. www.artofspirit.co.uk