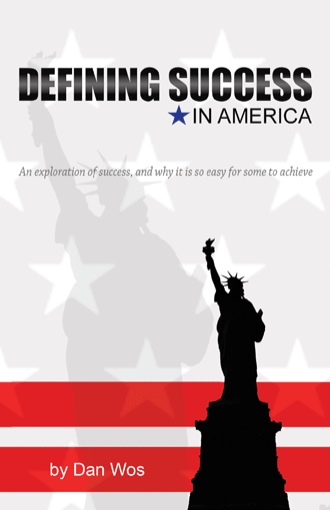 From the wild world of rock ‘n’ roll to the dynamic world of business, Dan Wos takes you on an exciting, informative and sometimes shocking ride while exploring the meaning of success.

Defining Success in America takes the reader through some of the most critical moments in the life of the author—the moments of change in perspective and mindset while transitioning from the world of music to the world of business.

Defining Success in America is about skills, tools, and setting your brain up to succeed, but it’s also about looking at life from a new perspective. It captures moments in time when the transitions occur so the reader can see and understand that it is possible to make transitional decisions in life with ease. These transitions can be exciting and not nearly as terrifying as some might think.

See how a kid from the rock ‘n’ roll world developed the skills and tools necessary to move into the business world. Learn how successful people direct their lives, carve their own paths and achieve anything they want.

Not only is Defining Success in America an easy read, it is packed with powerful and insightful information. The tools, stories and expert interviews provide a much-needed blueprint to refer to while moving forward in business, career and life. It doesn’t matter if you are starting a business, changing jobs, or perfectly happy in your present career. Everyone can have success in America and the big secret is, you already have all the tools you need.

Defining Success in America will cover:

• Money
• Goals
• Health
• Business
• Happiness
• and the one thing you need to achieve them…your brain.


“I found Defining Success in America to be a captivating read that was insightful
and humorous in the right places.”
—Jason Morris, 1992 Olympic Silver Medalist

“The more I read, the more I couldn't put the book down. I found myself actually
excited to get to the next chapter!”
—Glenn Schworm, Signature Home Buyers

Dan Wos is an American entrepreneur and musician. He is founder and President of three corporations—including House Detective Inc., a home inspection & appraisal company serving many markets in the United States (housedetective.biz). He is also an active real estate investor.

Dan has been a musician since the age of nine and has toured extensively in live bands, with many published works to his credit—including the 2000 Iron Cat records release “U.S.Bandit” and the 2006 Iron Cat records release “Voodoo Man” by the Dan Wos Project. Some of his music has been featured in TV shows, commercials and on radio in many countries around the world.

Dan is interested in architecture, graphic design and collector cars—primarily Corvettes, of which he has had an extensive collection over the years. He educates in the areas of real estate investing and home inspections, continues to record music and enjoys new business ventures as often as possible. Dan currently lives with his wife and son in Saratoga Springs, New York.

Visit Dan at: www.danwos.com
Get Defining Success in America at: www.definingsuccessinamerica.com