And the Key to the Universe 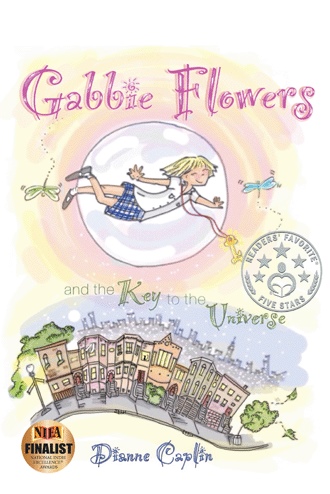 CHAPTER ONE
THE GIRL WHO FLIES
“Oh drats,” Gabbie said as the silver cord attached to her belly whisked her from the Hall of Reconnection and back to the brownstone on East 68th Street, where she lived with her Nana Alice, her father Michael and older sister, Victoria. She wished she had more time, but the alarm was ringing in her bedroom and her sister was getting tired of trying to wake her.
“See you to tomorrow night,” she shouted to her mother Katherine, though her voice was now barely a whisper. I followed her through the wall between dimensions. Her blonde bob twisted like rope as her soul soared through the morning sky. We zoomed past the skyscrapers looming over the city. The streets were quiet except for the squeal of a distant garbage truck. Taking a sharp left around a fifty-story building we headed south towards the center of town. To the people inside the building and to anyone loitering on the streets, we were totally invisible.
Gabbie squeezed her hazel eyes shut as she approached her home. It still freaked her out to pass through things, though she didn’t feel a thing.
Swish!
We traveled through the red clay roof tiles, just like a rush of wind through the maple tree outside her bedroom window. We went through the attic filled with old junk Nana Alice didn’t have the heart to get rid of. There was the highchair the girls used before they came to live there. Gabbie’s tricycle and Victoria’s scooter, and a steamer trunk plastered with stickers from far away places. Gabbie told me, one day, we’re going go to each and everyone of them. And thanks to the silver cord attached to her belly button, her soul could travel anywhere in the universe while she slept.
Inside the trunk was fancy dress up clothes. Gabbie loved to play dress-up. But Victoria, two years her senior, didn’t have time, or the desire to play the games they used to play. “I’m almost thirteen,” she said, “too old to pretend I’m a princess.” Or a movie star. Or an heiress, who lived in one of those fancy penthouse apartments on Fifth Avenue. She’d rather read, or text her friends.
Gabbie tried to talk me into playing dress-up, but I refused, not in my job description, I said. So the old fur stoles and yards of costume pearls gathered dust instead of applause and laughter.
As Gabbie’s soul passed through her bedroom ceiling she flailed her arms trying to steer to the left. I knew at this rate she’d miss her body completely and pass through Victoria, who was standing over her bed blowing hard into a whistle. I gave her a shove. It’s a horrible feeling to pass through a human being. Thankfully, it worked.
As soon as Gabbie’s soul merged with her body, she sprang up in bed. Her eyes popped open. “I’m up,” she said clamping her hands over her ears.

Gabbie Flowers never imagined that winning the school mural contest would turn into a nightmare. She knew her friend could be mean, but she never thought she had the power to make her favorite things—like flying through the night sky with her invisible friend Samuel, and visiting her mother in Heaven—come to a crashing halt.   Samuel holds the key that can put the bullying to rest, but due to Gabbie’s fear, she can no longer see him.   Desperate, he must find a way to get her attention before he, and the key, disappear from her life forever.

When Dianne Caplin isn’t reading a book about spirit guides, angels and the law of attraction, chances are she’s writing one.  Ms. Caplin and her husband live on the east coast of Florida where she’s working on her next book.  Visit her on the web at www.Diannecaplin.com or www.Gabbieflowers.com