An Interspiritual Journey to Judaism 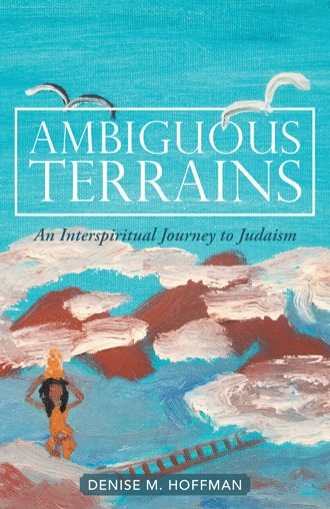 Coming Attractions A Behind-the-Curtain Preview of Ambiguous Terrains: An Interspiritual Journey to Judaism Immersion......Interrupted! The Heavenly Court looked on from it's place within the trees. Diverse Angels, Archangels, and Guides, were observing the ritual immersion in what was referred to as the pond of clarity. The beautiful cerulean blue waters, kissed by the rising sun and surrounded by butterflies and dragonflies, provided a lustrous backdrop for the immersion ritual that was part and parcel of conversion. Yet, even with the candidate immersing twice and reciting the ancient prayers, the pond of clarity was now revealing itself to be anything but clear. In fact, clouds were starting to lend a murky overcast not only to the water, but to the skies above. There was only one more immersion left to the ritual. What would reveal itself remained to be quantified by more than just the mere five senses. "Something's amiss," remarked the first Guide. "It certainly is," remarked the second Guide. "I've never seen anyone greet their unique destiny, their becoming, with as much mixed-bag emotion as this one. The heart is there alright, but there's something clouding over it....keeping it from full expression. A certain doubt of sorts," observed the first Guide. "It goes far deeper than that," the third Guide chimed in. "For all of the excitement that this one had during her journey, there has been unresolved trust issues. This is understandable from many different perspectives. For starters, this one chose a very difficult incarnation for the sake of spiritual growth. It is difficult enough to leave one realm of existence to incarnate on planet earth, which has one of the densest energy fields. In this one's case, that initial loss, cellularly embedded and preverbal, was compounded by an incarnation that, in some respects, repeated that first initial loss, and has been felt more acutely on the earth plane....where everything is felt and experienced more in depth. Adding to that is the reality that this one is also an empath......which means that she not only has the ability to feel the energies of those surrounding her, which is a blessing at times, she can, if not careful, absorb those energies, which can block her own internal voice, and the ability to know when and when not to use her healing gifts." "This doesn't look so good," remarked the first Guide. "Things are not always as they seem," the third Guide whispered, and then, in a much lower voice, called for the other two Guides to come closer. "The person before you has done much healing growth on her own, and remember, the ritual before us is not about being perfect, and/or healing everything all at once. There indeed is a cycle to all of this, and it's wisdom must be respected and not rushed. All planes of existence are interconnected. The earth plane, even with all of it's challenges, is the place where purpose is manifested into physical existence. Leaving one plane of existence for another was never about punishment, as many well-intentioned yet misguided souls have suggested. It's about, among other things, flourishingly becoming, and trusting in one's Center, especially when one chooses to incarnate without an earthbound identity already attached. "Still," continued the third Guide, "such flourishing can only occur with trust. Though this one before us has done much spiritual work, there is still some more work to be done in this area." All three Guides nodded in agreement. Each closed their eyes, took in a deep breath, and raised their hands to the heavens..... ........which then halted the third immersion! The candidate found herself struggling to rise up, and then found herself being pulled deeply into a vast dark void by invisible hands. In the midst of her struggle, she started to realize that she was actually breathing underwater and no longer struggling! If that wasn't a miracle....what was? In the cool darkness of that void, and amidst bubbles, a voice beckoned, and she felt a gentle tap on the space between her nose and upper lip. "You have trusted so much up until this point. Why, at this very moment, are you losing trust?", intoned the gentle-yet-firm Voice. "You have let go of a lot of baggage, and that's a good thing. It's not required that everything be released all at once. As you already know, healing has it's own cycle. We do our part, and then surrender without trying to control it. Nonetheless, for this ritual to culminate, trust must be first and foremost.....beginning from within. You've intuitively always known this, yet somewhere there's been a disconnect. This vital truth has been buried. It's time for you to cross some bridges into realms both familiar and unfamiliar....and with the help of some trustworthy companions. You will be guided and reconnected once again with your Highest Truth." She could not argue with truth...especially one as deep as this one! "Take some deep breaths", intoned the Voice. "Be open to receive." In that cool dark space of a void, the bubbles started to become larger and larger. As if by instinct, she curled herself up in a ball and watched as a vessel-shaped bubble came toward her, slowly enveloping her. Oddly enough, she felt safe and serene. No one, at least on the surface, what was going on within the deep recesses of the pond of clarity. On the outside, everything seemed calm. No one, that is, except the Guides, who stood in sacred silence before the pond of clarity......which now appeared calm and clear.

A longed-for meeting between a woman and her birth family spurs fantasies of a "happily ever after" utopian togetherness....a secret longing that may exist within the hearts of many with an adoption, relinquishment, and reunion experience. Instead, and unknown to her at the time, that longed-for meeting would actually serve as the catalyst for stepping onto the wanderer's path. A path of spiritual awakening, and, in some instances, remembering, that would involve walking into the deepest, and sometimes, treacherous, of ambiguous terrains. A path guided by totemic sages of diverse spiritual practices that would lead to a far different reunion: reconnection with The Creator....though more as a partner and less than a parent. And a path, concealed from that initial reunion day, that would eventually reveal itself via embracing a home within the heart and soul of Judaism.

Denise M. Hoffman, whose earthly roots are a culturally diverse tapestry of North America, South America, and everything in between, is an author and workshop presenter on issues related to adoption and reunion healing, spirituality, and energetic/empath sensitivity. She is conversant in both Spanish and English and is evolving in Hebrew and Ladino. She holds both BS and MS degrees in health and wellness and is currently a Personal Trainer at a hospital-based fitness facility in Gretna, Louisiana. She is also a level I Reiki practitioner. Her previous books include Ocultanto No Mas / Hiding No More: Unmasking Adoption and Reunion and Descubiertos/Uncoverings: Growing from Adoption and Reunion (Rosedog Books 2009). Her current and continually evolving work includes empowering empathic souls to recognize and develop their spiritual gifts, and women’s holistic health and wellness, because when women are fully healthy, everyone on this planet, including the earth herself, benefits. These two are largely interconnected.