Autobiography Of A Nobody

Stories From A Miracle-Filled Life 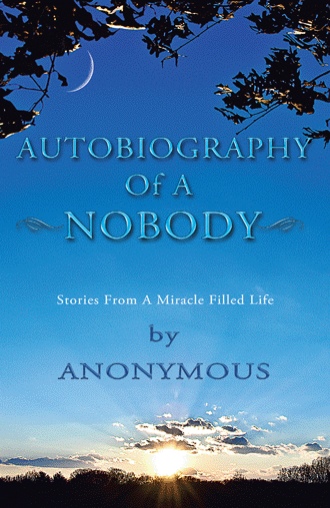 All of a sudden, apropos of nothing, Max got up, and walked over to our sofa, and then sat down with just his back legs, directly in front of me, and stared intently right at me. I looked away from the television, and smiled at the dog. I looked him in the eyes, and he seemed, as he often did, completely humorless, all seriousness. With a big smile, I said softly aloud to this ever so serious, intently staring canine, “What? What is it, Max?” He did not move. He did not make a sound. He just continued to stare at me directly and intensely. And so I asked again; “What do you want, Max?” And that is when it happened. One of the most thrilling, life-changing moments of my entire life. Suddenly Max “threw” me, psychically, an entire thought concept, fully worked out in great detail, communicated to my mind all at once, all of a piece, and completely constructed without words. And then instantly, in a way I cannot possibly explain to you, my mind immediately ‘translated’ this conceptual “thought package” into the English language for my consciousness. And what it translated to, was this: “You say you speak dog. Then tell the others of your kind this: if that cat goes into G.’s office one more time, I will kill it. But if you can keep it out of G.’s office, I will learn to live with it, for the good of the group.” What I felt at that moment was so overwhelming, that I decided I should probably hide my feelings from Max, lest I scare him. Also, I think that I wanted him not to regret having sent me this message, when after all, I was the one who told him that I could speak dog! And so I decided to play it really cool. I took a deep breath, containing my emotions, and I looked over at G. and then at my girlfriend E. I knew that neither of them were the kind of people who would take this kind of news openly and easily; but I was made fearless by the fact that both Max and I knew that this had just happened. It was two against two. A tie. (And the cat Hussy didn’t count.) And so I spoke; as all the while, Max remained exactly as he had been, sitting upon his back legs directly in front of me, still staring intently at me in silence. “Um, you guys;” I began; “I know this will sound strange to the two of you, but the fact is, Max here wants me to tell you guys something.” G. looked at me like I was a nutcase and simply snorted. E. laughed a small laugh and asked, “Max does?” “Yes.” I answered. “Um, Max says that if Hussy goes into G.’s office one more time, he’s going to kill her. But that if we can keep Hussy out of there, he says he will learn to live with her for the good of the group.” And then I turned back to look at Max. “Is that right, Max?” I asked. And it was then, and only then, that Max let out one, quick bark. And then he got up, and calmly walked back over to below G.’s sofa, and laid down again at its base, just as he had been before. And again, G. just snorted, looking at me like I was really weird, and my girlfriend E. smirked and simply said, “Okay..” and then the two of them went back to watching the television. And such is the behavior of most people, even when the life changing happens right in front of them: they dismiss it as something which couldn’t possibly have just happened. I suspect also, that neither one of my roommates wanted to embarrass me with saying aloud what they were probably thinking about me at that moment. At its kindest, it was most likely something to the effect of ‘You sure have a lot of imagination, C.’ And what did I learn in those few moments, when suddenly I was shown first hand that much, much more than most people are aware of goes on in the minds of our animal companions, everyday, all around us? First and foremost, my estimation of the intelligence of animals was exponentially broadened. I immediately felt so silly for all the times I had spoken condescendingly about an animal right in front of it. But also, I had many common beliefs about our pets shattered in an instant. It had been almost three hours since I had said to Max “I speak dog.” Max had obviously been kind enough to have taken me at my word, even though in the first moment I had said it he had looked at me with disbelief. And then obviously, for the past three hours, Max had been mulling this over in his mind, considering how to make the best use of this new found way for him to communicate.

From an early age, Anonymous began experiencing miracles as a regular part of his extraordinary life. From being run down on purpose by a Lincoln Continental and viewing the aftermath from the sky twenty feet above the accident in an out-of-body experience to having his most secret thoughts read by a madman on the National Mall to meeting Ram Dass by personal invitation and having Ram Dass’s own guru, Neem Karoli Baba, speak to him inside of his own mind, Anonymous has experienced occurrences others can only imagine. Now, in Autobiography of a Nobody, Anonymous relates many of the miracles that have made his life so strange, amazing, and magical. If you are interested in how miraculous and paranormal reality can be, or if you simply want to know firsthand what it is like to talk to a German Shepherd dog and have it answer back, then this little book will amaze and delight you through each miraculous life lesson shared in Anonymous’s easygoing and friendly conversational style.

Anonymous has been, among other things, a professional actor, a director’s assistant in Hollywood, a burger flipper, a chauffeur, a professional headhunter for the solar energy industries, a truck driver, an acting teacher at a charm school for teenagers, a disc jockey, and a pizza maker. Through out all of it, God has filled his life with miracle after miracle.
In his teenage years, Anonymous discovered the Eastern religions and their unique viewpoint on the nature of reality. In the 1970s, after meeting and talking with spiritual icon Ram Dass by personal invitation, Anonymous headed out to Hollywood, where he lived and worked for six years.
Today, Anonymous lives on the East Coast in Maryland, where he creates art on his computer. A self-confessed nobody who has lived a miracle-filled life, today Anonymous takes photographs of nature and continues his study of the strange illusion we all have agreed to call reality. Autobiography of a Nobody is his first book.