Powers of the Archangel Michael 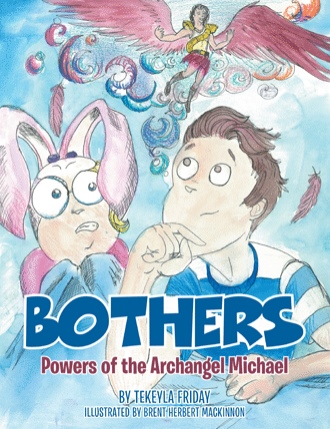 Maya screamed as she ran into her brother’s room. “The Bothers are back! Gage, I’m scared. There is the spooky shadow man, the little girl with pigtails that always takes my teddy bear and the old woman that smells funny like smoke. Let me sleep in your bed.” Maya tugged at the blankets letting wisps of cold air trickle beneath. Brrrr, thought Gage, pulling his covers closer. She wrestled a corner of the blanket out from under him and scrambled into bed. “Maya, go back to your room and go to sleep,” he mumbled. “The Bothers won’t hurt you, they’re just visiting.” “Kimmy says they aren’t Bothers. They’re ghosts and she has them in her house too. Ghosts are scary.” Gage chuckled and then yawned. “Kimmy might have ghosts. I wouldn’t know for sure. I’ve never slept at her house. We have Bothers. You can ask Mom about them. She used to see them too when she was a child which is why you and I can also see them. It’s a gift. The Bothers would keep me up all the time too if Mom hadn’t taught me about the Archangel Michael.” "Archangel Michael?" Maya asked. Gage nodded.

Five year old Maya is frightened of the Bothers, who pester her while she sleeps. They want her to get up and play with them. It’s so hard to rest when you have a room full of invisible visitors watching you sleep or one who constantly steals your favorite teddy bear. She wakes up her older brother, Gage, to comfort her and he teaches her about the Powerful Archangel Michael who helps the Bothers go away. “After seeing Tekeyla for a session, I used the tricks she told me with the crystals and Archangel Michael. What a difference! My son no longer complains about invisible beings bothering him when it’s time to sleep. One night, shortly after I had put the crystals in the corners of his bed, he came running into his room and jumped on the bed and looked at me and said, “Pheew, I feel safe now.” He has slept soundly ever since. I am excited that Tekeyla wrote a book to help other parents teach their children about the Archangel Michael and how he can guide them to sleep” - Charity Dumonceau “Tekeyla is gifted with amazing ways of communicating angel messages. You will see this in this book how she shares about angels on a level that is easy to understand for children.” - Clara Penner, author of Gentle Steps On A Journey To A Healing Heart. “What a great way for children to learn about Archangel Michael and how powerful he is at keeping them safe and protected. This story is a simple way to teach children about him. Bravo!” - Rose ‘Shuneaj’ Sangregorio CEO Metaphysical Center of Canada Corporation and author of Journey To Self-Enlightenment.

Born an Indigo Child, and naturally gifted from birth, Tekeyla Friday brings more than sixteen years of experience to her North American Practice as an angelic medium and angel certified practitioner and spiritual healer. Around fifty percent of her clients are parents who are concerned with their children having sleep issues because of nightly visitors and nightmares. Tekeyla, herself, had faced this issue in her own childhood due to her abilities. As a young adult, Tekeyla had received mentoring from Doreen and Charles Virtue and Barb Powell, and she continues her metaphysical studies with Rose “Shuneaj” Sangregorio who is her current mentor.When the archangel Gabriel and the archangel Michael guided Tekeyla to take How to Write For Children and Teens through the Institute of Children’s Literature, she followed their guidance. Shortly after completing her certificate, she was published in R.E.A.L. Canadian Kids Magazine. Then early one morning, the archangel Michael woke her up and showed her several manuscripts which she was to write about the archangels. Bothers: Powers of the Archangel Michael is the first in this children’s collection of stories. These stories are designed to teach both parents and children about the archangels and how they can help them. Tekeyla currently resides in Swift Current, Saskatchewan, Canada. She offers retreats, classes, private consultations, meditations, and a variety of services such as Reiki, Oneness Blessings, and Soul Paintings.For more information you can visit her website at www.tekeyla.ca.
Brent Herbert MacKinnon is a young aspiring artist. He was born and raised in Medicine Hat, Alberta, Canada, where he spent most of his time in the back of classrooms doodling in his notebook. Being the youngest of a large family, Brent learned to draw while watching his brothers play hockey. He is passionate about art in all forms. He loves to draw, paint, write, and act. As a natural channel himself, he was ecstatic when Tekeyla approached him to draw the illustrations for Powers of the Archangel Michael. He has always wanted to do children’s illustrations, and, better yet, this was a metaphysical project. Brent wants to further his art career as an artist and travel the world.