How to Make Good Decisions 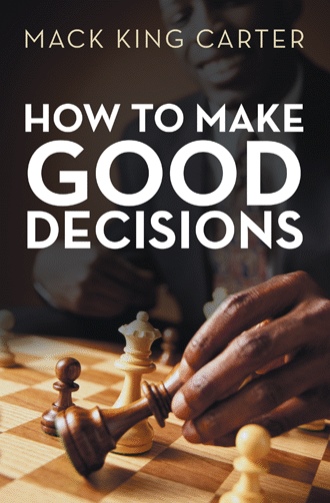 America is fast becoming a brown country rather than a white one. How shall we make it, and what coalitions will be formed among blacks, Asians, progressive whites, women, Latinos, and young people as we move toward the future? Our future demands decisions that are courageous and profound for the salvation of our country now and into the future.
How to Make Good Decisions, by the Rev. Dr. Mack King Carter, draws from biblical examples and other historical illustrations to educate and inspire readers to base their decisions on principles—not emotions or traditions.

The Rev. Dr. Mack King Carter is an internationally renowned prophet, preacher, teacher, author, lecturer, and retired pastor from Ocala, Florida. He holds an associate of arts degree from Central Florida Community College; a bachelor of arts degree from the University of Florida; and a master of divinity degree and doctor of ministry degree from Southern Baptist Theological Seminary. He is also the recipient of honorary doctorate degrees from Bethune Cookman University and Florida Memorial University.
During his forty-seven years in ministry, Dr. Carter mentored the developing leaders who sought his advice about how to make good decisions. For twenty-seven years, Dr. Carter served as the senior pastor of the New Mount Olive Baptist Church of Fort Lauderdale, Florida, where he provided spiritual guidance for 10,500 members. He received the title of pastor emeritus in 2009. Dr. Carter and his wife, Mrs. Patricia A. Thomas Carter, have been married since 1973 and are the proud parents of two daughters and two grandchildren.