Categories of Chinese Literary Theories in the Middle Ancient Age 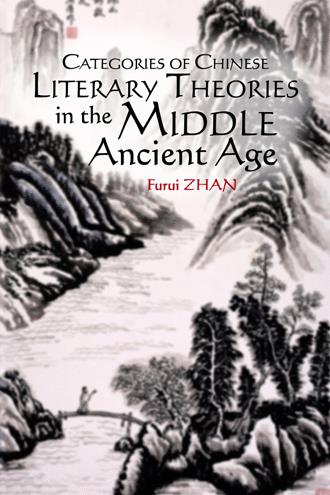 The subject matters of study in this book are the categories of Chinese literature in the Middle Ancient period. The Middle Ancient period is a variably defined span of time. Guo Shaoyu divides the Chinese literature into three periods—Far Ancient, Middle Ancient, and Near Ancient—in his A Critical History of the Chinese Literature, where the Middle Ancient period began from the Jian’an Years and ended with the Five Dynasties (191-959 AD). The historians commonly bracket the dynasties of Wei, Jin, Southern Dynasties, Northern Dynasties, Tang, and Song in the Middle Ancient Period, but sometimes it also includes the two Han dynasties. Liu Shipei argues in his A History of the Chinese Middle Ancient Literature that the Middle Ancient Period actually began from the last years of the Han Dynasty and ended with the Liang Dynasty. His opinion is adopted by other scholars like Wang Yao (1986: 4) who discusses in his A Critical History of the Middle Ancient Literature issues arising from the end of the Han Dynasty to the Liang and Chen dynasties, a period generally referred to as the Eight Dynasties in the past. The concept Middle Ancient as is employed in this book resembles the definition used by Liu Shipei and Wang Yao, which mainly refers to the period extending from the Han Dynasty to the Six Dynasties . “Category” originates from a term in philosophy, which is defined by the dialectical materialists as a form of mental activity reflecting the intrinsic relationship between objective things. It is commonly used to generalize the properties, attributes and relationships of the said things. When it is applied in literary theory, category refers to the generalization or reflection of the nature, property, and the intrinsic relationship of the literary issues proposed by writers and critics. The literary theories in the Middle Ancient period experienced a process of shaping, development, maturity, and prosperity. They were intuitive prior to the Han Dynasty, became self-conscious during the Han Dynasty, and reached its peak in Wei, Jin, and Southern Dynasties, which were known as the Golden Age of literary criticism. A substantial number of concepts and categories were proposed in the period such as shi yan zhi, shi yuan qing, wen zhang, shen si, bi xing, ti xing, feng gu, yin xiu, and tong bian, which were all highly extensive in scope, covering almost every aspect in literature including nature, attribute, composition, form, technique, style and literary development. Some concepts and categories—shi yan zhi, shi yuan qing, wen zhang, and bi xing, shi yan zhi, or “poetry speaks for the mind”—had been proposed prior to the Qin Dynasty and were further developed and perfected in the Middle Ancient period. They were regarded as the earliest guidelines in Chinese poetic criticism. The term was first introduced by the pre-Qin scholars and then perfected in the Han Dynasty. As it evolved, the term gained an ontological sense, its emotional connotation was clarified and its guiding principles of moral propriety and righteousness were discussed thoroughly. Although the concept was first proposed in the pre-Qin period, it was not established until the Han Dynasty. Comparatively, the concept of shi yuan qing, or “poetry derives from the feelings”, was never explicitly proposed and still less generalized as a literary category by the pre-Qin scholars. However, they did have a vague understanding of it as shown by the authors of Shi Jing, or the Book of Poetry and Chu Ci, or the Songs of Chu. The concept was first developed in Mao’s Preface to Poetry, which emphasized the unity of the mind and the feeling. In the post-Han dynasties, it demonstrated the temperament exhibited by the literati and lyricism at the time. Due to its emphasis on individual feelings and neglection of moral propriety and righteousness, it became prevalent in the Six Dynasties. Bi xing, which corresponds roughly to comparison and metaphor and first appeared in the Offices of Spring in the Rites of Zhou, was also a pre-Qin invention. However, the term as was used in the Rites of Zhou seemed to refer to two different styles of poetry. As it evolved in the Middle Ancient times, the term began to refer to two different ways of expression and two artistic categories. As could be seen from these concepts, theoretical categories of literature are products of historical development. They are both stable and volatile, and could be continuously replenished, improved, modified or renewed in the historical process to suit the development and changes of the times and literature. It is quite natural, then, that in the Middle Ancient period, a series of new concepts or categories were proposed, such as shen si, ti xing, wen qi, feng gu, yin xiu, and tong bian. Take shen si for an example. The term was not mentioned in either the pre-Qin period or the Han Dynasty. The first person to employ the two characters of shen si was Cao Zhi in his poem To My Precious Sword. Hua He, an official of Wu, also used the same characters in A Plea to Grant Amnesty to Lou Xuan. In a later period, Liu Xie borrowed the concept to generalize artistic imagination, making it one of the most creative theoretical categories of literature in the Middle Ancient period.

The book highlights the categories of Chinese literary theories in the Middle Ancient period, such as the mind and feeling theories, literary endowment, literary style, literary change, and trueness to the spirit, shedding new light on the ancient Chinese literature research.

Furui ZHAN (1953— ), the former director of the National Library of China and deputy director of the Academy of Chinese Ancient Literary Theories, currently presides over the School of Chinese Language and Literature at Beijing Foreign Studies University.