And the Angels Speak 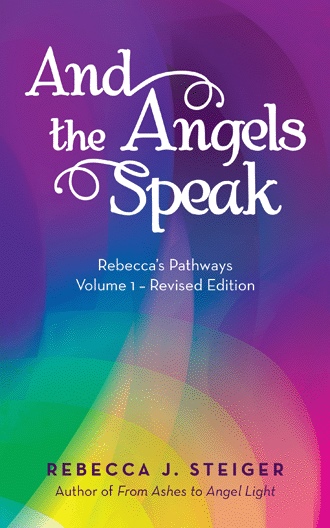 Being the intuitive person that I am, I had always known that I was going to write a book. Entirely different from this one, it was going to tell everything about everyone I knew, more like a “soap opera” type of thing!

I traveled a lot back then, had lots of sex and smut stories on everybody I was around. However, to my surprise, Spirit picked me up out of my box, shook me up a little and dropped me to the ground. I started writing alright, about something I knew absolutely nothing about!

In 1993, I was in a tornado with my four year-old grandson, who clung to my chest. We were blown out of a house, landing in a field under a satellite dish! During this time, I was either knocked out or blacked out and stood before God (the Supreme Being) and his judgment. My sister-in-law, who had previously passed on, was leaning over shoulder and said; “Not now Lord; for she still has many things to do.”

I went around, wondering what it was that I was supposed or meant to do. I was afraid that, at any time, God might decide that I was not doing things right and take me home. Now, I know. What I had thought was the worst and scariest thing that ever happened to me actually was the best! Giving me many gifts and blessings!

Shortly after the tornado, my grandson would talk about our Guardian Angels. “You know, he would say the ones we saw during the Tornado”. I would agree with him and go on. Never realizing that he too could and did see Angels.

One day when I was driving with a friend down a gravel road, by the cemetery where my grandfather is buried, I suddenly saw this huge Angel standing in the middle of the road. His purple robe and giant wings were a sight to see. I asked him who he was; and he said “Cervihel”, my Guardian Angel. Okay, now I was thinking first that “I have never heard of Cervihel” and second “Am I going totally crazy?”

When I got home, I called my neighbor, Patti; she had a lot of Angel books, and she couldn’t find him in any of them. So, she finally went on the internet and looked him up. He, of course was there. Cervihel, is an Angel of strength! He helped David slay Goliath.

Then, I started seeing Angels everywhere, literally all over the place, around other people, in the sky, trees, and fields. What a wonderful gift I was given!

One day, I was in the bathtub; and the Angels blasted me with information, telling me things I’d never thought about before. Two hours later, I was able to get out of the bath. I started writing; and when I’d write, they’d talk faster. It really was hard, at times, to keep up. They had so much to tell me and they had waited until I was ready to receive this information.

Then, I not only discovered my Angels, but I could tell others who their Angels and guides are. Angels are giving me information about troubles in someone’s life that had kept them from moving forward on their paths. I have never been wrong when I channel for others.

One day, when I was channeling for a girl I had just met, I saw her deceased mother over her right shoulder. I described her mother to her; and sure enough, she appeared as when she was the happiest in her Earthly life. She had a message for her daughter; and I gave the message to her. To my surprise, she knew exactly what it was! Then, the channel of crossing over was opened.

Someone asked me what I thought about meditation, that I should learn to meditate. I walked outside and saw a Rainbow; it was bright and beautiful. The next thing I knew, I was doing a guided meditation for others; helping keep the balance and giving them positive direction in their lives. All done by clearing my mind and asking the Angels to help. So now I not only meditate, but also do guided meditation to help others.

Ever since I was in the tornado, I had healing energy in my hands; and everyone would say, “Oh, so you do Reiki?” My answer was “No, I Don’t.” I knew what Reiki was; because my neighbor and friend Patti is a Reiki Master, and so is her sister Mary Lou.

Then I was working one day for a chiropractor and had a patient come in with some severe problems; and they called me to the back to an exam room to do some energy work on him. I did not know this man of many gifts was a Reiki Master. After he came to the window to pay his bill, he asked me how long I’d been doing Reiki. We then had a discussion and he (who is now a dear friend) gave me my Reiki I and II attunements. What a wonderful gift that was. Opening more channels of health for others! I also began to get more information for my clients as I worked on them. I could actually see what organs were blocked, where trouble was on their path, and so being able to be of more help to them and their healing process.

I still receive and heal others through Reiki; I firmly believe in the energy work. One day when Patti was doing Reiki on me, I received my master’s attunement through Jesus. Who better to attune you! When I got off the table and told Patti of my experience, she agreed that now was the time for me to complete my master’s. I am now a Reiki Master, using the energy every day to help others.

Well, I thought that I had opened all that there was to open. Wrong! I then started seeing the ascended masters and print in very small letters being filed into my mind. As crazy as this sounds, this book is the Angels’ gift to you. Spirit sent me back to write this work, channeled from Spirit through me for you.

And the Angels Speak is about the journey or truth in spiritual reality. This book is to help others like you find your divine mission, spiritual opening, and to let you know you are here for a higher purpose.
And the Angels Speak can help you get in touch with your higher spiritual self in a positive and enlightening manner, proving that miracles do happen every day.

Rebecca’s journey into the angelic realm began in 1993, when her life was transformed in an instant, through the most horrid experience ever, a tornado. Rebecca and her grandson were blown out of a house and into a field under a satellite dish. At that time, she saw herself standing before God and his judgment. Her sister-in-law, who had previously passed away, was leaning over God’s shoulder and said, “Not now, Lord; for she still has many things to do.”
After that event, Rebecca slowly came to learn of the gifts God had given her and why she was returned to this earth. Rebecca not only helps others through the angelic realm but is also a Reiki master, through which she uses her God-given gifts to heal others.
Rebecca is also a talk show host and an inspirational lecturer. She also performs workshops and lectures on the healing of the mind, body, and spirit and gives seminars on stress relief for public or corporate events.
Rebecca is a twice-published author. Her first book, And the Angels Spoke, was originally published in 2005 and republished as a revised edition in 2013. Her second book, From Ashes to Angel Light, was published in 2006.
In her private time, Rebecca leads an active life with her two children, Amy and Andy, and five grandchildren, Clay, Kinzie, Montana, Abby, and Cole.