Flower in the Snow—Helen’s Story

by Leslie A Thomas 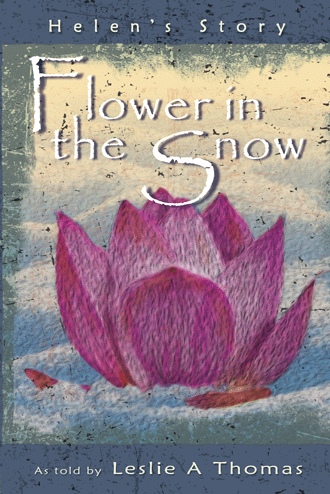 Life is about moving. Moving me from one house to another to another.

So I was moving again and went to go live with my oldest sister. She was married and had twin sons named Nathan and Nicolas. We traveled two or three days, and we had to take a boat to get to her house. It was really good at first, but she seemed to start having problems with her husband. They fought all the time, but because I was so young, I had no idea of what they were fighting about. One day she was so mad at her husband that she turned around and hit me. She hurt me very badly. She hit me with a belt, and I had cuts and bruises all over my body. I remember that I had more cuts and bruises on my bottom than anywhere else. I was really confused, because this was my sister! I really didn’t understand what was going on. I just thought that she didn’t love me anymore.
So in the middle of the night, I got up out of my bed, tiptoed out of the house, and just left. I just walked away in the dark and escaped from this place that didn’t really feel like my home. I walked and walked. I had no idea where I was going, or what I should do. I just kept walking and walking all night long. Maybe my mother helped me along the way, I don’t know. I walked all the way to Nha Trang. I didn’t think about how far I had to go, I didn’t think about the fact that I had no idea where I was or where I was going. I didn’t think about any of that. I just kept telling myself that I needed to walk for two days and one night, and then I would be able to cross the ocean to go back home. I was too young to think ahead, to think about what was ahead of me. I just knew that I had to get out of that house, away from my sister, and I needed to just keep walking. I didn’t think about bringing any extra clothes with me, or even any food or water.
The next morning I was exhausted, thirsty, and hungry. I walked around town looking for something to eat and drink. I was going down the middle of a street, and I found a piece of food that somebody had dropped. I could tell that it was dirty, but I picked it up and put in my mouth. I don’t remember what it was that I ate, but I do remember that it tasted rotten and spoiled. I really needed to drink some water, so I looked around and discovered a hole in the sidewalk. There was water in the hole. I have no idea if it was rainwater, or maybe urine from a cow or other animal, but it looked like water. I just had to drink it. I don’t remember what it tasted like, if it was good, or if it were spoiled. I do remember that it didn’t smell good. I was so hungry and thirsty at that time, that I just knew it was food and something to drink.
So after I ate and drank, I decided to keep walking. I walked along, pretending to know where I was going. I just kept doing my own thing. I was so tired. I finally saw a house that had guava trees. I had guava trees at home, so I went up to the house and asked the person inside how long it would be until I reached the ocean. She told me that I was too young to be by myself and that I had no idea what I was doing. She asked me where my family was. I simply told her that I had to get to the ocean and that there was a boat that would take me to the other side. I insisted on telling her this, and I stayed strong. Unbelievably, I finally convinced her that if I could find the ocean, I would know where my house was. I had no idea, but I just had to make her believe me. She finally believed me and told me that she would help me.

Leslie Thomas journals the difficult life journey of Helen, from a small child to adulthood. Helen’s compelling story can help you realize why it is important to stay positive in life and seeks to remind you to be ever grateful in your endeavors.

Leslie Thomas is currently a middle school reading teacher. She lives in Houston, Texas, with her husband and daughter. She believes that her writing of this book is in part due to divine intervention.