Laughing Your Way to Loving Yourself 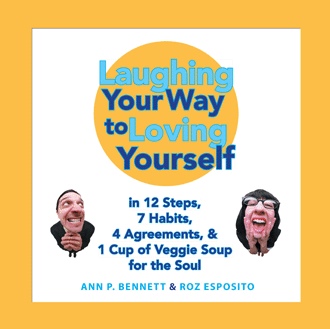 12 STEPS STEP 1. ADMITTED WE WERE POWERLESS OVER THE WAY WE ARE AND THAT OUR LIVES HAD BECOME UNIMAGINABLE When kids play together, you hear them say things like, “I like that!” Or “No I don’t want to!” They are very clear about how they feel. And in their imaginations, they can have, do or be anything. Is that true for you? Has your imagination so atrophied that you find yourself stuck somewhere between unhappy and miserable? Before you run for the nearest pound cake, credit card or martini, please take note of what Ann’s cousin Marvin from Poughkeepsie said: “I couldn’t get out of bed until I imagined myself standing up. I’m a new man now.” 7 HABITS FOR BEING HUMAN FOUR: GIVE UP NEEDING TO KNOW This only causes stress, and anyway, there’s usually a very willing Know-It-All close by who will be more than happy to help you by pretending they know. That will relieve the stress – at least for a while. 4 AGREEMENTS SECOND AGREEMENT: Don’t take anything seriously It is widely known that the great Indian mystic, Meher Baba, once said, “Don’t worry, be happy.” Upon further investigation, we discovered that he maintained a vow of silence and communicated with unique hand gestures. Is it possible that one of these hand gestures was misinterpreted, or is this actually do-able?

Ann and Roz have been laughing at themselves and each other, for quite some time—lovingly, of course. In this book, you will discover there is no problem too big to be laughed at and no situation too great to be mocked. This book is meant to have us laughing at all the paths we’ve taken in our insatiable search for perfection. Visit them online at http://www.laughingyourwaytoloveingyourself.com. “Enlighten up with this delightful scripture that bridges the gap between heaven and mirth, teaching us that spiritual practice essentials include a hefty dose of humor, especially about ourselves.” —Michael Bernard Beckwith, author of Life Visioning “A light-hearted spiritual journey that will awaken your sense of self, while arousing your sense of humor!” —Andrea Meyerson, Director/Producer/Documentarian for Film and Television “This little book packs a powerful wallop! The wit and humor will have you laughing as you begin to see things from a new perspective. You’ll stop taking yourself so seriously, and change your mind-set from stress to success!” —Barbara Niven, actress, CEO of Unleash Your Star Power “If you read the book from cover to cover, you’ll be left with ZERO concerns, as Ann and Roz make even the hardest day of our worldly concerns a little lighter with laughter!” —Jacquie Jordan, CEO of TVGuestpert

Roz Esposito is a licensed Science of Mind Practitioner, student of Rev. Dr. Michael Beckwith who was featured in The Secret, and a protégé of Louise Hay. Through her workshops and public speaking, Roz teaches people to move beyond what they think they can be or do. She herself has completed 3 Los Angeles marathons, along with being an award-winning songwriter, a documentary film producer, and a performing stand up comic. She is currently penning a musical bound for Broadway. Roz is a New York escapee currently living in Southern CA by the ocean with her spiritual teacher Cha Cha – a 7-pound four-legged, Yoda look-alike.
Ann Bennett is the founder of Ann Bennett Marketing, a speaker, coach, and creator of the 7-Step Irresistible Marketing and Mindset System. Ann uses her marketing and branding genius to help women entrepreneurs expand their confidence, clarity, and cash flow. She is also an award-winning art director, having worked for major publications including Vogue (where the devil really does wear Prada!). Ann’s personal slogan and the cornerstone of all her programs is, “It’s smart to fit in…but it’s brilliant to stand out.” Ann, after living 25-years in New York City in a small dark box, has returned to the land of sunshine and currently resides in Newport Beach near her first love – the ocean.

As if all that wasn’t enough…this innovative and edgy duo produced the first Gay and Lesbian Business and Cultural Expo in New York City in 1994 - OUT LOUD (way before Wil and Grace). Currently, Roz and Ann are working on several other books. As a team, they have generally pushed people to the brink of personal evolution – like it or not!