Satnav for Your Soul

Guidance from Those Who Have Made the Ultimate Journey 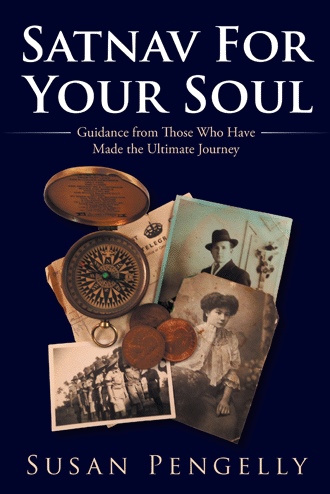 “Can I tell you what it was like for me?” he asked.
I was sat there, in my lounge, reading a spiritual book about death—not that I’m a morbid sort, but I have always had an interest in life after death. I’ve experienced so much of it, it’s hard not to. When I realised I’d read the same page twice without inwardly digesting a single word of it, I became aware that a male presence was trying to distract me. Knowing from experience that when a spirit person is trying to get through its pointless trying to ignore them, I said a hello and asked what he wanted. Immediately I felt my communication with him become as clear as if he were sat next to me. Which in a way, he was.
“What what was like?” I replied.
“My death.” he said. “Can I tell you what my death was like for me?”
“Sure,” I said, “hang on a minute while I find a pen and paper.” Then I began to write everything, word for word, that was said to me.
Mark had taken advantage of the fact that I was quietly reading, to communicate with me. People in spirit form have a habit of doing this, as any medium worth their salt will tell you. People in spirit form have a habit of waiting until you have a quiet moment, then they’re in like flint—often just as you are trying to doze off after a hard day or, as is frequently the case with me, when I’m cooking or reading. This is because in the doing of a simple task, you are operating on automatic pilot and your consciousness is easily influenced.
Mark told me that lots of others were waiting to tell me their stories too. I asked him what everyone wanted done with their stories.
“Use them,” he said. “Use them to help remove the fear of death. So many people are living in fear of their own death, of what it will be like. Will it be painful? Is there really anything after death? We want to help them. We want to let them know that it’s not the end, oh no, far from it,” he said laughing, “far, far from it.”
And he was right. So far to date over one hundred and fifty people from all walks of life have told me, in their own words, what their death was like for them. It was an honour that they should do so.

To maintain their authenticity and character I have written the monologues exactly as I heard them. Trying to replicate speech patterns was not always easy, but I hope that you are able to gain a flavour of their character with the reading of their story.

These are real people’s stories, because that’s what spirit people are—people. Not ghosts, nor entities nor any other names that the less well informed have given them in order to make it all sound spooky and frightening. They are people. People who have lived and loved like you do now, just no longer hampered by a physical body; that’s all.

There are many books available on what people perceive death to be like, but most of them are written from the opinion of the author, and let’s face it, we won’t know for sure until we go ourselves. But this book—this book is a series of first-hand accounts from people who have made that journey, and want to give you the heads up, so think of it as a Satnav For Your Soul.

You can dip into it when you feel the need, or read from cover to cover. Some accounts are very funny because the people’s personality come shining through—their love and compassion and sheer downright caring comes shining through. There will be stories that touch you deeply because they strike a chord with you. Take comfort from that, because that, my friend, is the whole reason behind writing it. In my experience, the people we love, who are just a little further along the path, are watching over us, cheering us on and loving us still... what could possibly be wrong about that? It’s love. Love is the greatest driving force behind everything we do. It carries us forward and will, eventually, carry us home.
When I look back at the hundreds of experiences I have had, I realise how blessed I am and how Satnav For Your Soul is another step along that path. I hope you enjoy all the stories as much as I have enjoyed hearing them and writing them down for you. I hope that they, in some way play a small part in making your departure from this physical life a little less daunting.
If they do, then it has been an honour.

I will leave you now in the loving hands of the people who made all this possible. Of course, it is only right and proper to begin with Mark’s story.

Have you ever wondered

In Satnav for Your Soul, experienced medium Susan Pengelly shares with you her encounters with people who have died and who wished to remove the fear of death for those who are yet to leave their physical body.

Satnav for Your Soul is a travel guide from people who have got there ahead of you, who know the pitfalls to avoid and the road best travelled so that your journey is much easier and so that those who are waiting to meet you are pleased to see you and not wondering why you’re dragging your heels—which you’re doing because you sold your grandmother’s ring after she died and you are not sure if she knows (she knows).

If you love to laugh, to be moved, to learn something from the experiences of others—then you can do no better than to curl up on the sofa and let Satnav for Your Soul provide the map and compass for your own enlightening ultimate journey.

Susan Pengelly lives in Devon, England. She teaches mediumship and meditation mind work, and her mission is to allay peoples’ fears of contact with deceased people, dispelling myths and preconceived ideas along the way. Her powerful and inspiring spiritual teaching style evokes your true, wide-awake, sparkly self.