The Only Guide You Will Ever Need to Making Love Last 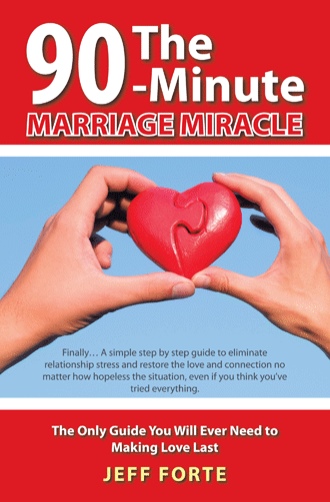 After the first 5 years with my wife, I began to think about the future of our relationship. I started considering the possibility that another level of success existed for me in terms of closeness, connection, and shared passion for each other. Was it possible?
People say that marriage happiness peaks in the first few years, and then everything starts to decline. I didn’t believe that to be true, so I began to think of my marriage like most other things in my life…as a work in progress, something that I was creating.
How did I want it to ultimately be? I began to ask myself, what was the most amazing relationship I could imagine, and what would that look like?
We all get to decide what standard is acceptable in our lives. I wanted to have something extraordinary with my wife so I began to work towards making it happen.
Some people say that everything in life seems to be either growing or dying. Nothing is ever staying the same. A relationship is no different than anything else in that sense. Your relationship is either growing in love or losing love. The connection is either deepening over time, or it’s beginning to sever. Your passion for each other is elevating or it’s evaporating.
It wasn’t enough for me to coast on how well things were going and to imagine that the relationship was on auto pilot. The relationship wasn’t going to just magically take care of itself and everything would be perfectly fine. Business doesn’t work that way. If you don’t work to grow a business, it will naturally decline and ultimately fail. If you don’t weed your garden, the weeds will take over eventually. If you don’t maintain your car and home they will fall apart.
Effort is required in order to sustain anything at a constant level. Relationships are no different.
Even if I wanted to keep my marriage at a consistent level of really good, that meant I’d better do something about it all the time. On its own merits it would tend to decline naturally without a conscious effort to make it better. If I wasn’t doing something intentionally to make it great, I was actually neglecting the relationship, and I would suffer the consequences of that neglect.
That was an eye opening realization for me. The consequences of what I call benign neglect are what I see in most couples today.
This benign neglect is another form of taking each other and the relationship for granted. You don’t intend to have the connection between you and your partner drift slowly apart but that’s what happens without any real effort to do something about it. No one intends to lose passion for their partner, but that’s the result when people expect to just live happily ever after. Are you preoccupied with your busy life putting your partner and the relationship someplace at the bottom of your to do list?
You can change it all right now.

Finally, learn what really works and doesn’t work to create lasting love in your relationship. This breakthrough guide eliminates all the guesswork and shows you easy solutions to fix your marriage forever. Discover for yourself the key strategies to resolve any relationship challenge quickly. Imagine your peace of mind when you finally understand how to communicate with your partner. Most people will never be happy until they get the relationship part of their lives right. This book can help you get it right.

Jeff Forte, founder of PEAK Results Coaching, is an executive and peak performance coach specializing in team and relationship dynamics. He holds certifications in marriage education and strategic intervention. This book is based on the time tested, results-focused relationship strategies that he uses daily with private clients and in his own marriage. Jeff’s clients include Fortune 500 executives, business professionals, attorneys, surgeons, professional athletes and couples. He lives in Connecticut with his wife and son.