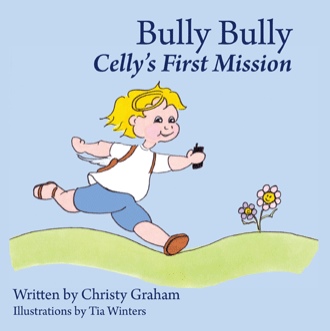 Celly's First Mission
The Bully
FIRST CHAPTER
Celly sat in his favourite place by the edge of the Crystal Pool where he could see the waterfall tumbling into its sparkling waters. The sun cast diamond glints that shone forth in all the colours of the rainbow making this the most magical of all places. Celly dibbled his toes in the crystal clear water. They looked like little fish darting this way and that. He yanked off his shirt and left it on the rocky ledge. With one quick motion, he was swimming beneath the surface playing with the beautiful fish who were his friends. Just as he came up for air, he heard a noise.
“Da-da-da- DAH!” It was his ‘celly phone’ with that special ring tone that told him he must go directly to the Galaxy Control Centre! “Oh pook!” he said, and hoisted himself up to his little ledge.
Celly got dressed quickly because he knew the Majestical One didn’t like to be kept waiting. He snatched up his phone and began to sprint across the lush, green meadow that felt like velvet beneath his flying feet. The daisies bowed their little heads as if to say, “Hello there, Celly. Don’t be late!”
Celly finally entered the Great Mist. There was something about the Great Mist that Celly had never been able to understand. Why was it there when the sun was always shining? Still, he kept going until the veils of mist parted to expose the awesome sight before him.
There stood the Galaxy Control Centre. As the bright sun struck its crystal walls, rainbows danced off in all directions. At the very centre of the magnificent building shone a white light so bright that it blinded Celly for a moment. Still, he kept walking while his heart thumped inside his little chest. “Hello, Celeste,” came the golden tones of the Majestical One.
‘Celeste!’ How he hated that name! It was meant for a girl or a sissy. He was neither. HE much preferred being called Celly but he didn’t dare tell HER that!
“Celeste,” she was saying. The time has come for you to go on your very first mission. Go now to the Grand Hall and await my instructions.
”Y-y-y-yes,” stammered Celly , as his chubby little hand darted to his forehead to push back his halo that was forever falling over his right eye.


LAST CHAPTER
Whoosh! Celly's feet made a soft, swishy sound as he landed back on his ledge by the Crystal Pool.
“Nice landing,” he said out loud. “Much better than the one on planet earth. I'm getting better at this!”
He peered at himself in the pool of mirrors. He was still wearing his bee shirt. Come to think of it, he had begun to like these earthling clothes. Maybe, just maybe, the Majestical One might let him keep his new clothes. After all, he had accomplished his mission and then some! He felt a warm glow inside.
“Yes,” he decided. “I bet she will!”
Maybe she would send him on another mission. He would get more awesome clothes. Before long, he'd have a whole new wardrobe! Not bad for a few day's work!
He placed his backpack beneath his head and lay down to think about his very first mission.
It made him feel very powerful to know that even though he was afraid, he was able to do amazing things. He imagined that he had helped Bobby to feel the same way.
He had even helped Mikey. The Majestical One hadn't exactly asked him to do that, but it felt right somehow. He figured the Majestical One should be pretty happy because he gave her a real deal – two for one!
But even more important than what the Majestical One might say was how he felt about himself. GOOD! REALLY, REALLY GOOD! He had learned to believe in himself and that's what mattered to him the most!
He knew by the big smiles on Mikey and Bobby's faces that they felt good about themselves too. That really made Celly feel great. He would never forget his first mission. He would never forget Bobby, either.
“All right, Celly!” he said, “Be happy!” and with a contented smile, dove into the Crystal Pool.

This is a book about bullying. On a deeper level, it is a book about self-empowerment. It is a book about believing in yourself. You might say there are actually three heroes in this book. There is Celly, the little angel who is sent to earth on his first mission. There is Bobby, the boy being bullied. And there is, believe it or not, a third hero: the bully himself. Each one becomes a hero in his own right as each discovers what he needs to learn. Bobby learns some strategies to help him deal with the bully. He also learns to claim the power he has inside and to never give it away to anyone or anything out there. Mikey, the bully, learns what it feels like to be in Bobby’s shoes. And Celly learns more about himself too. All of these boys learn the wonderful lesson of feeling good about themselves, believing in themselves, and knowing that things really can change if one believes they can. They learn that they can move through their fears and find their own freedom and happiness. What an invaluable lesson for us all whatever our age may be!

The author, a retired elementary teacher specializing in music and drama, knows about bullying behaviour. She was known to her students as ‘the teacher who made us feel good about ourselves’. Christy lives near Toronto and spends her time singing, songwriting, volunteering, painting, and connecting with her family and friends.