Book One of the Stone Bearer Series 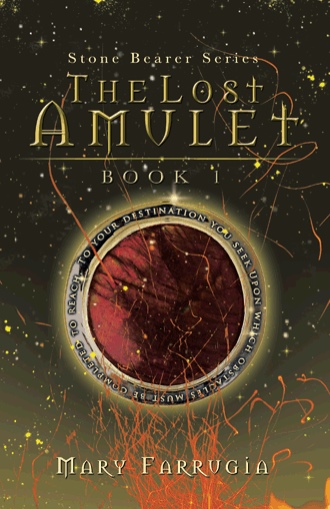 Blue mist engulfed the centre of Pine Dilley Forest and out of the ground sprang a sparkling ocean blue door. Twirling in mid-air, it slowly drifted towards the ground. The door had no wall or hinges supporting it, yet it could magically hold its centre of balance.

The turquoise door knob began to turn and the door creaked ajar. Out from the door appeared a lanky woman wearing a purple cloak. Behind her, out popped a scraggly girl, no older than fifteen. She wore rumpled clothes underneath her own mahogany colored cloak. In her petite hands, the young girl carried with great caution a basket which seemed to be filled with bundles of clothes. The old woman removed her hood and bent down to look straight into the girl’s green eyes.

“Keep them safe; keep them hidden, Marina. The fate of our world rests in your hands. You must not let Colt get his hands on them,” the old woman said sternly.

“I promise, my lady, you don’t have to worry. You can count on me,” Marina said and nodded in reply.

“Remember, you have the length of three thorns before the gateway closes. Follow your instructions, Marina, and hurry.” Marina stood there and just nodded at her mistress.

The old woman furrowed her brow. “Well, what are you waiting for? There is no time to lose. Make haste.”

Instantly, Marina dashed into the pine trees to find the closest exit out of Pine Dilley Forest.

Clutching her cloak, the old woman turned to face the sparkling ocean blue door. She mumbled, “I hope we have made the right choice—for the sake of this world and ours.” She donned her hood again and with the hem of her purple cloak sweeping behind her, she vanished into the existence that lay behind the blue door.

Marina ran onto the cobbled path that followed the pine surroundings of the park. The park’s path was stenciled like the number eight with an entry point at the top and at the bottom of the eight. When the pathway reached one of the far end entrances, which was across the main road of Crumple Street, Marina ran towards the road.

Whilst Marina was crossing the road, two light beams shone brightly into her eyes. A tumultuous beep droned out of the vehicle until it came to a complete halt. Marina saw the driver wave his fist at her. She trembled, tightened her grasp around the basket’s handle and slowly backed away from the vehicle. Marina waited until the car had driven off before she turned and ran to the other side of the road. Sweat began to build on her brow. She felt that time was ticking faster than usual and so she hurried. She kept running for two blocks and turned left into a deserted arcade known as Riverwell.

Riverwell seemed like an endless dark tunnel. Marina feared that the arcade would be a dead end and that she may not reach her destination in time. She scrunched up her face to muster as much courage as possible before she bounded into the arcade. Once she reached the end of the walkway, she let out a huge sigh of relief.

The walkway connected to a path that led to some residential buildings. Marina kept running until she reached her destination, the city council district of Rivington.

Marina crept up the stairs and laid the basket upon the last step where there were already two others. She had no time to linger as one and a quarter thorns had passed. However, she was determined to keep her promise to her lady.

She knocked on the door and was relieved when she distinctly heard a girl’s voice coming from inside the council district building.

Inside the building, the girl was walking towards the entrance as Marina banged on the door. She stopped in front of the security guard.

George was slouched on his swivel chair, hat lopsided and feet crossed on top of his desk.

“Yes, good night, Jana,” he murmured. He did not look up from his Ultimate Cars magazine because he was too enthralled.

Flicking her dark brown hair behind her shoulders, Jana clunked her way, in her high heel shoes, towards the front entrance to then walk home. She was a slender sixteen-year-old who was trying to impress the senior delegate of Rivington during her work experience. She had agreed to cover the late shift when the assistant called in sick.

Jana pulled the front door open to step outside. But the sight of three baskets transformed her mouth from a grin to a gaping hole. Marina placed her finger to her lips.

The door slowly closed behind Jana as she stood for a moment in complete stillness to comprehend what was in front of her. She warily lowered her shoulder bag beside her. Anxiety churned within her as she bent over to take a closer look at what was inside the baskets.

She saw three little faces goggling back at her. Jana caressed the cheek of a wide-eyed baby girl with bristling brown hair. She then stroked the cheek of another girl with a dark complexion. The baby lulled dreamily, as she rubbed her brown eyes and sucked her thumb. The last baby, a little boy, thumped his clenched fists and jerked his feet in the air to gain Jana’s attention. She stared into his big, deep blue eyes and caressed his bristly ginger hair.

Marina fell to her knees.

“Please help me,” she pleaded.

Jana shook her head. “What on earth is going on?”

“Please believe me, these babies are loved but are in danger.” Marina covered her face with her hands as she was on the verge of crying.

“Please protect them from the evil that seeks to harm them.”

“How can I protect them?”

“Never leave them out of your sight.”

Marina gave a sigh of relief, thanked Jana and dashed back to Pine Dilley Forest.

Jana alerted George, and the authorities were quickly notified. Jana had no information to provide them apart from her encounter with Marina.

The babies appeared to have no relation to one another except for a tattoo of two alphabet letters, one uppercase and the other lowercase which had been inked on their right shoulder.

Four gifted children from the Land of Four Stones are all that stand between life on Earth and oblivion. Colt and his minions have entered our realm, Earth, to find the lost Amulet – the key to ultimate power and destruction. In an effort to save both worlds, the leaders of the Land of Four Stones have hidden the children on Earth since infancy until they are ready to fulfill their purpose. </p>

Known as the Stone Bearers, the children are raised as humans until the day they are told of their true identities, their responsibility and their destiny as champions of Earth. Bestowed with their magical wands, the Stone Bearers learn of their latent powers; and as they train to gain the confidence they need to wield their magic against their adversaries, the Stone Bearers search for the lost Amulet. The Stone Bearers must find the Amulet to save the world from Colt. The race is on. Who will find the precious Amulet first? </p>

Mary Farrugia’s love of fantasy stories inspired her to write her own. She currently lives in Australia.