Reflections of Growing Up in Indiana’s City of Firsts 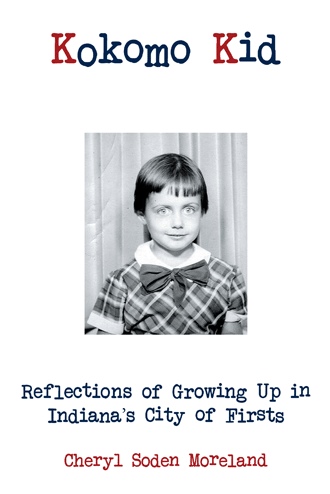 Rumors have been swirling since I escaped from my mother’s womb about when and why I became a Kokomo kid in The City of Firsts when I happened to draw my first breath in The Capital City. If ever I do learn the truth, the whole truth, and nothing but, perhaps that might be yet another book for me to write. But until then, and in spite of the unknown, I will take heart in the general consensus of family and close family friends that I was “taken to raise” by my grandparents (a phrase they adopted, if not me) at around six months of age. After years of hearing the stories my grandfather liked to repeat to me and to anyone else who would listen about the cute and not-so -cute things I did as a baby and toddler in his and Grandma’s committed care, I feel pretty confident that those who came before me knew what they were talking about when it came to my history, and there were many who made up this entourage of loved ones.

My grandparents raised about a dozen children of their own, with Gramps having had about a half dozen babies with his first wife while Grandma had about the same with her first husband. Combined, they because The Brady Bunch times two. Once those kids were grown and out the door, I came along, making me perhaps Number 13. Not necessarily a favorite number for many, but as it turned out, I felt pretty good being the last in a long line of much older aunts and uncles, half not even “blood” related but I felt as if we had been born of the same mother, with them being more like siblings to me as they often treated me like their little sister, and many times I even felt like one of their own children. At Christmas I excitedly yet embarrassingly got more gifts than anyone. My birthdays were huge celebrations with the kids of my grandparents’ kids in attendance at my parties as well as my own siblings, friends, and classmates during my grade school years.

I may sound as if I was spoiled. Perhaps. I felt like I was at times. I’ve heard others enviously say that I was. Yet I never felt I lived the princess life. Far from it. Nothing came that easy for me. And sometimes I solemnly believe that through the years, the negatives were certainly greater than the positives, especially when I compared myself to others (which no one should ever do). Outsiders may not have perceived my life that way, but then I kept most of the bad stuff to myself out of fear of repercussions from exposure. I decided early on to take advantage of the bushels of lemons at my service and make lots of lemonade, preferring to enlighten and embrace those loving and joyous moments instead of dwelling on the darker, hurtful ones. I carved out my own little happy hole in a corner to dwell in, mentally and emotionally, and by all means, spiritually. Having shared that, I have still felt very blessed, nevertheless, and very grateful for what I’ve had. In abundance. I learned early on to hold tight to what was pure, to let go of what was not, and to forgive and forgive and forgive those who may soil my soul, or try to.

My grandparents fell into the pure category. Not that they were perfect, though, but what parents or guardians are? I discovered that if we as children don’t find flaws in them as we are growing up, perhaps someday we’ll look back and perceive them differently, a little stained, through our adult eyes. If we do, then we’ll see ourselves in them, and we’ll forgive them, for we’d hope to be forgiven, too, by our own children. 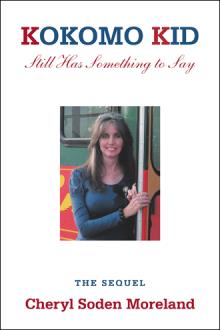 KOKOMO KID Still Has Something to Say
Cheryl Soden Moreland
£17.95

Kokomo Kid is about more than just growing up in a medium-sized Indiana city, where factories flourished and neighbors were actually neighborly. It’s about the human dynamic and how our past forms and sometimes even predicts our future, whether we like it or not. It is what we do with those feelings and memories rising from good and bad moments that defines our character as we meander toward our golden years. This simple and sincere book is a sentimental journey to a time of innocence, love, and lost loves—a nostalgic, introspective, inspiring peek into the diary of the atypical childhood of a midwestern gal.

Cheryl Soden Moreland is a born-and-bred Hoosier, actually growing up simultaneously in two Indiana cities—Kokomo and Indianapolis—having been raised by her mother’s parents almost since birth; living and going to school in Kokomo during weekdays; and visiting parents and siblings in Indianapolis on weekends, during school breaks, and holidays. This non-traditional upbringing resulted in a diverse, anything-but-dull lifestyle, causing pendulum-swinging emotions as she had to conform to strict grandparents and then to indulgent parents and back again on a regular basis. Cheryl had to be two kids in one, which has ultimately lent itself to creating someone who can easily see and appreciate two sides to every story and who possesses a better understanding of and a heart for kids who dwell in an environment of uncertainty and insecurity.