The Treasure That Came into the World to Find Its Self. 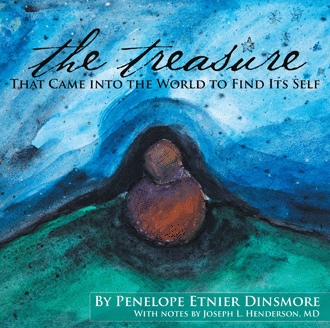 “Penelope Etnier Dinsmore has been laboring in the vineyards of becoming herself—what we Jungians call individuation—for more than fifty years. This wonderful book is one of the many fruits of that labor, which also include many glorious paintings. I have always admired her multi-talented creations as I have admired her for being such a beautiful woman who has struggled mightily to find her own, very unique way. The Treasure That Came into the World to Find Its Self is a testament to the strength and grace of the human spirit.” —Thomas Singer, MD, Jungian analyst “A secret is hidden in these pages. In order to find it, you will need to enter into its pages, enter into the shapes and colors and words and let them become the world you inhabit … So curl up in your favorite chair and take your time, because this is an adventure that is too wonderful to rush!” —Dyane Sherwood, PhD, from the Foreword “Through vivid images, this gentle and powerful book tells the story of a woman’s journey in becoming her true self, the treasure we all seek.” —Tina Stromsted, PhD, from the Afterword

Author and artist Penelope Etnier Dinsmore was born in Portland, Maine, in 1929. She attended Vassar College for three years, and graduated with honors from the San Francisco Art Institute in 1968. She was represented for many years by the San Francisco Museum of Art Gallery, and her work is in private collections throughout the United States. She traveled to France to see the cave paintings there, including Lascaux, before it was closed permanently. Her work, oil paint on paper and canvas, is usually abstract, but the effect of the caves was profound, and the animals became a meaningful part of her life and her paintings.
The work Penelope has done with dreams and Jungian analysis has been central to her painting concerns. The spiritual in art, the inner and the mysterious unknown, are what she finds most significant. She served on the Board of Directors of the national Archive for Research in Archetypal Symbolism (ARAS), an encyclopedic collection of archetypal images from all times and all places.

Dyane Neilson Sherwood, PhD, is a Jungian psychoanalyst who practices in Oberlin, Ohio. She co-authored with the late Joseph L. Henderson, M.D., Transformation of the Psyche: The Symbolic Alchemy of the Splendor Solis (2003).
Tina Stromsted, Ph.D., MFT, BC-DMT is a Jungian analyst and Board certified Dance/Movement therapist in private practice in San Francisco. She teaches internationally and was the co-founder of the Authentic Movement Institute in Berkeley. Her work explores the integration of body, psyche and soul in healing and transformation.