Why Am I So Angry?

My Search for the Truth 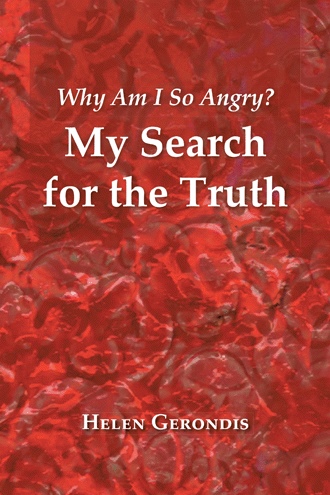 found shameful feelings of failure and considerable anger over loss of my dreams.

In my attempt to help the child Helen to “grow up” I have looked back on why I am so angry and have found that underneath what I thought was anger was a feeling of being hurt or of feeling excluded because I felt different.

What seemed so important at the time has now become less important and I need to put it all behind me and forgive and forget most of it.

I have read and re-read the report from the good psychologist and I feel I have changed my belief system and am no longer so controlled by what I was told at school and at home.

I feel I have successfully confronted the assumptions of the Catholic Faith at that time by confronting them so they have lost their restricting power over me.

I have always accepted my inner self.

It is my exterior self I did not and have not yet fully accepted and I feel I cannot accept until I look more like I looked when I was working outside the home for the three years and felt happier and more fulfilled.

Until a few months ago I thought I had overcome my addiction to carbohydrates.

I had been eating high protein and low carbohydrate food for several weeks and my clothes were feeling more comfortable.

On this particular morning I woke up early and couldn’t go back to sleep. The weather had been cold and miserable for two days. The previous day I had stayed home typing on my computer. I felt sleep deprived and craved milk chocolate.

I had scrambled egg with ricotta and chicken for breakfast and I still craved milk chocolate.

I rang my sister to see how the surprise party for a woman we both knew had been and she said she would ring me back that night as she was going to Bridge.

I decided I needed to get out of the house and do some walking.

It was still cold, wet, grey and miserable.

have a cup of coffee while I looked for bargains at the sales most of the shops were having.

It had been some weeks since I had been to a seminar where I had been given names of organizations which use volunteer counsellors and I wanted to get down to goal weight and buy some new clothes before I made any enquiries and applications.

The football season was taking its toll on me as my husband watches the Rugby games on Friday and Saturday evenings at the Club or at home and spends the rest of the time reading about or talking about the performances or watching the videos of them for hours at a time.

Rugby seems to be his all encompassing passion and leaves me unreasonably angry and irritable as I feel totally excluded.

On the way to and in the shopping centre I still craved milk chocolate.

I looked in some of the shops while my husband had his coffee. I found nothing of interest and I still craved milk chocolate.

When we went to one of the supermarkets I was delighted to find that they had a sale on chocolates so I bought a bag of fifteen small bars of milk chocolate and two large 175g blocks of milk chocolate. On the way back on the bus I could hardly wait to eat as much of the chocolate as I could. The more I ate the more I wanted to eat. I bought two more 100g milk chocolate blocks with peppermint filling, at the local supermarket before I went home.

Normally I don’t eat while I am on the bus and normally I find milk chocolate sickly sweet and prefer dark chocolate.

I had not had a chocolate binge of that magnitude since I was a teenager and I wanted to understand what had triggered it.

This book is about my search for the truth about what caused or contributed to my life- long weight problem. In spite of my consulting doctors, nutritionists, psychiatrists, psychologists, psychotherapists, joining Weight Loss organizations and trying numerous diets, nothing had worked.

Because my lecturer in his feedback on one of my assignments in a counselling course said if I spent as much time looking at the “Inside Helen”- as I had on the outside Helen, “The weight may come off and stay off ” I did as he suggested by writing this book.

I looked at myself as a Greek Australian baby, schoolgirl, adolescent and adult. I connected with feelings I had previously supressed or repressed. I discovered information about eating disorders and the brain which led me to the confronting but liberating realisation that since childhood I had an undiagnosed Binge Eating Disorder. Later I found this could have been the result of forgott en trauma which had alienated me from myself and other people.

Finding the truth and reconciling myself to the past has freed me from eating compulsively. My weight is within the normal BMI range and I weigh less now than I did as a child of eleven.

HELEN GERONDIS was born in Sydney Australia, the elder daughter of Greek parents. She was not allowed to go to University when she left school, so she studied by correspondence when she had her first child and then enrolled at Sydney University studying Law in 1958.