Her battle with the blood disorder, Thalassemia Major. 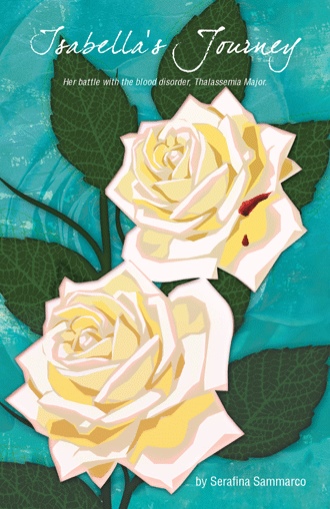 The main purpose of this book is to provide some insight on the genetic blood disorder thalassemia, and the rippling effects that it has on patients and their families.

I truly hope that this book will inspire and give hope to the many sufferers of poor health. I attempt to explain thalassemia in simple layman’s terms, and in no way claim to be a medical expert.

This is a story of one family that was faced with the unimaginable task of accepting the imminent death of a child.

Even though it has been a very difficult journey filled with obstacles to surpass, even after Isabella’s death, we, who have been left behind, continue to live productive and joyous lives.

I’m here to say that it is possible to be faced with tragedy and not only survive it but learn to appreciate life with all its wonders.

Thalassemia is not very well–known or talked about by the media and the general public although the medical professionals are much more aware of it now than they were at the time of Isabella’s diagnosis.

Everyone’s personal voyage is unique, but it seemed to me that my daughter’s journey was more challenging than most. And the feelings of isolation and the misunderstanding about thalassemia were not eased by the medical professionals who lacked the expertise to deal with this condition and its effects on the patient and the family.

My dream, as unrealistic as it may seem, is that one day thalassemia may be totally eradicated.

My other goal is to provide some hope and inspiration to those families who are currently dealing with thalassemia.

I want to ensure access to all of the available resources and, most importantly, quality healthcare for all thalassemia patients.

I decided to start the Vancouver Thalassemia Society just a few months after Isabella died, because I needed to continue the legacy that she had started with her willingness to help others.

The birth of this non-profit society, which initially started as an informal support group, was made possible with the help and dedication of numerous individuals who worked long hours with me to make it all come together.

The burning desire to write a book and make a difference goes back many years; but for a long time I felt too numb to do anything other than the everyday essential chores and activities.

I shelved this book project for many years and tried a variety of other things, like volunteering, studying and learning new things, and pursuing a career.

But the idea of writing Isabella’s story kept coming back to me. So, more than two decades after her death, I gave in to the urge that refused to go away.

My daughter was diagnosed with thalassemia major at the early age of eight months. With my son, Peter, a toddler only two years older than Isabella, I was suddenly overwhelmed by the responsibilities of being a new mom, and caring for a child with grave medical needs. Neither my husband nor I had ever heard of this illness before.

I was only twenty-three years old and Pasquale (Pat) was twenty-seven. Although we were both young, we took our responsibilities as parents seriously and we were very much in love. We had a strong bond from the very beginning; this bond would carry us through the difficult times ahead.

There are many reasons why I want to tell Isabella’s story, but two most important ones come to mind. One is to educate and provide some information on what thalassemia is and how deeply it affects the entire family. The second is that although this has been, without a doubt, a very difficult journey for our immediate and extended family and friends, I wanted to write about how this experience has also enriched and touched our lives in a very profound way. Thalassemia is a virtually unknown blood disorder and yet it affects so many people all over the world, either directly or indirectly.

I say directly or indirectly because there is more than one kind of thalassemia.

Thalassemia is a severe and particular form of anemia in which the body does not produce enough healthy red cells. It is these cells which carry oxygen from the lungs to all parts of the body. Therefore, a shortage of these cells means that the body is deprived of oxygen.

The severity of the disease can vary from one individual to another, depending on a number of reasons.

There is a theory that because the thalassemia trait has some resistance to malaria, the disease has evolved in regions where malaria is prevalent.

The Various Levels of Thalassemia

A) Thalassemia minor, where an individual is only a carrier of the gene and can lead a normal, productive and healthy long life; no transfusions are necessary.

B) Thalassemia intermediate, where a carrier may need a transfusion from time to time. This can be difficult because there is no established routine on how often a carrier should receive blood transfusions.

C) Thalassemia major, where an individual has inherited the thalassemia gene from both parents, therefore the body does not produce enough red blood cells to survive and consequently will need regular blood transfusions.

Alpha thalassemia is most common among natives of China and Southeast Asia. It can cause miscarriage, stillbirth or death shortly after birth.

Thalassemia is a genetic blood disorder. That means that it is an inherited condition present from the moment of conception. It cannot be caught from another child nor can it develop later in life. The disease is passed on through parents who both carry the thalassemia gene in their own cells.

As Pat and I are of Italian origin, Isabella inherited beta thalassemia major.

When both parents are carriers of the thalassemia gene, the risk of their children having the blood disorder are as follows:

There is a 1 in 4 chance (25%) with each pregnancy, that the child will inherit the thalassemia gene from both parents and therefore have the disorder called beta thalassemia major.

There is a 2 in 4 chance (50%) chance with each pregnancy that the child will inherit the thalassemia gene from only one parent and a normal gene from the other and therefore be an unaffected carrier like the parents.

There is a 1 in 4 chance (25%) with each pregnancy that the child will inherit normal genes from both parents and therefore be completely unaffected.

Isabella was known by her family and friends for her tremendous zest and respect for life; with a sparkle in her eyes and a contagious smile, she taught those around her to appreciate their lives and to love one another.

Although she was very much aware from an early age that her life would be short, this knowledge did not stop her from living with a purpose and making each day count.

Isabella was diagnosed at eight months with Thalassemia Major – a genetic blood disorder – that required her to have regular, monthly transfusions to survive.

She fought vigorously to overcome the numerous obstacles that she encountered during her brief life, until her small body could fight no more. Isabella died two months short of her fifteenth birthday. This book is the heartfelt, truthful account of a brave soul and her dedicated family. It is a story that will touch all who read it and inspire those looking for guidance and hope.

Born in Calabria Italy, immigrated to Canada at age twelve - the eighth of nine children. Married for forty-four years to Pasquale Sammarco, and mother of two children. Held a career in the insurance industry for twenty years as an Accredited General Insurance Broker.

Founder and president of the Vancouver Thalassemia Society of British Columbia. Past president of a woman's lodge in the Italian community, doing volunteer work for the Vancouver community. Serafina cherishes family and good friends and loves to engage in intellectual and meaningful conversations.

Loves to dance with husband Pasquale and special group of friends. Enjoys long walks in nature to help clear the mind and restore the soul.